The 1989 Fargo Air Show was a North Dakota Centennial Air Show. One of two. The other being in Minot in July. This was going to be a big show. There were a lot of unique aircraft scheduled both in the air and on the ground. The Fargo Forum ran a number of articles about the 1989 Fargo Airsho and the 1989 North Dakota Centennial Aviation Celebrations. I was excited, as was my friend and fellow aviation enthusiast: Bob Nelson. It was a weekend show, with the USAF ‘Thunderbirds’ flying on Sunday. I had rented a 500mm CAT lens, and got the odd idea to get two rolls Infrared B&W film- I wanted to do something different.

Friday 8/18, Bob called me at work. He was watching aircraft arrive from the north end of the runaway I joined him after work. He let me use his Nikkormat, 180mm lens, 2X extender, and monopod. I was in time to photograph the Top Gun F–5E ‘Tiger II’ and A–4 ‘Skyhawk’ Aggressors from the Miramar Naval Air Station. We also photographed the Georgia ANG F–15A ‘Eagle’ landing at 7:00. I went home. I should have attended Friday night’s banquet talk with General Chuck Yeager at Centennial Hall.

Saturday 8/19, I left early and picked up Bob. I used his bathroom to load the infrared (IR) film as it has to be loaded and unloaded in total darkness. There are many World War II era aircraft from the Confederate Air Force (CAF) ‘Ghost Squadron’ lined up on the south taxiway. The current Navy and Air Force aircraft are to the north. (see my crude map below)
I have to leave Bob and head home. I’m taking my parents to the airport, and I change IR film in the bathroom.
I got back in time to see the US Army Golden Knights parachute team jump. This was followed by aerial demonstrations by the CAF’s WW-II aircraft, Valley Skydivers and a Russian Mig 15 ‘Faggot’. During a lull in the aerial action I photograph the A–4 and F–5 from the Navy’s Top Gun School. Then the F–16B ‘Fighting Falcon’, RF–4C ‘Phantom II’, F–4D, F–4E, F/A–18A ‘Hornet’, F–111A ‘Aardvark’, and F–15A. I chat with the F–16B pilot from the Montana ANG. We watch Jim ‘Fang’ Maroney fly ‘Lil Toot’ in some aerobatic routines. Jim is followed by Bill ‘Burner’ Beardsley in the BD–5J ‘Bud Light Micro Jet’.
From the Grand Forks AFB, a KC–135R ‘Stratotanker’ flies by. It is joined by four F–4D of Fargo’s NDANG ‘Happy Hooligans’. The GFAFB also is home to the B–1B ‘Lancer’, which makes a couple passes. Another ‘Lancer’ is on display in front of the old Hector terminal building. It’s guarded by an armed airman. Bob and I call it: The Ring of Death. The MiG–15 flies. I yell at Bob, “He’s really tearing it up.” It was so loud, Bob can’t hear me. The South Dakota ANG fly a pair of A–7 ‘Corsair II‘s. Nine Golden Knights went up to jump again. They presented the mayor with a baton once they got their parachutes stowed. The announcer asks, "Will the owner of a 1971 Dodge Duster to please move your car or it will be towed." This announcement is repeated all day. When they announced the Duster belonged to Vince Linstrom I knew it was a joke. There is was- being towed by a UH–1 ’Huey’ helicopter. It was dropped in front of us. It landed with a strange thump.
The aerial demonstrations were over. No F–15 flight. I stop and chat to the Civil Air Patrol members in front of their Cessna. I stopped at Robert Odegaard’s Grumman TBM ‘Avenger’ torpedo bomber. It was painted in honor of the one President George H. Bush flew during World War II.

Sunday 8/20, Bob and I set up on the 12th Avenue bridge. We hope this will give us some interesting views of the aircraft as their fly overhead on their way to the Hector field. The wind is 15 mph and the clouds are low. The US Army Golden Knights cancel their morning jump. We see the USAF ‘Thunderbirds’ in the distance. I find the 500mm lens too long; too slow under these dark clouds. I borrow Bob’s 180mm lens again. The Thunderbird’s KC–141 ‘Starlifter’ support aircraft flies overhead. The CAF are out with their B–25 ‘Mitchell’, F–4U ‘Corsair’, and T–28C ‘Trojan’. We leave for lunch at Dairy Queen.

Bob finds an open spot on the fence line. We’re late so it’s far to the north of the center line, but we have good site lines. The Golden Knights were jumping. I left Bob to photograph the static displays with my 28mm wide angle lens. Some jets were crowded, some were not. I rejoin Bob as we wait for the USAF Thunderbirds’ to fly their F–16A ‘Fighting Falcons’. Once they do, it’s all very fast and exciting. I feel unprepared: the 500mm CAT lens is too long. I switch to my 135mm and infrared film. There isn’t time to switch to Bob’s 180mm lens. The T-birds do some maneuvers the Blue Angels don’t and vise versa, but the F–16 ‘Falcon’ is a better aircraft. The crowd begins to leave as the Falcons land, so I walk up the fence line for photos of the Thunderbirds’ as they taxi and park. I finish my slide film. I still have IF film. I wait for people to move away so I can photograph more jets. (27 years later, I’m amazed by all the aircraft I didn’t photograph.) Jet noise returns as aircraft preparing to leave the show (MiG–15 is the first.) I’m out of film and money. I borrow a dollar from Bob to make a donation. I don’t even have $2 for the 1989 Fargo Airsho Program (Google Docs, text only as the images didn’t transfer. I do have a PDF and HTML file with the imagines.) 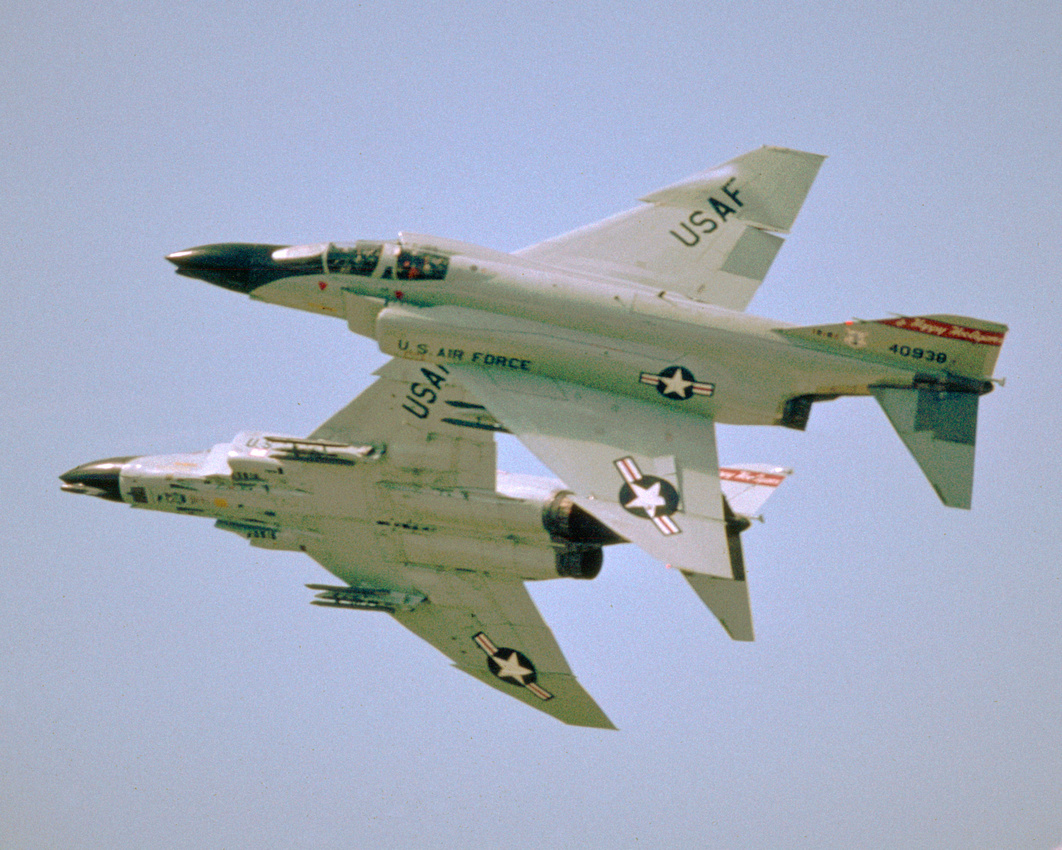 See the full Gallery or the Gallery slideshow for more photos from the air show: 210 total including detailed photo/airplane descriptions.

Photo descriptions come primarily from Wikipedia and Warbirds Registry . See below for additional links. I have access to additional historic information from 1989 Fargo Forum articles, and the 1989 Fargo Airsho Program.

Note: colored links in the ID column lead to photos of the aircraft in the Gallery. There were lots of aircraft at the airshow that are not listed including quite a few experimental aircraft from the EAA. I’m also missing photos of some aircraft that are listed, but are behind other aircraft.

The history of the McDonnell F–4 ‘Phantom II’ is interesting. “The USAF received Phantoms as the result of Defense Secretary Robert McNamara’s push to create a unified fighter for all branches of the military.” (wiki) This was a bad idea. The F–4 was designed by the Navy for carrier use; a good platform for multiple types of missions, but as a pure fighter it left a lot to be desired. The US Navy had their own variants: the ‘B’, the ‘J’, the ‘N’, and the ‘S’

It’s hard to tell the different versions apart. The nose is the best guide.

F–4C
The ‘C’ version was based off the Navy’s F–4B. It lacked any internal gun. This aircraft wasn’t good enough for the Air Force’s fighter requirements, so once the F–4D came online, the ’C’s were converted to RF–4C reconnaissance aircraft; with a stretched nose loaded with cameras rather than guns.
F–4D
The ‘D’ version featured an enhanced AN/APQ–109 radar with solid-state components in the low-voltage sections. The F–4D also featured up-rated electric power generators, new attack and navigation systems. The F–4D was wired for the SUU–23/A cannon pod, with a matching ASG–22 lead-computing gunsight fitted for aiming it. The AN/AAA–4 IRST (infrared sensor) fairing under the nose was deleted in most F–4D. However, late production F–4Ds kept the fairing for use with an AN/APR–25/26 radar warning receiver. This was the aircraft the North Dakota Air National Guard received in 1977 to replace their aging F–101 ‘Voodoo’ interceptors. The NDANG F–4D Phantoms carry the “Happy Hooligan” moniker on their tails.
F–4E
The ‘E’ version has a much longer nose to fit an internal M61A1 six barreled Vulcan cannon and a smaller solid-state AN/APQ–120 radar. Uprated J79-GE–17 engines, zero-zero ejection seat, fixed slat on the tail-plane, a 7th fuel cell, and manual folding wings. The F–4E was the primary USAF variant
F–4G ‘Wild Weasel V’
The ‘G’ version was a post-Vietnam modification the ‘E’ replacing the cannon with an AN/APR–38 RHAWS, with 52 antennas littered over the fuselage. This radar could locate and identify radar emitters, target them for attack with ARMs, or cluster bombs and other munitions; including the Texas Instruments AGM–88 "High Speed Anti-Radiation Missile (HARM).

McDonnell F–4D ‘Phantom II’ painted dark blue as the North Dakota Centennial Aircraft.
A member of NDANG ground crew guy told us this aircraft had numerous stress cracks. While performing acrobatic maneuvers, it was pulling 8.5 Gs. Neither Bob nor I got any photographs of this aircraft performing, and now I question whether it flew on either day. 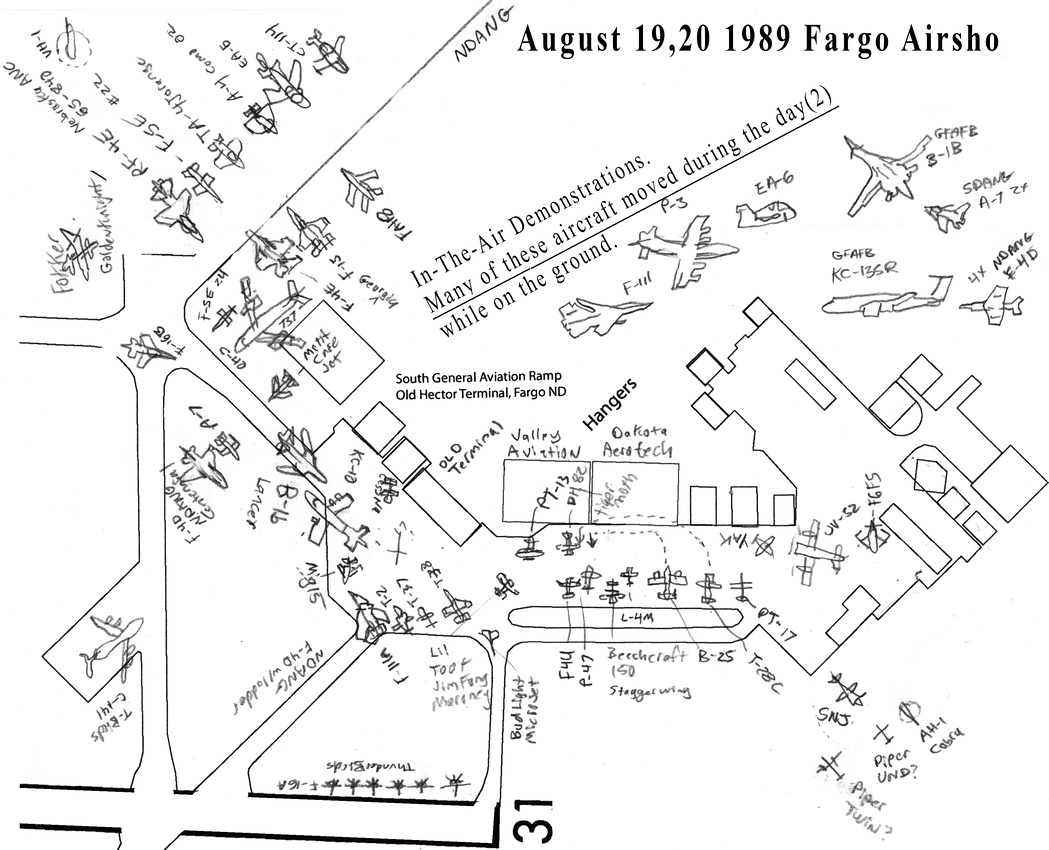 1989 Fargo Airsho MapI drew this map to help locate the aircraft in my photographs. It's not to scale and there are errors. Also many aircraft were moved during the day(s) as they flew demonstration flights.