Background:
The Collings Foundation's Liberator was built in 1944 at the Consolidated Aircraft Company's Fort Worth, Texas plant. The aircraft was delivered to the US Army Air Force, and in October of 1944 was transferred to the Royal Air Force. The B-24 saw combat in the Pacific Theater as KH191 in operations ranging from anti-shipping to bombing and re-supply of resistance force operations.
At war's end, the aircraft was abandoned by the RAF in a bomber graveyard in Khanpur, India; with the assumption that it would not fly again. However, in 1948, the Indian Air Force succeeded in restoring 36 B-24's, including 44-44052, to operational status. These aircraft were utilized until 1968.
For the next 13 years, the aircraft again sat abandoned in India until British aircraft collector, Doug Arnold, obtained it in 1981. Once in England, the aircraft was advertised for sale in "as is" condition and in 1984, Dr. Robert F. Collings purchased it. After a sea voyage of three weeks, the B-24 arrived in Boston and was brought to Stow, MA in four truckloads.

Collings Foundation intended to restore the plane for static display only, but was persuaded to restore it to flying status by local B-24 crewmen. Preliminary restoration work started in 1985, led by Massachusetts volunteers. When Collings decided to make the plane a flying restoration, the aircraft was moved to Tom Reilly Vintage Aircraft in Kissimmee, FL to complete work on the airframe and power plant.
The restoration involved complete disassembly of the plane and work on about 80% of the B-24's 1.2 million parts. On September 10, 1989, after more than five years of hard work and 97,000+ hours of labor, the B-24 flew for the first time after restoration.

Starting a new life in 1989, our B-24 was painted in honor of the original "All American," a 15th Air Force aircraft that flew in Italy with the 461st Bomb Group. In 1998, she was repainted to represent the "Dragon and His Tail" a 5th Air Force B-24 flying in the Pacific Theater with the 43rd Bomb Group. In 2005, she was repainted as "Witchcraft" in honor of the veterans of the 8th Air Force, who flew in the European Theater during WWII. The history of the original "Witchcraft" is a story that legends are made from. "Witchcraft" flew an incredible 130 combat missions and never turned back while on a mission, and never had any crewmen injured or killed. 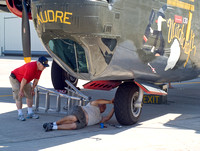 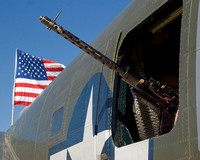 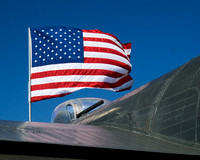