By 2006 I was regaining my enthusiasm for airshows. My friend, Bob Nelson was ready to take a roadtrip north for Friends And Family Day at the Grand Forks Air Force Base. The highlight was the USAF Thunderbirds. There was also a B–2 ‘Spirit’ Fly-by, and some interesting NASA aircraft on display.

At the south entrance we were guided across an uneven field, which was fine for the trucks, vans, and SUV, but for the Buick it involved a lot of bouncing and bottoming out. Because of the war? There was a higher level of security: metal detectors and detailed searches. They loved Bob’s large camera bag. Thankfully we were there early; there was no line. They did a wand search of Bob and inspected all his camera gear. We took a bus to the flight line. All I could see were a KC–135R Stratotanker, a C–5B Galaxy, and a Fed Ex 727- that was all. I was crestfallen. We were just in time for the B–2 ‘Spirit’ fly over. There was a 90-minute break before the Opening Ceremonies. “Let’s wander around and check out rest of the static displays.” We found a WW-II Warbirds display with a B–25 ‘Mitchell’, a Yak–11 ‘Moose’, TBM–3E ‘Avenger’, P–51D ‘Mustang’, and F2G ‘Super Corsair’. As we cleared the displays, the show stretched almost all the way to the north apron: something I’d never seen at the GFAFB before. Almost all the aircraft listed on their web site were on display. I was happy again. We spent some time photographing the aircraft, The CAP Cirrus SR–10, the RCAF CT–155 ‘Hawk’, two A–10A ‘Thunderbolt II’ attack planes, two new C–17A ‘Globemaster III’ cargo aircraft, and a F–16A ‘Falcon’ from the NDANG “Happy Hooligans”.
UND/NASA had a DC–8 research aircraft parked in the hanger and a F/A–18B ‘Hornet’ on display with luggage pods under its wings. Also in the hanger, a NASA astronaut was signing autographs. NASA had spacesuit cutouts. I had Bob kneel behind the child-size suit. It made for a funny photo. The clouds were almost gone and it was hot out. We both brought frozen water along.

The C–17A took off with the Army’s ‘Black Daggers’ parachute team. Kids chased the drift ribbons. It’s windy today and yet each parachutist hit the target. The C–17 has the same engines as the Boeing 757, but four of the GE fan jet engines so it really climbs. I went for lunch during the aerobatic demonstrations.

The Warbirds flew back and forth. It was interesting watching them fuel and prep the Moose, Avenger, Mustang and Super Corsair in front of us. We had the pick of spots, so we choose a spot just south of the Warbirds, north of the Thunderbirds between the PA speakers.

The USAF Thunderbird show was situated in the middle of the afternoon because they had to fly to Wyoming today. The Air Force recruiter marched a bunch of kids to center stage; right in front of the Thunderbirds, to administered the Oath of Office. It was a moving ceremony. We all cheered loudly.
The Thunderbirds taxi to the end of the runaway. They pause there for some time, but once the show starts it’s zoom, zoom, zoom all the way to the end. I didn’t photograph much, I wanted to enjoy the show. The crowd was surprised by the low fast sneak fly-by. We know it’s coming but it came from the south rather than from behind. (East) The formation flew like they were one aircraft. They landed and taxied to the flight line. Bob and I waved to Thunderbird #3, Major Nicole Malachowski, the Thunderbird’s first female pilot. She waved back.

Julie Clark performed aerobatics in a T–34 ‘Mentor’ trainer. We head back to the NASA hanger to chill out for a few minutes. I found the water supply and soaked my hat and refilled my water bottles. At the GFAFB first aid station, they were giving out water, sunblock, running water on a golf cart around the field, and bringing back sunstroke victims.

I toured the DC–8 UND/NASA “flying laboratory” aircraft and then watched Bob’s camera gear as he took the tour. Back in the sun we caught the tail-end of the GFAFB KC–135R ‘Stratotanker’ fly-by. Bob and I toured the inside of the C–17 ‘Globemaster III’. The aircraft has a cockpit portal looking out into the cargo area. They have a crow’s nest at the top of the plane. Bob was photographing the cockpit; I was photographing Bob, when we heard a jet go screaming past. It was the last demonstration of the air show: an F–15C ‘Eagle’ from Langley AFB. It was very fast; wild how quickly it could climb vertically. I remember when the ‘Streak Eagle’ set time-to-altitude records at the GFAFB. It was winter 1975; the ‘Streak Eagle’ stopped in Fargo. I saw it flying around and was exciting to see. 1, 2
After the impressive F–15C ‘Eagle’ fly-by, we photographed the aircraft on static display as the crowds thinned out. We slowly walked back to the south end.
There were about 4,000 people waiting for buses and not many buses. It’s only half a mile to the car. It feels like 180 degrees inside the Buick. I open the doors, and roll down the windows and wait for Bob to catch up. Set the air conditioning to maximum. An airman knocks on the window; he points to another exit and suggests it will be faster. I thank him. Traffic control is no trouble with thousands of airmen manning every intersection. I’m still amazed traffic is moving so fast. The ND Highway Patrol has stopped traffic on Highway 2 and is waving us on. 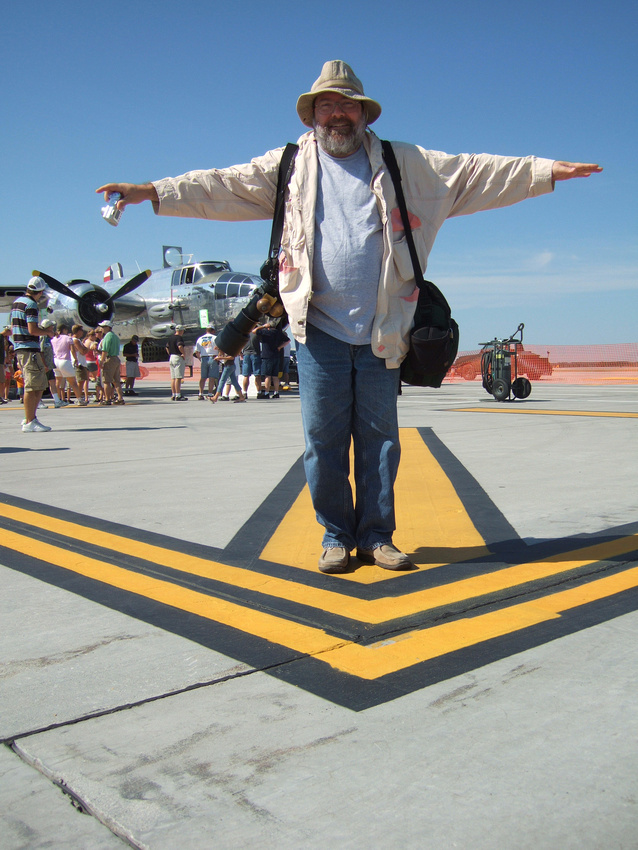 Bob Nelson: Straight And LevelJuly 22, 2006 at the GFAFB, Bob 'flying' in front of the B-25J 'Mitchell' WW-II Medium Bomber. The same model his father flew in. 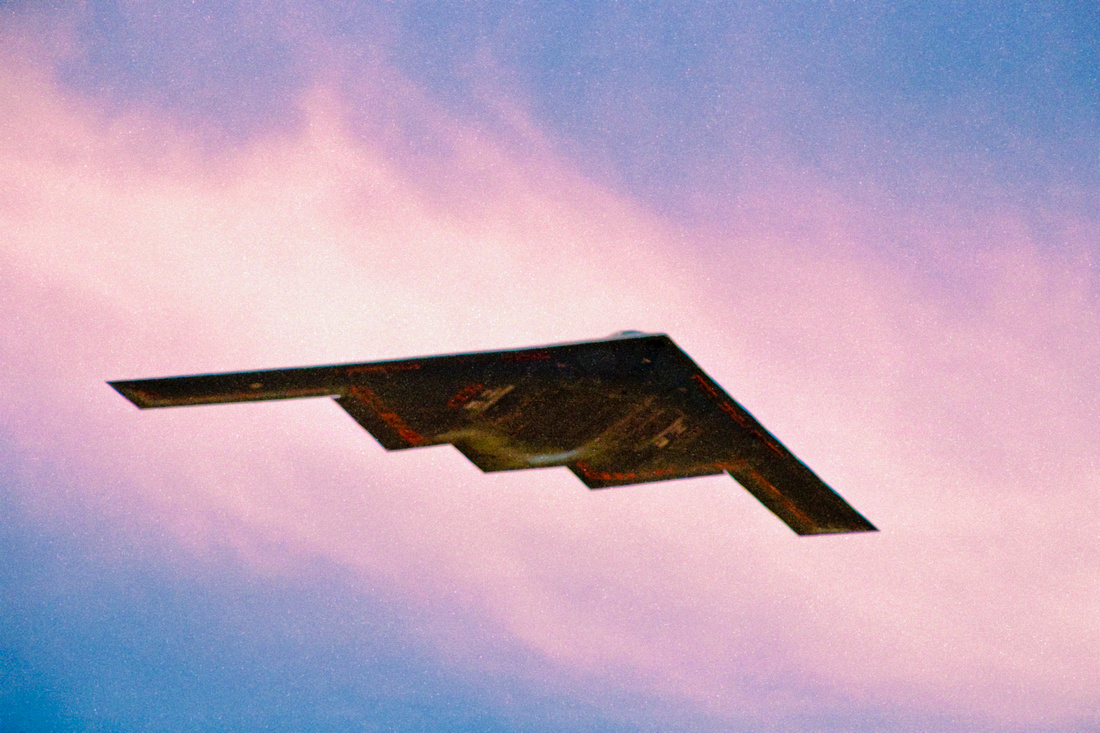 The Spirit Moves MeNorthrup B-2 'Spirit' fly-over. Photo by Bob Nelson on Saturday, July 22, 2006 at the Grand Forks Air Force Base. The color balance on this scan was way off but rather than fix it in Adobe Photoshop, I pushed it even further. 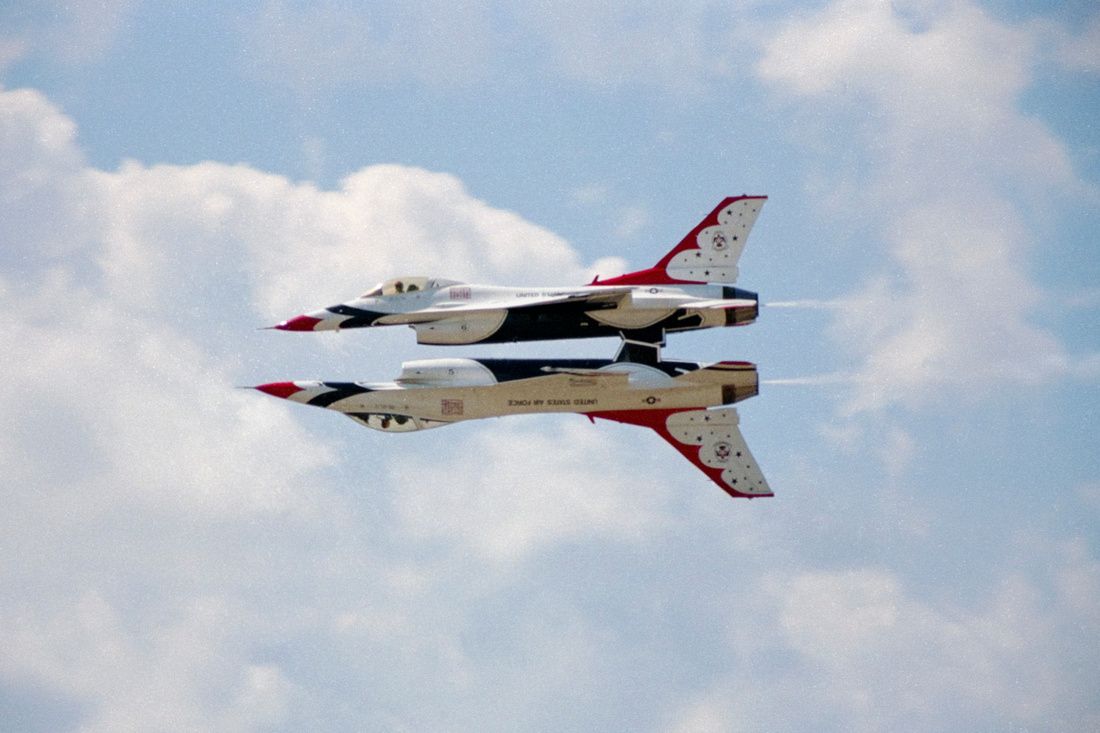 Craig Maas
I wrote this tongue-in-cheek, days before the show...

..what this really means is we'll be lucky if we see a Piper Cub ;-)
When we first walked in all I could see was a KC-135R, KC-10 and a 727 from Fed Ex. I was very crestfallen. When we walked half-a-mile to the north, the flight-line was full of listed aircraft.

* 0730 Leave Fargo after waking up Bob
* 0900 Bob gets strip-searched after bring in a 'Large' Camera Bag. Luckily the Sergeant doing the search is a cute blonde who is impressed by his big 'lens'.
* 1140 Bob and Craig find a good spot on the fence line. Bob grows hot in his parka. Even though it's 82 degrees outside, Bob isn't taking any chances.
* 1145 Army Black Daggers land on Bob. This turns out okay due to the cute blonde who turns out to be an Black Dagger. Bob gets a great photo up her 'chute'. Craig gets a great photo of the tangled lines.
* 1155 Bob and the Dagger disappear, but only for ten minutes and the Dagger's chute is repacked- whatever that means?
* 1205 While the aerobatic planes zig-zag through the sky Bob and Craig get something to eat.
* 1220 USCG Search & Rescue Demonstration- The Coast Guard looks for water- without any success.
* 1230 A mock dogfight ensues but it's between Bob and Craig over which is the cooler plane- the Mustang or the Corsair.
* 1250 Bob and Craig wet themselves as they finally get to see a B-2A Spirit stealth bomber!
* 1305 Craig plugs his ears as the announcer drones on and on about the C-17 freight characteristics.
* 1400 After another insufferable wait the USAF Thunderbirds finally take off.
* 1515 The crowd files out as Julie Clark does aerobatics. Bob and Craig wait it out. Craig takes a nap.
* 1530 Craig is rudely awaken when the US Army Black Daggers Parachute Team Combat Equipment crashes right beside him.
* 1532:30 Bob comes out from under the cute blonde's parachute with a smile on his face.
* 1555 More photos are taken, film is shot, and cards are filled.
* 1700 Bob and Craig are escorted off the base, as they are the only two guests left on the base.
* 1705 Bob hides behind the seat as we pass the cute blonde Dagger and her enormous buff boyfriend. He looks none too happy and is cleaning his fingernails with eponymous Black Dagger.
* 1730 Chimicongas at Paradiso in Grand Forks.
* 1915 Fargo, and mission accomplished.
* 1920 As Craig is leaving Bob's house he notices black parachutes descending from the sky. Craig rolls down the window, points up in the sky and yells, "You're on your own", while putting pedal to metal.