After years of flying the F–4D ‘Phantom’ the North Dakota Air National Guard (NDANG) would be trading up to the F–16A ‘Falcon’. I was pretty excited as the F–16 was (and still is) my favorite aircraft. The F–16 first saw service in 1979 and was designed by one of the greatest military minds of all time Col. John Boyd (USAF). The F–16A is a gorgeous aircraft and maybe the best fighter bomber ever built.

My friend, Bob Nelson, must have been more excited than me. He was at the airport in April of 1990 photographing the last flights of the F–4D and first flights of the F–16A. Bob also photographed the unit’s C–130 ‘Hercules’, which by 1991 was flying support missions within the US for Operation Desert Storm.

Bob was back in July of 1990, when training was in full swing. He got photos of the squadron doing touch-and-goes. And even a T–38A ‘Talon’ trainer got in the act. We got together on Tuesday July 17, 1990 at Giovannis Pizza for lunch. Bob was telling me about photographing F–16 at the end of the runaway. This is how I arrived at the date on these photos. I was so jealous.

Bob and I race northwest of NDSU. A plane ‘cloaks’ behind the residency halls. I exclaim it’s a B–1B. Bob didn’t believe me as I’ve been ID’ing Cessnas as F–15 ‘Eagles’ so when it ‘de-cloaks’ (coming from behind the hall) there it is - a B–1B ‘Lancer’ bomber. I give Bob crap for missing it. We could have been there 15 minutes ago. We wait in the car. (It is sunny, but the wind is cold.) Using Bob’s scanner, the Hector control tower would announce F–16 on approach. We can hear it coming but can’t see it until it’s on final approach. The landing light obscures its dark outline in the bright blue sky. It’s almost on top of us when we see it. We hustle out of the car to photograph the ‘Falcons’ as they fly overhead; then race to the north end of the runaway before they taxi back to the hangers. That was it. 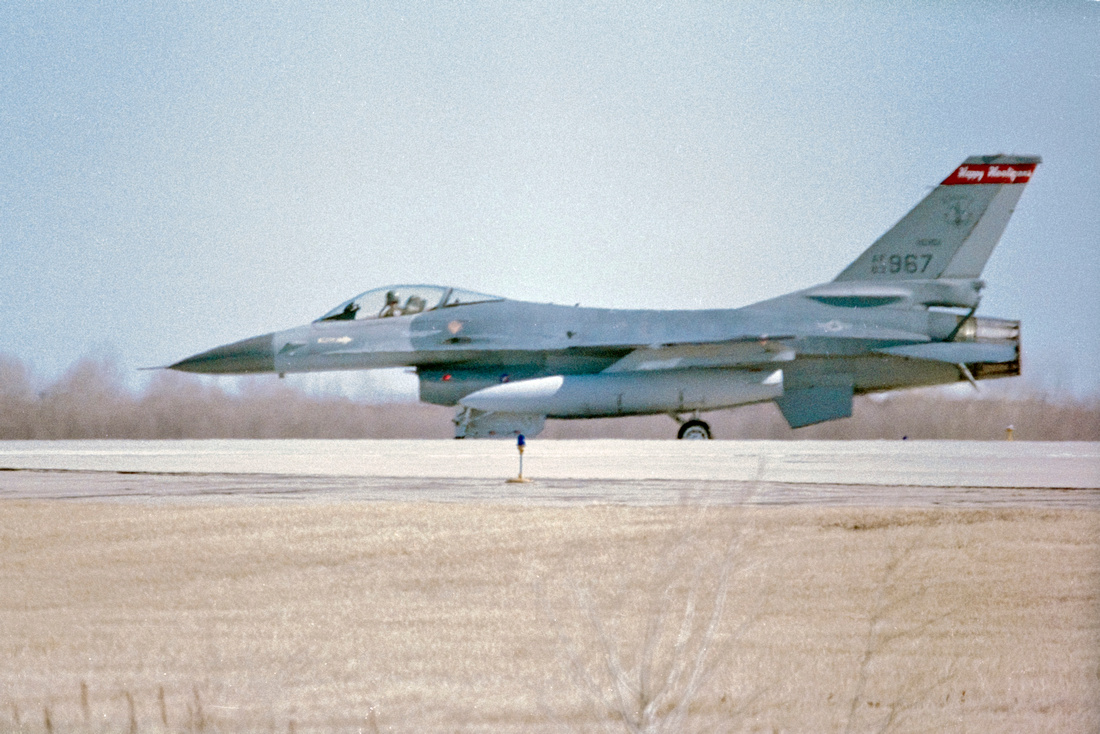 See the full Gallery or the Gallery Slideshow for more photos from the air show: 76 total including detailed photo/airplane descriptions.