Friends And Neighbors Day, at the Grand Forks AFB

The weather is clear, warm and sunny but with a 40 mph wind.  Although I didn't seem them, about 20 protesters greeted visitors to the base with signs reading "Stop the Arms Race," and "U.S. Air Force: Good People, Bad Product."

My friend, Bob Nelson, and I aren't expecting much more than last year's displays. There are a few new inclusions: an A-7 from the SDANG, TR-1A (U-2S), a B-52H from the Minot AFB, a P-3C Orion, FB-111, and it's cousin the EF-111. A UH-1 Iroquois (Huey) helicopter demonstrates over the Canadian CT-114s. At 1:45 pm we find a spot on the edge of the flight line, the Snowbirds take off. They disappear for 15 minutes. They have nine aircraft; flying routines all over the field like a swarm of bees. Their fly bys were close.

After the show, the security guy opened up the B-52H. We were first in line but the line moved and we were in the back of the line. I tried to compose shots, without people walking in my frame. I went around the B-52H photographed the bomb bay. The B-1B took off 15 minutes early. The KC-135R 'Stratotanker' flew by. The B-1B 'Lancer' followed pulling a tight turn right over the field. It scared all the kids. It was louder than my Stratocaster, even louder than the Who! The ground shook under the four afterburners. Everyone plug their ears. The kids were rolling on the ground in terror. The B-1B swung north and disappeared. Bob and I knew they'd be back for a bomb run. The B-1B came screaming in from the North. I didn't see the bomb blast until it was too late. Bob looked at me, I looked at him, shook our heads, like last year we missed it again!

At 4:00 the Montana ANG F-16 Falcon was still crowded. I checked out GE's CFM jet engine display, this engine has greatly improved the performance of the KC-135R. 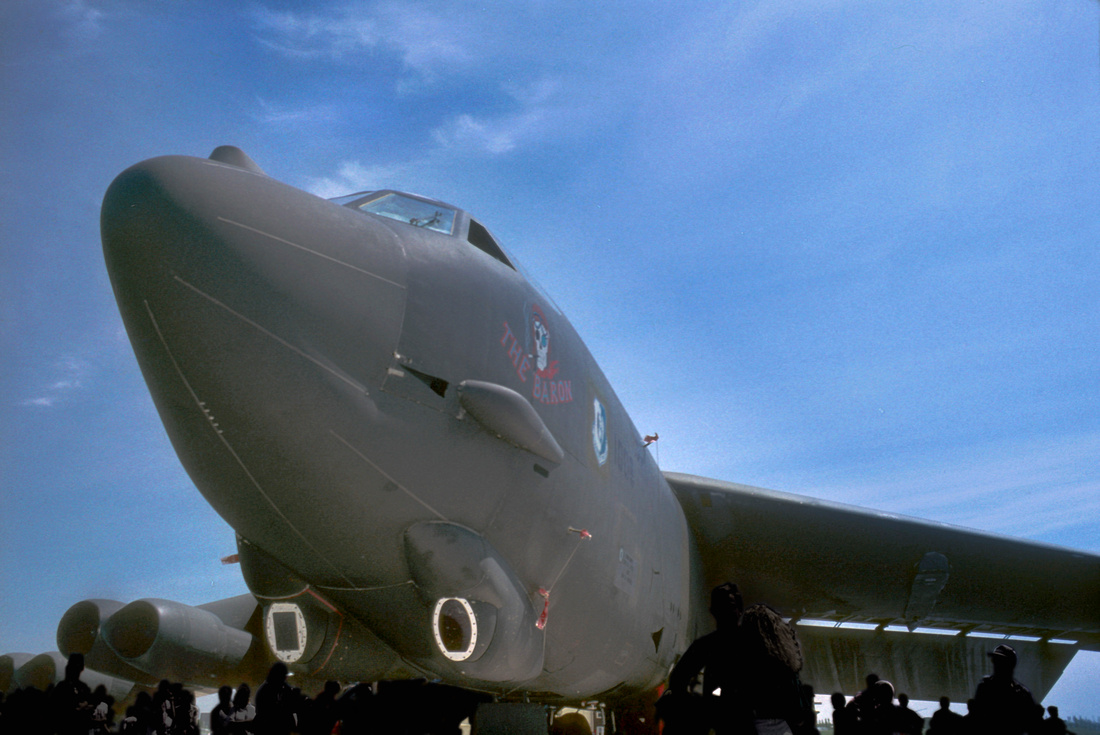 See the full Gallery or the Gallery slideshow for more photos from the air show: 78 total including my detailed photo/airplane descriptions. All the Black & White photos are © Bob Nelson as are some color slides, many thanks.

I have scanned and made available additional GFAFB Information from the Grand Forks Herald, which I used to refresh my memory and fill in some gaps to my journal.