The 2015 Fargo Airsho is back after four years. This year featuring the U.S. Navy's Blue Angels, the USMC demonstration of the AV-8B 'Harrier II', and six acrobatic aircraft. The only thing this airshow didn't have was much in the way of static displays.

Thursday, my friend and fellow aviation photographic enthusiast, Bob Nelson, had scouted the area around the airport and suggested University Drive and 36th Avenue North to photograph rehearsal day. This was a great location to photograph the U.S. Navy Blue Angles. They flew over our location a dozen times. We had good site lines for the most part. The Blue Angels 4-plane Diamond formation went up first. After a short delay to land an Allegiant Flight 426 running short on fuel, (Forum) the Blue Angel solo pilots went up and flew practice passes.
Later in the afternoon, the Blue Angels flew more practice routines over our house (video).

Friday, I went to the NDSU rugby field just south of the runaway. I had planned for an hour long Blue Angels practice. Instead, the afternoon kicked off with the USMC AV-8B 'Harrier II', followed by the acrobatic planes. Bob joined me around 2 PM in the cul-de-sac. The afternoon clouds broke up the USMC C-130T 'Fat Albert' took to the sky followed by the US Navy Blue Angels with their F/A-18C 'Hornets'. A crowd of fans wandered onto the field, as did a dozen large jackrabbits. (The jets must have disturbed them from their homes.) A Fargo motorcycle cop chased everyone back behind the barricade just before the Blue Angels landed. Apparently the field is a designated crash zone.

Saturday opened with clear skies in the morning followed by afternoon clouds and a trace amount of rain. I went on the roof and photographed the Blue Angel show from there. (video)

Sunday, I arrived at the airport with my nephew before 11 AM and watched the entire show. We found good (non-VIP) seating in the NW corner. The weather was clear and warm all day. [Links on the show times go to that set of photos]

11:21, Lt. Col. John Klatt and Skip Stewart flew their acrobatic aircraft in tribute to Jim 'Fang' Maroney. Jim died in a crash last year. In years past Jim was fixture in local air shows with his Super Chipmunk acrobatic airplane.

11:35, A WW-II bomber: B-25J "Miss Mitchell" made a couple simulated bombing passes. This included a Pyrotechnic display on the ground to wake up the campers.

12:19, Kyle Franklin flew "Dracula" which was interesting: Kyle sits way back in the fuselage as the 500 hp direct-port, fuel-injected R-985 Pratt & Whitney engine rockets this acrobatic aircraft threw the sky.

12:43, Kent Pietsch was back trailing yellow and red smoke. He landed his Cadet on top of a moving pickup truck.

Because we were seated on the NW corner, we were also right next to the taxiway, were the military aircraft were staged. I took a break from the sky and talked with Gunny Sargent Micah Bachtold and Staff Sargent Zach Williford of "Fat Albert Airlines". These USMC NCOs serve as Flight Engineer and Flight Mechanic on the C-130T 'Hercules'. The USMC also had a newer C-130J 'Super Hercules' there to support the "Leap Frogs" parachute team. The USMC also had three AV-8B 'Harrier II' at the ready. The fourth Harrier was on static display near the food courts. I watch as the crew prepare the aircraft and it taxis out.

1:33, The USMC demonstrated their AV-8B 'Harrier II' by taking off vertically and hovering behind the Blue Angels. A 22,000 lbs thrust engine enables the 'Harrier II' to hover like a helicopter, and then transition to normal fighter jet speeds.

2:08, Red Baron. I was looking forward to seeing this PT-17 Boeing Stearman aircraft painted in the classic Red Baron (frozen pizza) Squadron colors. I use to see them all the time in the 1980, but they folded the squadron in 2000(?). I joked that I paid for the entire squadron single handed with all the Red Baron pizza I ate.

2:20, Kent Pietsch turns off the engine of his Interstate Cadet at 6,000 feet and does a complete acrobatic show with no power before coming in for a dead stick landing.

2:29, Skip Stewart and Kyle Franklin come back out and mix it up a little bit. Sort of a dogfight/ twin acrobatic display as they wait for..

2:32, Paul Stender (Indy Boys Inc./Speed for Hire) takes out his jet-powered school bus, "School Time" and races Kyle Franklin's "Dracula". The guy beside me is laughing with delight. Stender burns a lot of jet fuel and fills the taxiways with smoke and flames.

3:02, The USMC sends up their C-130T "Fat Albert" to show off the capabilities of their Blue Angel support aircraft. The short field 'Combat Landing' is impressive. They can land in a hurry. I think Micah waves from on top of the aircraft as they taxi back to their spot.

3:24, The U.S. Navy Blues Angels flying their Boeing F/A-18 'Hornets' take to the sky after their ground demonstration. Many fast-paced maneuvers in their famous formations: The four-member 'Diamond', five-member 'In-line' and six-member 'Delta' formation.

4:16, I join the family (and everyone else) in the race to get ahead of the crowd leaving once the Blue Angels land. I did not get a chance to view the Static displays (AV-8B 'Harrier II') and vender tents. There was very little on static display. There were used cars for sale by dealers, farm tractors, air show souvenir tents, food tents, military recruiters, the U.S. The Navy Band Great Lakes 'Horizon', and games for the kids. A few quick stops on the way out. Civil Air Patrol has their Cessna Skyhawk on display and a new glider. UND brought a twin engine turbo-prop. The ND Military Vehicle had a display of old (WW-II) military trucks, half-tracks, and jeeps on display. (ndmvca.com) (my NDMVCA photos from 2012)

The day moved so quickly in the air that I never felt bored and didn't move far from my lawn chair. By 2 PM it had gotten hot, but not oppressively so. Traffic after the show wasn't very bad. We were on the Interstate in a matter of minutes.

I didn't carry a lot of photographic gear. I almost didn't bring my 500mm CAT lens. It ended up being pretty useful with the propeller driven Acrobatic aircraft. They tend to stay right above the viewing area. The lens is like a small light telescope, so even if I'm not shooting, it gives a great view of what's going on above my head. My 10-20mm Sigma lens stayed in the bag. My Sony 70-300mm got the most use. I also brought my Canon S-110 to shoot some videos. Unlike previous days, I didn't try to do both at the same time. So there are some missing photographs of the Blue Angels on Sunday as I switched to the S-110 during the large 'Delta' formation and 'High Alpha Pass' by the Solo pilots. 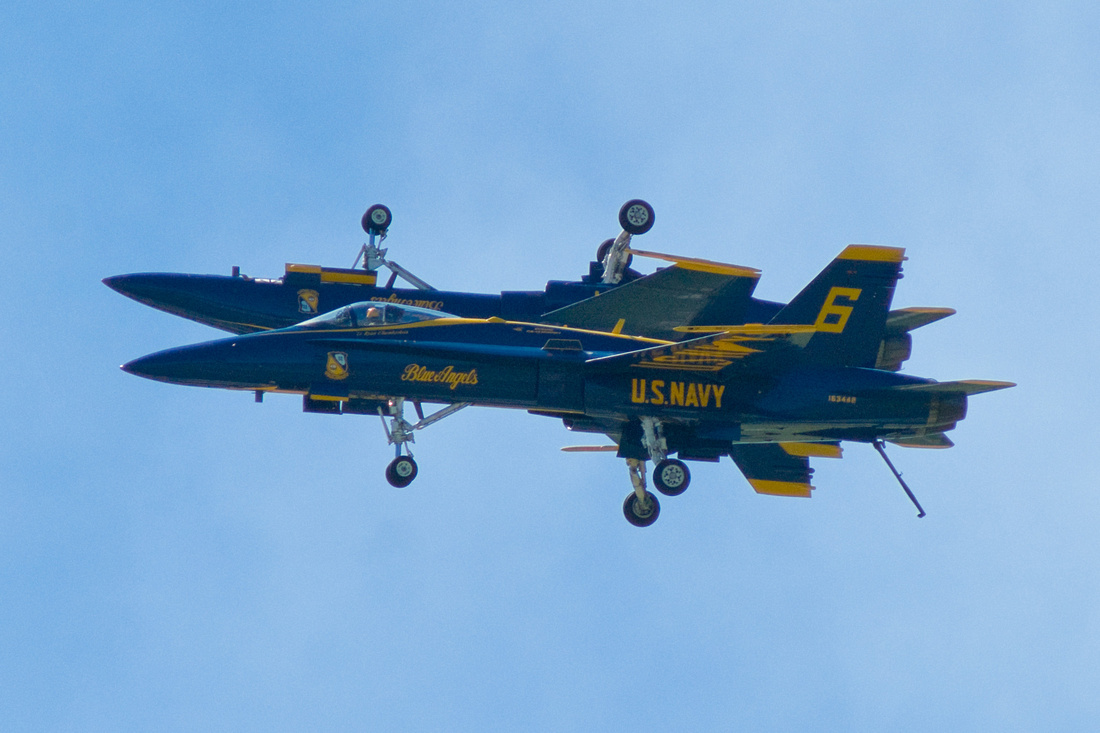 See the full Gallery or the Gallery slideshow for more photos from the air show. This is my Best Of set. For the full daily sets see: Thursday 7/23, Friday 7/24, Saturday 7/25, or Sunday 7/26 (the most complete day).

I shot short video clips of the aerial demonstrations. My Canon S-110 was attached to my Sony a200 as I shot still photos. The clips are jumpy and were quickly assembled so don't expect much. 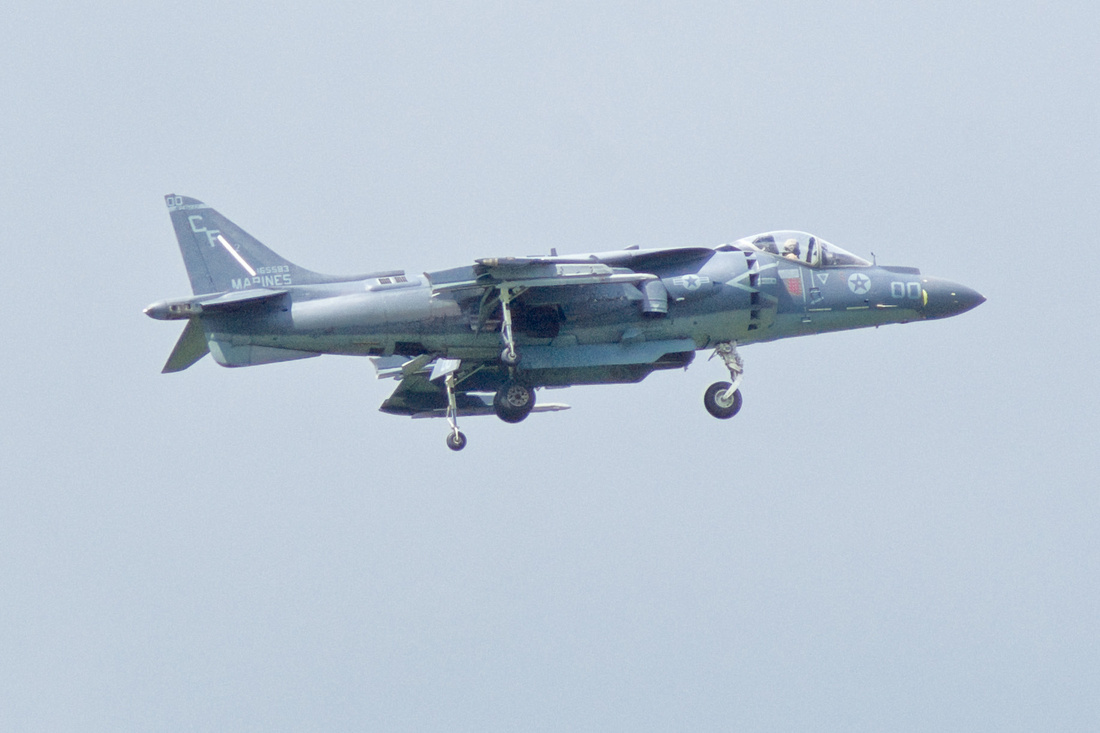