Another good airshow, lots of WW-II Warbirds, modern Military aircraft, aerobatic demonstrations and the USN Blue Angels. But in 2005, I was more interested in the social aspect than the photographic possibilites or even aviation. At least I didn’t blow it off like the 2003 Fargo AirSho. Instead of attending with my best friend and fellow airshow enthusiast, Bob Nelson, I attended with my aunt and her family.

Friday
The Blue Angels flew over our house Thursday and Friday during practice. They were working up their routines: getting closer and closer. The F/A–18C ‘Hornets’ would go around and around, flying over our house again and again.
I believe Bob photographed the Blue Angels practice session today. (Maybe Thursday) I can’t be sure except the location of his photos and his past history suggest so. A couple photos are clearly shot from the Airport Park west of the runaway. There are other photos that might have been photographed from the NDSU track & field stands.

Saturday
I told Bob I would meet him at the NDSU track & field stands at 1:00 pm to photograph the Blue Angels. “If I don’t show up it’s because I’m being pummeled by hammers.” My headache was terrible. I was down most of the day. I got up to watch the Blue Angels from my backyard. They flew over a couple times, but too fast.. I got lot of photos of trees and smoke.

Sunday
Normally I would not leave so early, but I wanted to get as much in before my headache returns. It also gave me more time to goof around with my cousins. We arrived as the gates opened and sat 50 feet south of the announcer’s platform, at the fence and half way between the loudspeakers. We watched the Happy Hooligan F–16A ‘Falcons’ take off, followed by a pair of F–15 ‘Eagles’. I toured the Fargo Air Museum with my cousins. The Radio Controlled model airplanes flew, but it was too windy for Skydive Fargo!. The Red Baron flying team flew during the Star Spangled Banner to open the show.

After lunch it was already too hot. There was a Heritage fly-by featuring a F–16C ‘Falcon’ and P–51D ‘Mustang’. The Pietsch Cub Comedy Act follow. My cousins and I toured the static displays, stopping first at the soaking tent, then the C–5A ‘Galaxy’ and F–15 ‘Eagle’. All day long the PA announcer asked the owner of a Chevy Blazer to move it. I knew from past air shows this a comedy routine. Not long afterwards a US Army UH–1 ‘Blackhawk’ helicopter flew by with the Blazer in a sling underneath. As it got to the center of the runaway, it let go. A pyro display exploded as the Chevy bounced off the ground.

Pietsch landed his 1946 Taylorcraft on a moving motor home. “And you think an aircraft carrier is difficult.”
Another tour of the grounds, stopping at the C–47 “Duggy”. I thought I saw Bob Nelson. He was surrounded by women. “Nope, that’s not Bob!”
I photographed some the sights of the airshow and walked through the misting showers for the third time. I had the EMT guy hold my camera, “The water really cools you off.” I got good and wet.

I was back in time to see the Blue Angels’ C–130 take off under RATO power. “Fat Albert” made a couple passes before landing. The Blue Angels followed. I didn’t take many photos. I wanted to enjoyed the F/A–18C ‘Hornets’ zip around the sky and not watch it through the viewfinder. Bob made up for it by shooting with his motor drive!

Video
I tried to record a movie of the fly-bys, but there was something wrong with my Canon G–1. I switched the camera to continuous mode. In 2019 I assembled the continuous photos into a movie with a 2018 Blue Angel soundtrack. It turned out okay, but not worth posting online.

MIA
My sister and family didn’t make it to the airport but watched the show from the NDSU Track & Field stands at NDSU. Bob Nelson photographed the Blue Angels show and their practice from various locations. His digital photos confirm he was on site Saturday morning. He told me, “I shot from the NDSU Track & Field stands yesterday.” (Saturday afternoon). Today, Bob found another area to shot from: the Airport Park, or airport parking lot?

Fargo AirSho co-chairman Darroll Schroeder estimated attendance this weekend between 25,000 and 30,000. It fell off on Sunday due to the 90+ degree temperatures. 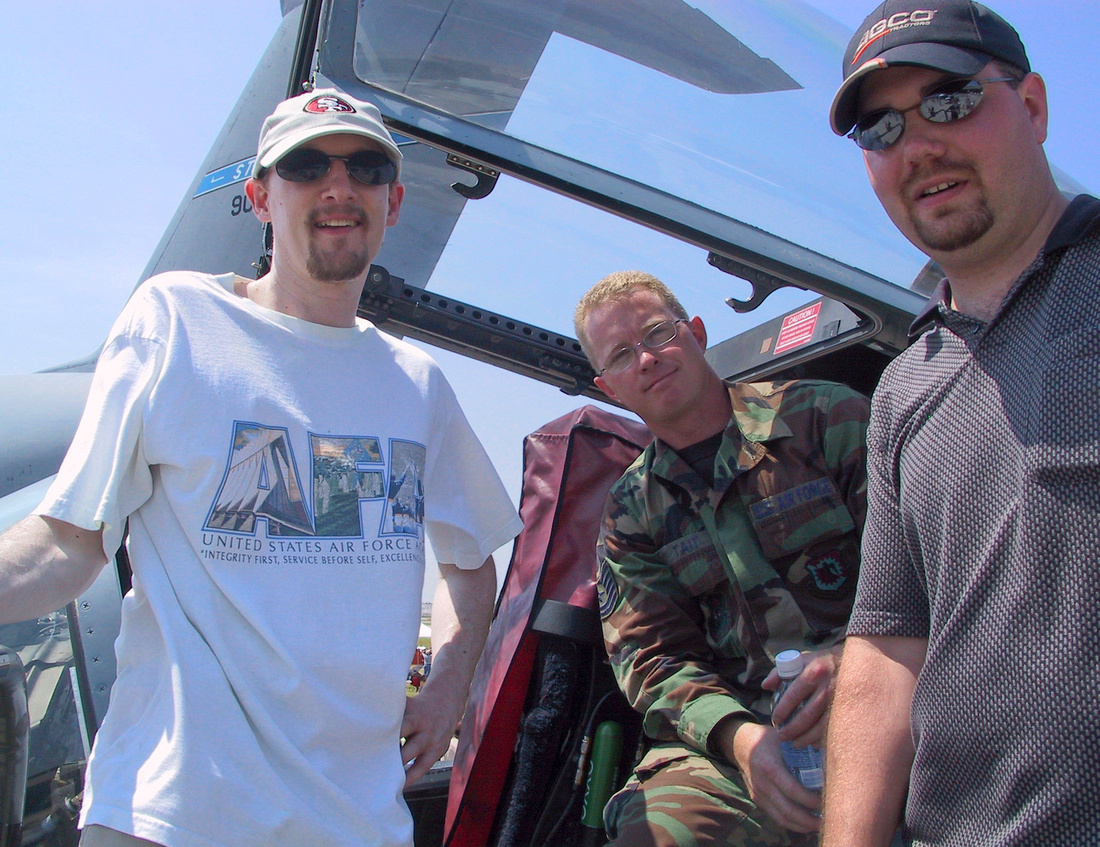 Hanging Out At The Eagle's NestCraig Maas and his cousin Nathan Orr with Tsgt. Tait in the cockpit of the F-15A 'Eagle' Oregon ANG 173rd Fighter Wing at Kingsley Field Air National Guard Base, Klamath Falls, Oregon. af78-488. Photo by Cody Orr on Sunday, July 10, 2005 at the Fargo AirSho.

Each aircraft link goes to its first photo in the gallery. The numbered links go to addition aircraft information, usually Wikipedia.
The 2005 Fargo Airsho was covered extensively by The Forum newspaper with over 25 articles about the performers and aircraft. 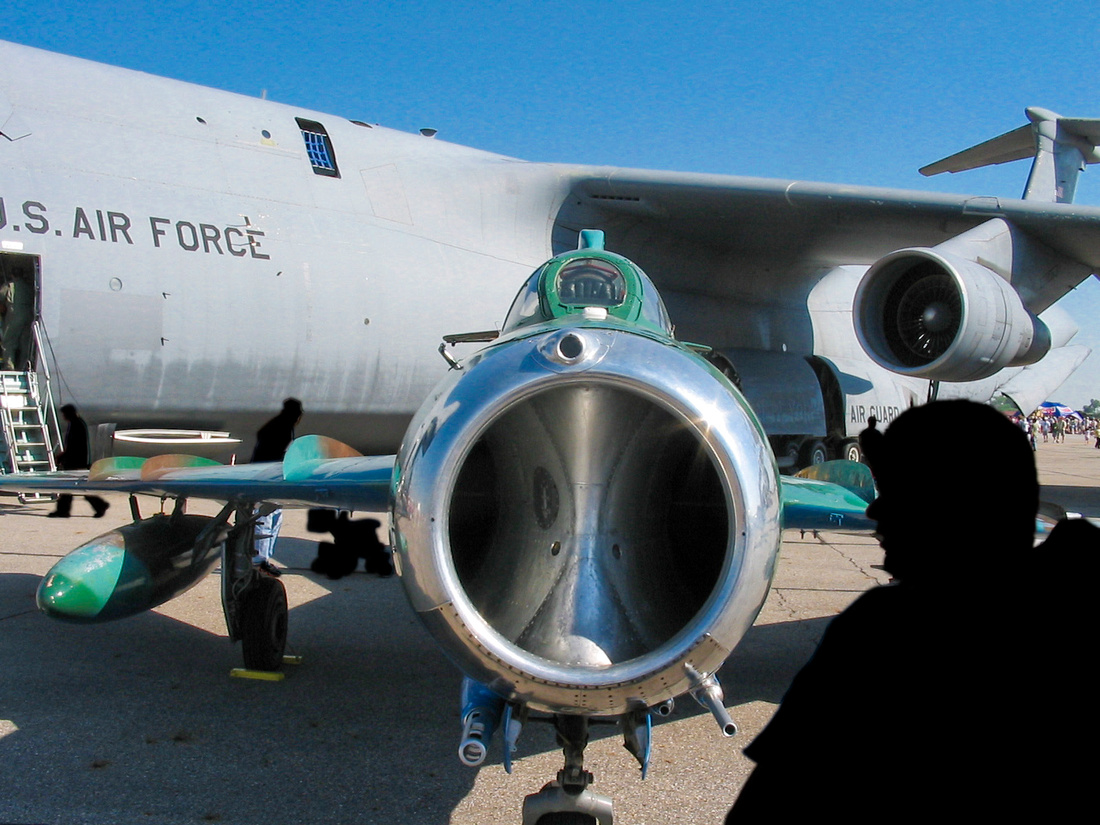 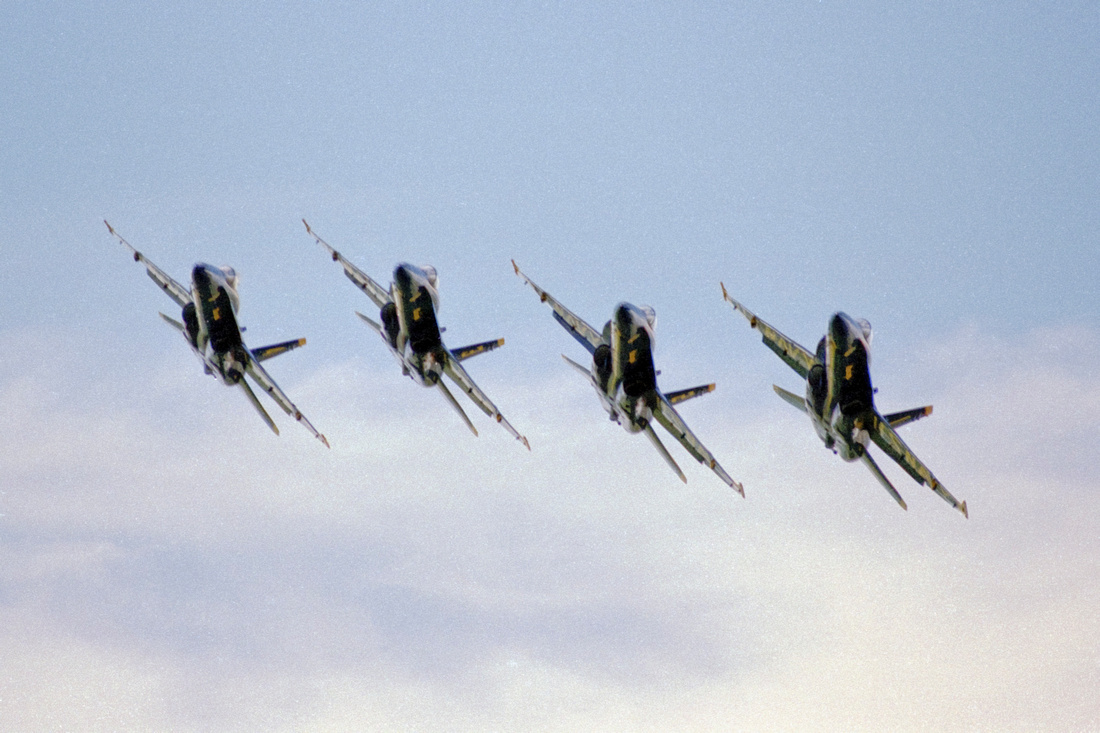 The namesake of the North Dakota Air National Guard, was Duane “Pappy” Larson. The name: Happy Hooligans came from the “Steve Canyon” comic strip. There was a character named Happy Easter, leading a band called the Hooligans. In 1957, his squadron members said when Larson looked like Happy when he put on a helmet and goggles.. and the “Happy Hooligans” label was born.

Duane Larson died at his Fargo home Wednesday morning (9/21/2005) after a bout with cancer. He was 88.
Larson, born in Regent ND, was a flying legend. Duane was a World War II fighter pilot, and flew 68 missions in a P–51 Mustang over Europe with the 8th Air Force. After the war He ran the Mott airport before joining the NDANG in 1951. He attained the rank of Brigadier General as he led the 178th Fighter Interceptor Squadron. Larson retired in 1969 to run a cropdusting business with his brother, Paul. source