Background
The Collings Foundation’s Flying Fortress was built at Long Beach, CA by the Douglas Aircraft Company and accepted on April 7, 1945. Although she was too late for combat, #44-83575 did serve as part of the Air/Sea 1st Rescue Squadron and later in the Military Air Transport Service.

In April 1952, #44-83575 was instrumented and subjected to the effects of three different nuclear explosions. After a thirteen-year “cool down” period, #44-83575 was sold as part of an 800-ton scrap pile and Aircraft Specialties Company began the restoration of the aircraft.

Damaged skin was fabricated and replaced on site; engines and props were stripped, cleaned, repaired, and tested; four thousand feet of new control cable was installed; all electrical wiring and instrumentation was replaced. For twenty years, without a major problem or incident, #44-83575 served as a fire bomber dropping water and borate on forest fires. She was sold in January 1986 to the Collings Foundation and restored back to her original wartime configuration by Tom Reilly of Vintage Aircraft.

The Collings Foundation B-17 was named “Nine-O-Nine” in honor of a 91st Bomb Group, 323rd Squadron plane of the same name which completed 140 missions without an abort or loss of a crewman.

The original “Nine-O-Nine” was assigned to combat on February 25, 1944. By April 1945, she had made eighteen trips to Berlin, dropped 562,000 pounds of bombs, and flown 1,129 hours. She had twenty-one engine changes, four wing panel changes, fifteen main gas tank changes, and 18 Tokyo tank changes (long-range fuel tanks). She also suffered from considerable flak damage. 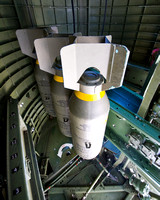 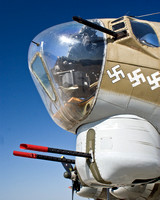 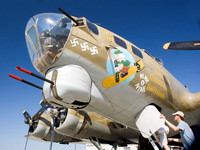