Monday 6/22
The Fargo Air Museum hosts two Commemorative Air Force (CAF) World War II bombers this week, from Mesa, AZ. My friend Bob Nelson and I waited south of the runaway for them to land Monday morning. I attached my Canon S110 to the bottom of my Sony a200 so I could shoot movies while photographing their arrival. First up is a B-25J 'Mitchell' known as "Maid In The Shade". It makes a pass over the airport, then circles the city once more before landing. It was followed half an hour later by a B-17G 'Flying Fortress' known as "Sentimental Journey".

Wednesday 6/24
I arrive at The Fargo Air Museum at 10:30. I renew my membership and get a pass to tour inside the bombers. The CAF crew were servicing the engines on the B-17G. The cowlings were off the 1200 HP Wright Cyclone Model R-1820-97 engines. I enter the B-25J 'Mitchell' and photograph the cockpit, radio, and waist gunner compartments. I photograph around the B-25J 'Mitchell' taking in this medium WW-II bomber, including a 1940 Buick 'Eight' parked by in front of the starboard wing. Bob arrives. We chat with Richard Perry, a pilot/crewman on the B-25J. I had Bob take a photo of me with the B-25J nose art: "Maid In The Shade." I photographed Bob at the nose of the aircraft.
At the B-17G 'Flying Fortress', one of the crew was unloading supplies out of the tail-gunner door. I asked him to hold the door open while I took some photos of the tail gunner: Manny (mannequin), the elevator and rudder controls. Bob left, I went inside and toured the B-17G 'Flying Fortress', from the cockpit to the waist gunner compartments.
Before I left I looked at Gerry Beck's B-25 'Michell' which is parked inside the new museum wing.
I came back to Hector Field after lunch. Bob was already at the airport viewing park. I was just in time, the B-17G was taxiing to the runaway. We caught the takeoff but missed the landing when we decided to move to the north end of the runaway.

Thursday 6/25
I arrive at the Hector Airport viewing park in time to catch the B-25J taking off (3:36). The windsock was from the north so the aircraft would land from the south. Bob joins me later. We have the sun at our back, a nice broken cloud background, and the aircraft point down toward us when they land. The only negative: it's pretty hot outside, so we didn't stay long.
I call the Fargo Air Museum on Friday for the flying schedule. Bob and I plan for Saturday.

Saturday 6/27
8:40 I arrived at the Fargo Air Museum. "Are You John Doe?" No. I should have said Yes. The B-17G crew were waiting for their last passenger. I took photos, and movie clips as the B-17G was towed down the apron. The Loadmaster announced we could walk down to the B-17G if we wanted and hang out with the crew and passengers. The pilot gave an introduction to the flight. The passengers were loaded, the engines starting and the B-17G taxiing out.
Bob was at the airport viewing park when I arrived. The B-17G 'Flying Fortress' was a long time on the taxiway before it took off. Bob and I head to the north end of the runaway. Once the B-17G landed we went back to the Viewing Park. We repeated this for all three B-17G flights. The B-25J, didn't go up.
B-17G Links
B–17G “Sentimental Journey”, Photos of this aircraft, History of this WW-II bomber, Air & Space Magazine 360-degree look from the cockpit, and finally coverage of its crash. 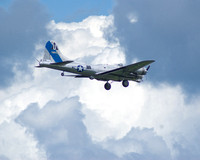 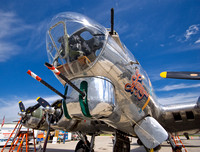