Created 15-Jun-17
Modified 15-Jun-20
Visitors 73
41 photos, 1 videos
Milwaukee Road No. 261
Under the Whyte notation for the classification of steam locomotives, 4-8-4 represents the wheel arrangement of four leading wheels on two axles, eight powered and coupled driving wheels on four axles and four trailing wheels on two axles. The type was first used by the Northern Pacific Railway and is consequently most commonly known as a Northern.
The Milwaukee Road 4-8-4's were known for their distinctive Mars light above the headlight. The 261 was no exception. When its second restoration was completed in 2013, it was put in its "as delivered" appearance. This meant that the Mars light was not included on 261. In 2016, the light was replaced.
The Friends of the 261 owns a water car, number 250002. The water car was once a tender used behind an L&N "Big Emma" 2-8-4, and later became a water car for the Southern and Norfolk Southern steam program. The water car was bought at an auction in 1995 when NS ended its steam program.
Milwaukee Road 261 is a 4-8-4 "Northern" type steam locomotive built by the American Locomotive Company, (ALCO), in Schenectady, New York in July 1944 for the Chicago, Milwaukee, St. Paul & Pacific Railroad. It was used for heavy mainline freight work until being retired by the railroad in 1954. Instead of being cut up for scrap, the 261 was preserved and donated to the National Railroad Museum in Green Bay, Wisconsin in 1958. Today the locomotive is owned, operated, and maintained by Minneapolis-based nonprofit organization Friends of the 261, which runs seasonal excursion trains using the 261. The steam engine, restored in 1993, has logged more than 25,000 miles under its own power since that time.
Built by the American Locomotive Company in July 1944, the 261 was originally operated by the Chicago, Milwaukee, St. Paul & Pacific Railroad, which was also known as the Milwaukee Road. The locomotive, weighing 460,000 pounds, is rated at a maximum of 4,500 hp and maximum speed of 100 mph, is coal fueled. It had a 3 chime whistle and airhorn mounted on it. It operated with the railroad until retiring in 1954.
In 1991, the newly formed "North Star Rail" selected 261 for restoration for mainline excursions. It was selected for a variety of reasons. The engine was large enough to handle the expected trains at track speed. It featured several modern features for a steam locomotive, including easier to maintain roller bearings. It also already had its asbestos lagging removed, which is very expensive to remove for environmental and safety reasons. Finally, 261's relatively short 10 year service life meant that the engine's boiler is more pristine, meaning it would take less work to rebuild the engine.
2002, With insurance being too high to charge reasonable ticket prices, the group decided to team up with Amtrak. Amtrak is self insured, so the added cost of excursion insurance was much less. However, Amtrak requires that all equipment meet Amtrak certification. The engine became the second steam engine to become Amtrak certified, and the Friends of the 261 began to buy or rebuild coaches that would meet Amtrak specifications. The first team up with Amtrak occurred in October 2003 with the engine's return to old Milwaukee Road tracks between Minneapolis to Winona, Minnesota.
The Friends of the 261 finally were able to purchase the locomotive in May, 2010 for $225,000 from the National Railroad Museum, keeping it in Minneapolis and returning it to operation upon its rebuild. On September 29, 2012, 261 was test fired and ran under its own power once again. In April 2013, it successfully operated a test train on the Twin Cities and Western Railroad. It ran normally from Minneapolis, and then operated tender-first back to Minneapolis.
Part of the success of the Friends of the 261 has been the purchase of numerous passenger cars for use on excursions.
All are painted in the Milwaukee Road's famed "Hiawatha" orange and maroon unless otherwise noted. Trains pulled by the 261 usually feature the distinctive Skytop Lounge Cedar Rapids, created by the noted industrial designer Brooks Stevens, and built by the Milwaukee Road shops for Hiawatha service in 1948. This car, completely upgraded in 2004, and an interior restoration in 2014, is equipped with 24 Rota-Cline seats, 12 seats in the Solarium, one drawing room/kitchenette. It is commonly paired with a 54-seat full length dome, Super Dome No. 53, built by Pullman-Standard for Milwaukee Road in 1952.
Most 261 excursions are assisted by modern diesel-electric locomotives, required by Amtrak. Those engines can help pull longer trains or provide motive power if 261 were to break down en route. The diesel also provides head end power for the passenger cars. In recent years, these have usually been GE P42 locomotives. Sometimes Amtrak Heritage Locomotives are requested, though such locomotives are not always available.
Profile shot of the 261's driving wheels. 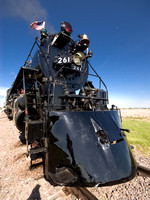 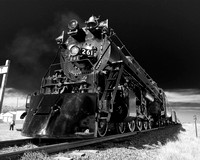 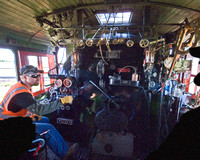