B-25J Mitchell
Named in honor of General Billy Mitchell, pioneer of American military aviation, the B-25 Mitchell was manufactured by North American Aviation and saw service in every theater of WWII.

Just when the B-25 bomber was considered the most modern aviation technology, Maj. Paul I. "Pappy" Gunn, an engineer in Australia, removed the bombardier-navigator from his greenhouse compartment in the nose of a B-25 and found he could install eight forward-firing .50-caliber machine guns in the aircraft. Thus was born the low-level B-25 strafer.

North American T-28 Trojan
Designed in 1948 to replace the T-6 Texan trainer, the T-28A was the first U.S. Air Force trainer with retractable tricycle landing gear. it was powered by an 800 hp Wright R-1300 radial engine and was used for advanced training and armament training. Deliveries began in 1950. and the Navy ordered the T-28D and T-28C for its training. They differed in having a more powerful Wright Cyclone. 1425 hp engine and the T-28C an arrest or hook for carrier landings.
North American modified many surpluses T-28's for ground attack and designated them T-28D. They had a Wright R-1820, 1,425 hp engine installed and 0.50 cal. gun pods under the wings. They could carry up to 1,200 lbs. of bombs, rockets or napalm. Many of these were sold to South Vietnam and armed their small air farce. They were used extensively in the early years; of the Vietnam War, prior to US involvement. American "advisors" were flying them against communist forces throughout the country and Laos. Regulations dictated that the pilot be Vietnamese, but in reality, the pilots were Americans and the Vietnamese "pilot" was someone who happened to be nearby. The T-28's were used to attack communist training areas and to patrol roads and railways, sometimes following the train to its destination. As the war escalated. the South Vietnamese used them more extensively in the ground attack role in support of US and South Vietnamese Army operations.

The Chance Vought F4U Corsair was a carrier-capable fighter aircraft that saw service primarily in World War II and the Korean War. From the first prototype delivery to the U.S. Navy in 1940, to final delivery in 1953 to the French, 12,571 F4U Corsairs were manufactured by Vought in 16 separate models, in the longest production run of any piston-engined fighter in U.S. history (1942–53).

P-51D Mustang
One of the most famous and effective fighter aircraft of World War II, the P-51 was originally designed to fulfill a British requirement submitted in April 1940. The North American Aircraft Corporation was contracted to design and build the new fighter. Early versions were powered by 1,100-hp Allison engines, but later models, starting in 1943, used the more powerful Packard-built Merlin V-1650. The Merlin-powered Mustangs were exactly what the Allied bombers in Europe desperately needed, and they became famous for their long range and potent high-altitude escort capability.

The most significant variant, the P-51D, featured a 360-degree-view bubble canopy, a modified rear fuselage, and six 12.77-mm machine guns. Along with the fighter role, Mustangs were used for ground attack and reconnaissance. After 1945, over 50 air forces around the world acquired and used the Mustang for many more years, some as recently as the early 1980s. 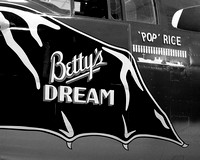 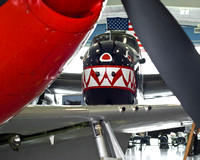 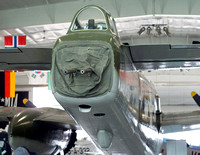 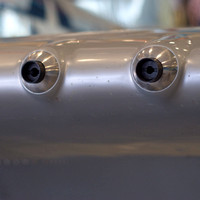