My friend, Bob Nelson, and I would photograph the entire 2007 Fargo AirSho including the practice sessions. My nephew, Sean was ten and wanted to hang out with us. Who could blame him, The USN Blue Angels would be flying and we would be chasing them. Bob was shooting a new Nikon D80 and was no longer limited to 3 rolls of film. He jumped to 2124 images for this airshow! A 20x increase.
This would be the last airshow where I would use film. I was frustrated by its limitations and I looked on jealously at Bob’s D80. This was the first airshow were I actively photographed the practice sessions too. However, with Bob taking thousands of photos, I specialized on what he wasn’t photographing: us.

Thursday
It rained on and off all day- sometimes pretty hard. The Blue Angels were flying over our house when my nephew Sean and I left. We stopped at Dey Appliance. Victor had some color print film for me.
We found Bob standing on the corner Phoenix International with his Nikon D80, a 300mm lens, and a black umbrella. There were about half a dozen cars and twenty odd people watching airshow practice.
I opened the door on the back of the van and used my Minolta XE–7 and 70–200mm lens. It was too dark and nothing turn out. A shame because the shock-wave of the F/A–18 ‘Hornets’ through the rain was stunning. Photos couldn’t do it justice.

Friday
Sean was with me again today. We attended kids day at Island Park, but once I saw a CF–18 flying around, I grew antsy. We left for NDSU. Sean tried to sneak up on Bob, but he was on the top of the stadium stands and could see us a long way off. It was warm and the sun was poking in and out of the clouds. The view was pretty good. I took some photos with my Fuji, until the Blue Angels went up. I forgot to set the camera back to the correct shutter speed so most of the photos were over-exposed and blurry.

Saturday
Sean and I met Bob at the Air Museum hanger door. We photographed the static displays before the show got too crowded. I photographed the airshow as an event. Bob covered the static displays and the flying demonstrations. I tried to see the Fargo AirSho through Sean’s eyes. He’s more interested in the food booths. The is over in record time. We were joined at the fence by 30–50 Japanese teenagers. I don’t speak Japanese but they would throw in an occasional English noun: “Blue Angel”, “Zoom”, and “Photoshop”. I understood their hand gestures and sounds. For much of an air show there are no words to describe it.

The Blue Angel show starts with Fat Albert. The C–130T didn’t use JATO rockets today. (It did on Sunday). I put the camera down and enjoyed the show. I didn’t take many photos: some on the ground, some of Bob at work, and a couple short movie clips.

The crowd thinned out after the Blue Angels landed. The static Military Aircraft displays were light this year. Sean and I stopped to investigate the Black Hawk helicopter. I pointed Sean to the Cessna L–19/O–1 ‘Birddog’ outside the Fargo Air Museum. “I took the controls of the Bird Dog in CAP camp when I was 13.”

Sunday
Bob called at 2:00 pm. He was near Phoenix International again.
I told him, “Call me when Fat Albert goes up.” I climbed my roof at 2:00 pm., the C–130T was in the distance. After a long wait I called Bob.
He told me, “The Blue Angels are on the runaway ready to go.”
The first F/A–18C ‘Hornet’ went zooming over our roof. I photographed a couple passes and watched the show. I was pointing out directions to mom, who was watching from the ground.

More than 70 committee members oversee the production and operation of the two-day Fargo AirSho - guided by a $400,000 budget that pays for everything from the gas for the planes to water for the spectators.. Co-chairman Dick Walstad uses a three-inch binder to manage all the logistics and material he needs to keep track of, and when he doesn’t have his Palm Pilot in hand, his cell phone is nearby. The biggest challenge that coordinators faced leading up to the event was the weather. After three days of rainfall, Schroeder said he was relieved the weather was finally cooperating.. crews were out early that morning to lay straw and pump out water near spectator seating areas.. (they) arrived at 6:30 a.m. Saturday for final preparations.. -InForum.com Craig With His BirddogI had Sean photograph me with this Cessna L-19/O-1 'Bird Dog', because I actually got to fly it for a couple minutes while at Civil Air Patrol (CAP) camp in 1974. Photo by Sean on Saturday, June 16, 2007. 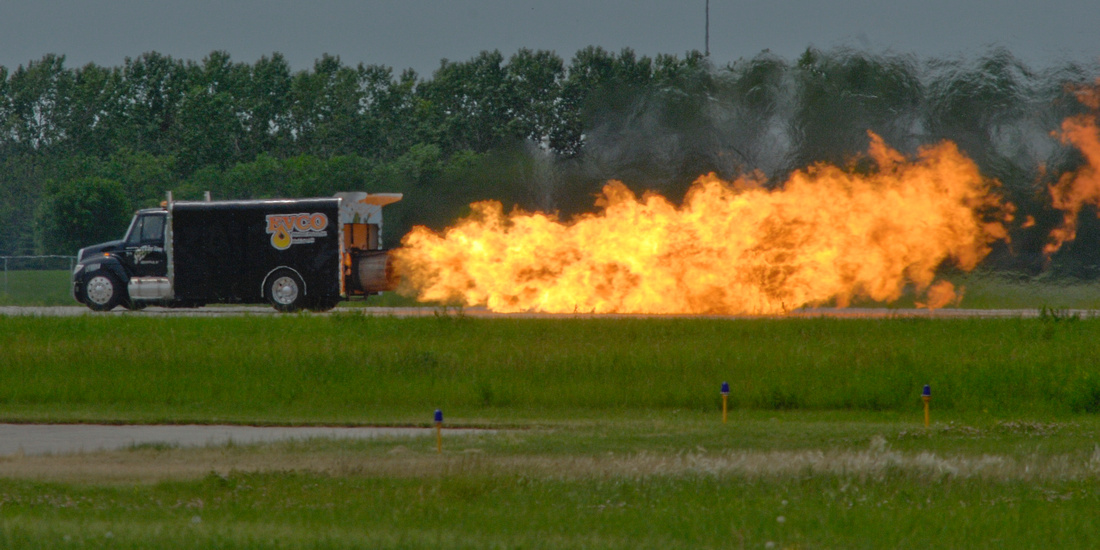 Replacement FourOn Saturday the Blue Angels pull airplane #4 out of the flightline. It needs some work at the hanger to the north. #7 is renumbered, and towed back in time for the show. Photo by Craig on Saturday, June 16, 2007 at the Fargo Air Museum.

This would be the last time I saw Gerry Beck flying his green winged P–51A ‘Mustang’. Gerry was killed on Friday, July 27th 2007 flying at Oshkosh, WI. He was killed when his P–51A hit the P–51D that Casey Odegaard was flying. Its propeller hit Casey’s tail, flipped up and over; landing upside down in a fireball. Casey Odegaard walked away from his heavily damaged ‘Mustang’. Casey was piloting his father’s aircraft. Beck hand-built his ‘Mustang’ from original specifications.

Robert Odegaard and Gerry Beck each own companies that restore and rebuild aircraft. They were each in the agricultural aviation business and bonded over restoring World War II military fighter planes. Beck owned Tri-State Aviation in Wahpeton. Odegaard Aviation is located in Kindred. Robert Odegaard said. “It’s been very difficult for me. We were hoping to grow old together.. (Gerry) and Casey got really close because they had done so much flying together. They became very good friends, so this has been tough for Casey.”

It’s a sad time for the aviation community. So much was going right for Beck and Odegaard. Their restored aircraft were taking to the air. Their vision for the Fargo Air Museum had come true.. both were founding members. Several aircraft in the museum are from Beck’s personal collection. “Many more have his touch and expertise applied to them,” said Fran Brummund, executive director of the Fargo Air Museum. -Inforum

Robert and Casey Odegaard along with their restored aircraft recently started in the movie: “Thunder Over Reno” 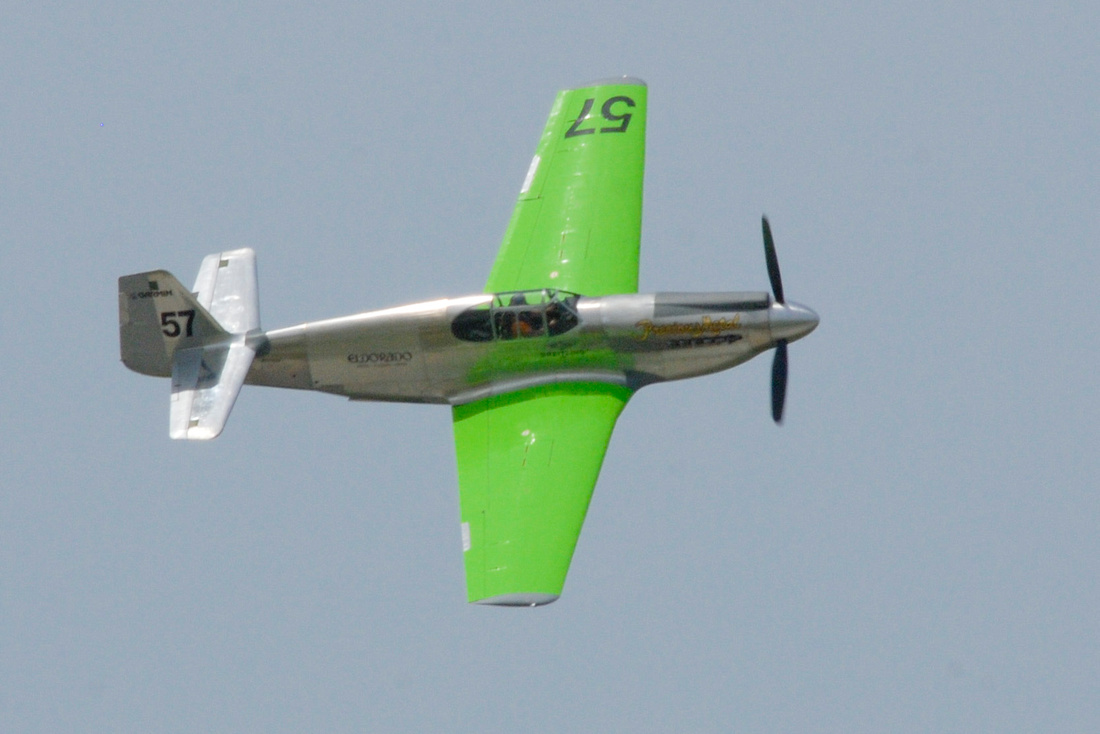 On Saturday, April 21st 2007, USN Lt. Commander Kevin J. Davis died during an airshow at Marine Corps Air Station, just outside of Beaufort, SC. The crash happened while the Blue Angels performed their final maneuver of the show. The pilots were about to reform their Delta Formation. It is surmised Davis pushed the stick too hard. The resulting 6.8 G-load caused him to lose vision or black out. Videos show David gave his ‘Hornet’ more angle of roll, and when he push the pitch, plane went into the ground. Eight other people were injured and some homes were damaged. Saddest of all, his parents were in the crowd watching.
Kevin ‘Kojak’ Davis was a decorated pilot who joined the Blue Angels in 2005.
The Blue Angels called back LCDR Craig Olson, to fly Opposing Solo for the remainder of the 2017 season. Olson served from 2003 to 2005, and flew both solo positions. Wikipedia, Military Times

Craig Maas
This was a transitional airshow. Bob switched to a Nikon D80 DSLR: from film to digital in late 2006. By June of 2008 I would switch to a Sony a200 DSLR. This is the last airshow that I used film: my Minolta XE-7 and Sigma 70-200mm lens. The resulting 35mm photos were not very good. It made the decision to switch to a DSLR pretty easy. (I had been shooting digital point-and-shoot cameras since 2000.)

Bob wasn't exactly hitting home-runs with his Nikon D80. For some reason he shot most of his photos 2 full stops underexposed. I have no idea what he was thinking. It had to be on purpose? Because he could see the results in the view finder, the histogram, and on the computer four days running. He also continued shooting the same shot over and over with no variation of composition or exposure. At least with film there was the excuse that film is fragile and usually one frame would have less issues. But with digital that is not the case. Bob also frames (composes) his images far different than me. Often this is a good thing, but when I don't have coverage, like this year, it means I'm looking at overly tight framing and wondering, 'why didn't you take a couple steps back.'

In past airshows we were on equal (limited) footing, so it was easy to justify using Bob's photos in my galleries and blog posts. (Two years before he died, I started this project with his blessing.) Because of his experience and especially the quality of his Nikkor lenses, his photos were much better than mine: especially the aerial demonstrations.
In 2008, and going forward, I no longer need Bob's photos. As I review his future airshow photos, I intend to post his best photos to Google Photos (Picasa, where I was posting his photos.. when he was alive.)
Bob tended to follow my lead. But he could also be a Luddite when it came to computers and especially the Internet. He loved surfing the web, and enjoyed collecting PDF spec-sheets on equipment that interested him. He also loved buying weird photographic equipment on eBay. But Bob had no social media presence. He had an email address: [email protected] that screams: 'I don't know what I'm doing.' The internet and photos go together like a hand in a glove, but Bob never put his hand in. He didn't mind when I posted his photos. He even took some delight in it.
Going forward from 2008, there are five more airshows to deal with before I catch up with the 2015 Fargo AirSho.
I will review Bob's post 2007 airshow photos, but I doubt I will use but a handful.
I debated posting his 2007 Fargo AirSho photos on this site, but Bob was covering everything, and I only covered the social aspect of the show. It made sense to continue posting his 2007 photos here even though this collection resembles his post 2008 output.