Visitors 18
Modified 15-Jun-20
Created 25-Jul-10
60 photos
Fran Brummund emailed from the Fargo Air Museum: they would be hosting another visit by a B-17G 'Flying Fortress' on July 18th. Bob Nelson and I got our camera gear ready and were waiting when "Yankee Lady" flew in that evening. We spent the evening photographing the 'G' in all her aluminum glory under a low golden sun.

More information from the The Yankee Air Museum website...
This B-17G-110-VE, N3193G, was delivered to the U. S. Army Air Corps as 44-85829, then transferred to the U. S. Coast Guard as PB-1G, BuNo 77255 in September 1946. It served at NAS Elizabeth City, North Carolina until May 1959. [after a number of owners] Globe Air Incorporated of Mesa, Arizona acquired it .. on February 18, 1981. It is now named "Yankee Lady" and flies for the Yankee Air Museum at Yspilanti, Michigan. The B-17F lacked adequate defense against a head-on attack. By September 1943, the Flying Fortress showed its final shape during firepower tests on the XB-40, a modified B-17F with the advantage of a "chin" turret. The success of the chin turret, led to the delivery of the B-17G (the major production version), which was the first production variant to have a chin turret installed, under the nose. The Bendix turret held two .50-cal. guns, which increased the armament to thirteen guns. In all, there were 8,680 B-17Gs built by Boeing, Vega, and Douglas to make this the largest production variation. The Boeing B-17, and the Consolidated B-24, were the United States' two standard heavy bombers until the introduction of the B-29 Superfortress. B-17s were flown by the United States Army Air Corps (USAAC), throughout the American participation in the Second World War. They were used by the US Eighth Air Force, based in the UK, to bombard German targets in Europe during daylight hours, a method which resulted initially in very heavy losses of aircraft and crew. As B-17 refinements progressed, along with better pilot training and tactics, it would become a formidable adversary in the Allied war against Germany.

About To Touch Down 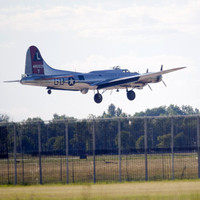 Pulling Up The Drive

Parked In The Sun 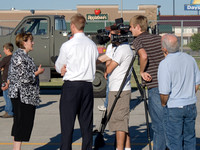