This has to be the nadir of airshows for me. I didn’t attend. I was in town and decided to celebrate the Fourth at my sister’s house instead. I don’t see any photos from Bob Nelson either. Maybe he was out-of-town. Either way, our interest in airshow had dropped but would recover in the coming years. I know at one time I was very chauvinistic about aircraft. I was only interested in military aircraft and if the Blue Angels or Thunderbirds weren’t flying it was hard to get my attention. It would be another six years before I saw the The Canadian Forces Snowbirds, a team I have since grown to appreciate. But at the time their 1961 CT–114 ‘Tutor’ aircraft didn’t interest me. 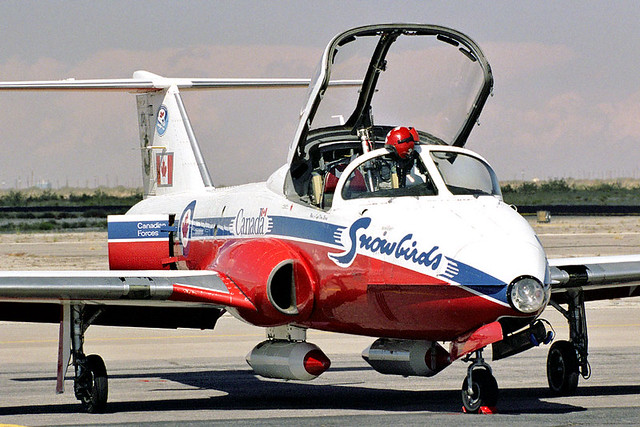 Although I didn’t attend this airshow, I found photos of the 2003 Snowbirds on Flickr. The photo of the Canadair CT–114 ‘Tutor’ (above) was shot by Ken Shanaberger at the Amigo Airsho 2003 (El Paso, TX).

The Fargo AirSho committee asked the DOD for appearances by B1, B2 and B–52 bombers; C–5 and C–17 jumbo transport planes. The USAF had their hands full in Iraq at the time.

The AirSho committee tried to book the USAF Thunderbirds after the Grand Forks Air Force Base canceled their Friends and Neighbors Day. It didn’t work out. But at that same convention, the Canadian Snowbirds offered to fly in and perform for a single day. The team’s leader, Major Stephen Will was friends with Jim “Fang” Maroney. Maroney was a NDANG fighter pilot and would be performing in this year’s show.

There were two problems with holding an airshow on the Fourth of July. Many resident would be out-of-town for the weekend. Second a one day show risks being rained out completely. “AirSho organizers have taken out an insurance policy, costing $1,400, that pays $50,000 should more than 2/10ths of an inch of rain fall between 8 and 11 a.m. Friday.” -The Forum

These quotes are from The Forum as well as some of the facts and figures above.