Created 23-Aug-13
Modified 15-Jun-20
Visitors 8
40 photos
The Commemorative Air Force (CAF) Airpower History Tour came to the Fargo Air Museum. I was most interested in seeing the B-24A Liberator. I don't recall ever seeing one. It the most produced heavy bomber in World War II. "The B-24 ended World War II as the most produced heavy bomber in history. At over 18,400 units, half by Ford Motor Company, it still holds the distinction as the most-produced American military aircraft." (Wikipedia)
Ever since reading "The Wild Blue" and "Log Of The Liberators" as a kid I've been interested in seeing one. The text below comes from signs set up around the bomber by the crew.

B-24A Liberator 'Diamond Lil'
Contracted to be built for France in 1940 and later redirected to Great Britain as AM927, this Liberator was the 25th (Serial Number 18) built out of a total of 18,482 B-24s. It was accepted by the British in May 1941. Two days later, this aircraft was handed over to Trans World Airlines (TWA) to conduct training of RAF pilots out of Albuquerque, NM. The following month, the right main brake locked up during landing and aircraft departed the runway. Due to the extent of the damage, the aircraft would not be returned to service as a bomber. An arrangement was made between the British Ministry and Consolidated Aircraft Company for the company to keep possession of AM927 for logistic support and further B-24 development.

AM927 was immediately utilized as the C-87 Liberator Express prototype and returned to service in July 1942. Throughout the war, the aircraft was used to haul personnel and equipment between the five B 24 production plants and numerous vendors. AM927 was also used extensively for flight test purposes, developing such things as improved flight control characteristics for the later model Liberator bombers.

Since 1968, Diamond Lil as a CAF Aircraft
In May 1968, the CAF purchased the aircraft from Pemex. In 1971, AM927 was painted in the colors of the 98th Bomb Group and given the name 'Diamond Lil'. During the next 20 years 'Diamond Lil' traveled extensively throughout the US- and made an Atlantic crossing to England in 1992. Over the years, many hours and much talent has been dedicated to restoring Diamond Lil to her configuration as a B-24A Bomber. Extra windows and interior items were removed. Bomb racks and equipment were installed. .50 Cal machine guns, the Tail Gun position, and the Greenhouse nose were completed. 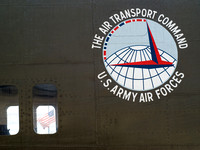