2019 is the 30th Anniversary of the official Fargo AirSho, and it has been 30 years since the USAF Thunderbirds last performed in Fargo. The lineup sounded very good, but $35 tickets meant I would only attend one day. The weather forecast suggested Sunday would be the best day. This was a mistake. The skies were clear on Saturday, and I could have attended with my cousins rather than going alone. I enjoyed Sunday’s show and although the skies were cloudy the weather was very pleasant.

Thursday
I checked the Arrival and Departure schedule on Flightaware.com - looking for holes when the USAF Thunderbirds might be practicing. For most of the day there was a hole between 3–4 pm. I made plans to be at the NDSU Rugby fields.
At 2 pm., I heard jets flying around. I pulled off the window screen and climb on the roof. The F–16 ‘Falcons’ are too far away and quiet. I made a quick run to NDSU. The Thunderbirds Diamond is spinning overhead as I head down 25th Street. I think they’re landing. I wait at the NDSU Track & Field venue, but that’s it for today. On Thunderbirds’ Facebook page (2:37 pm.), “We’re in North Dakota this weekend for the Fargo Airsho! Make sure to come on out to see the show. Tomorrow’s practice is at 2 p.m., and we fly at 3 p.m. Saturday and Sunday.”

Friday
I rolled in early at the NDSU Rugby Fields to catch the other teams practice: The Red Bull (acrobatic aircraft and skydive team), and Keith Pietsch’s Interstate ‘Cadet’.
It’s a long wait before I hear the F100-PW–229 engines spool up. From the fence line, in the distance I see movement. Two solo Thunderbirds taxi to the south end of the runaway. I saw Thunderbirds #1–4 start to move, but they never went anywhere. Thunderbird #5 went up, but then came down right away. Thunderbird #6, Major Michelle Curran put the Falcon through its paces. ‘Practice’ was over in 20 minutes. I don’t know if there were mechanical issue or scheduling issues today.

Saturday
Rather than return to the NDSU Rugby Fields today, I decided to spend the morning with my family. By the time I returned I realized today was a great day for the Fargo AirShow, but I was too tired to fight the crowds. Instead I climbed the roof at 3:18 pm. I watched the Thunderbird show: 25-feet in the air. Our house is on the flight path so the F–16C/D would often fly right overhead. I also had a good view of the larger loops and burst formations. The Thunderbirds seemed to be missing an aircraft. It looks like #4 was grounded.

Due to technical difficulties, the squadron’s start was delayed, emphasizing their commitment to safety for their pilots. The audience grew a bit restless, but once the Thunderbirds took off, the crowd was quickly dazzled by the group’s thrilling performance, which included diamond formations, high bomb bursts and trail formations. Spectators held their breath when it looked as if the F–16 planes were bound to crash, with their wings sometimes only a few meters apart.
Toward the end of their act, narrator Markzon spoke of current and fallen air veterans, with the Thunderbirds drawing a heart in the sky behind him. This year’s AirSho was the first since the death of Maj. Gen. Darrol Schroeder, who helped found the first AirSho and the Fargo Air Museum. Schroeder passed away at age 88 in March. -InForum.com

Sunday
The sky was clear this morning but clouds rolled in by noon. I was on the show apron before 11:00 am.; photographing the static displays; starting with a civilian Cessna 421B; then the Army helicopters. The University of North Dakota brought a nice collection of their aircraft including a Robinson R44 helicopter. The Mountain Home AFB brought a pair of McDonnell F–15E ‘Strike Eagles’. The Ohio ANG brought a Lockheed F–16C and a Boeing KC–135R tanker. The NDANG had a General Atomics MQ–9 UAV and an old McDonnell F–4D on display. The Minnesota ANG brought a Lockheed C–130H. The USAF brought a Bell-Boeing V–22. UPS had their Boeing 767–300F on display and Fed Ex had an aircraft too.

I was still setting up my lawn-chair at 11:20 am., when the USN Leap Frogs skydiving team performed with the US Flag to the National Anthem. I was ready by the time Mike Wiskus came out with his Lucas Oil Pitts S–1–1B biplane. I used a Sigma 400mm lens on my primary Sony a68 and a Sony 70–300mm on my a200 as backup. When “Miss Mitchell” the CAF’s WW-II medium bomber made two simulated bomb passes, I was ready with the Sony a200 to catch the pyrotechnics bursts on the field. “Miss Mitchell” was paired with a North American Aviation T–6 ‘Texan’.
Paul Lindemann flew an acrobatic demonstration with his green/black/white Pitts S–2B. Keith Pietsch followed with a comedy routine in his Interstate Cadet.
The Red Bull Parachute Team performed along-side Kirby Chambliss in his Zivko Edge 540. I can’t believe how small their parachutes are. The Edge 540 is a high performance acrobatic aircraft. Kirby performed an inverted ribbon cut right on the deck.. Crazy.
The 2nd Cavalry Regiment out of Bismarck flew their Sikorsky UH–60 helicopter to the river, filled the Bambi Bucket and did a water drop behind the Thunderbirds.
Jarrod Lindemann flew an acrobatic demonstration with his Boeing-Steerman PT–17 ‘Kaydet’ in a homage to the “Red Baron” Pizza flight demonstration squadron. Jeff Boerboon flew his siamese-twin Yak 55/110 with a GE Lear 24 Jet Engine mounted under the wing which gave him a lot of power in his climbing maneovers. The NDANG towed their MQ–9 ‘Reaper’ back to the hanger.

Before the USAF Thunderbirds went up, the skies started to clear, but then it clouded up again. I switched my Sony a68 to the 70–300mm zoom lens so I can frame the full formations maneovers. I used my Sigma 10–20mm Ultra-wide zoom on the Sony a200 to cover the Burst formations. Major Matt Kimmel (#5 Lead Solo) taxied while waving at the crowd. It appeared he took a quick pit-stop at the USAF Thunderbird service station. Kimmel rejoined his teammates minutes later and the show started.
I enjoyed the Thunderbird demonstration. The F–16 ‘Falcon’ is my favorite aircraft, but the white paint scheme against a white sky doesn’t photograph very well. The sky quickly filled with smoke. I thought the wind would take care of it. I was in no hurry to leave after the Thunderbirds landed. I photographed the Thunderbird pilots with their fans.

On the way out, I grabbed some last minute photos of the Ohio ANG KC–135R and F–16C. Major Waldo, was at his aircraft. “Major, You were here last year?”
“Yep.”
“Would you pose with your ‘Viper’?”
“Sure.”
The pilots from Mountain Home AFB were giving out cookies from the steps of their F–15E ‘Strike Eagle’.
I joke with the Lieutenant, “Is the Air Force bribing recruits with cookies now?”

My last stop is Duggy (the Douglas C–47 ‘Skytrain’) parked outside the Fargo Air Museum. The paint is peeling off his elevators: from age or use, I don’t know.

The crowd (which was never that large, maybe 10,000?) had thinned down quite a bit. For crowd comfort the weather today was almost perfect: not warm, not cold, cool with a light breeze out of the north. The broken clouds keep the sun at bay. However, the clouds made for sub-par photographs. The skies finally cleared.. after the airshow was over. 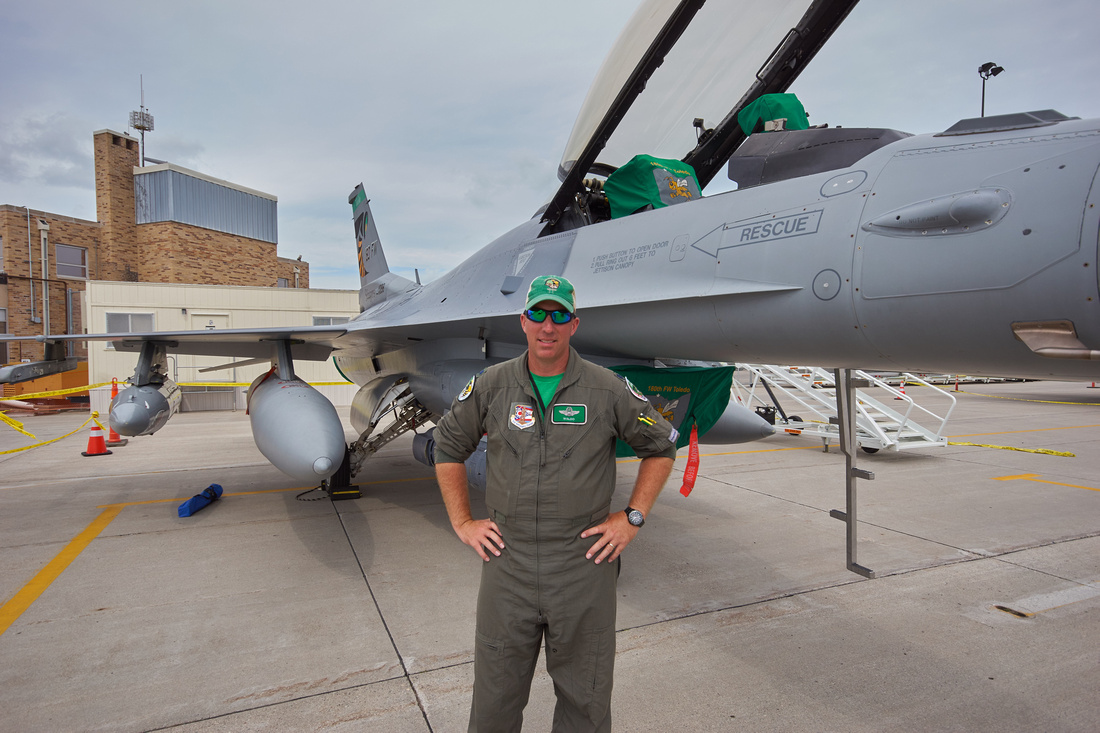 Waldo With His FalconMajor Waldo flies the from the Toledo ANG 180 FW "Stingers", 112th Fighter Sqd. Photo by Craig on Sunday, July 21, 2019 at the Fargo AirSho.

See the Best Of, Gallery or the Gallery Slideshow for more photos from the Fargo Airsho: 146 in total with detailed photo/airplane descriptions. My photos are ©2019. Additional photos can be found here. 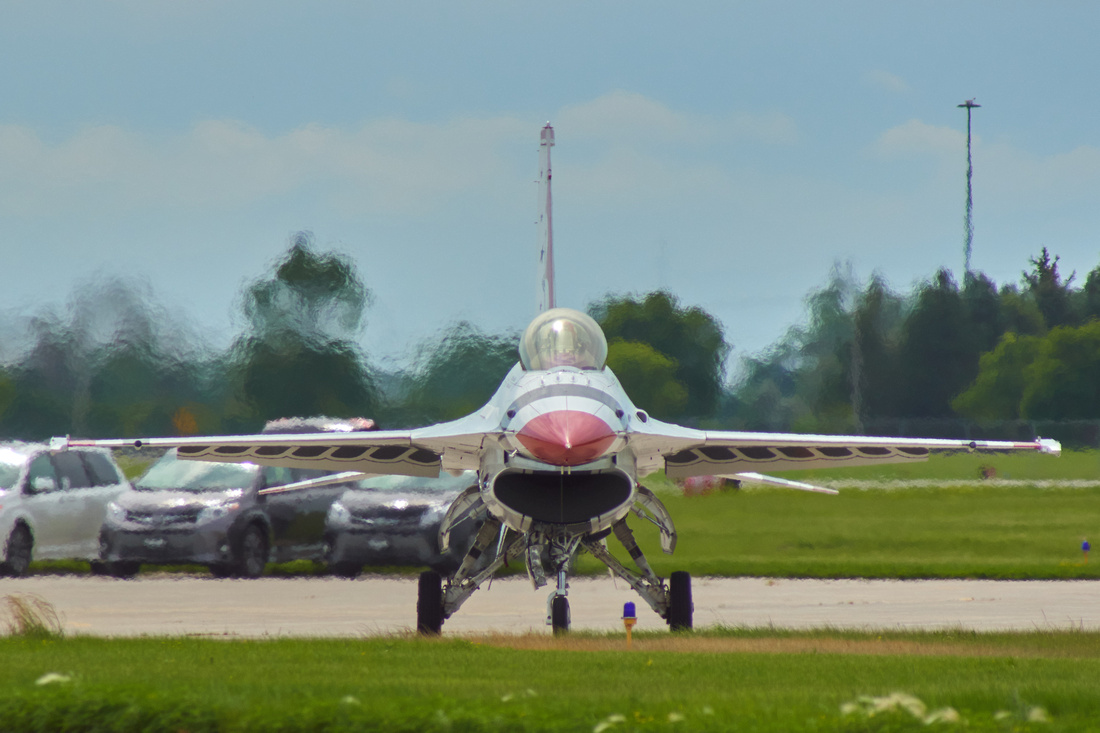 Curran's FalconUSAF Thunderbird Major Michelle Curran (#6 Opposing Solo) taxis her F-16C 'Falcon' back to the flight-line at the conclusion of the 2019 Fargo AirSho.< Photo by Craig on Sunday, July 21, 2019 at the Fargo AirSho.

This list comes from the Thunderbirds’ 2019 Program. The Crew Chiefs must move around as Tsgt Tyler Cox and Ssgt Dylan Gagne were listed on the side of the #5 aircraft. Maneuvers, Officers and Enlisted Personel