This is would be the fifth official Fargo Airsho. The committee used everything they learned to put together the best airshow they could. Unfortunately the weather was bad on Sunday, but Saturday’s show was excellent.

The 2002 edition of the show is the most varied of any show held here. It features a combination of aerobatic demonstrations, hang gliding, parachuting, jet-engine dragster; high-performance military aircraft flying solo and in tight formations and numerous civilian and military aircraft on static display. The U.S. Navy’s Blue Angels, last here for Fargo AirSho 1997, are the featured attraction. -Gerry Gilmour, The Forum

Thursday
The Blue Angels practiced over our house. We’re on the flight path. I listened to them practice. If they flew right over the house it was a quick whooshing sound. If they were a block or two off, it was a much louder roar. If they were climbing or turning with afterburners it was even louder: a crackling rumble like thunder.

Friday
A pair of F–117A Stealth fighters were flying around Fargo when my friend Bob Nelson and I met for lunch. We plan to attend the show on Saturday. Bob was planning on shooting with a slow shutter speed. This sounded weird to me, “You mean blurry?”
I told him I’d pick him up at 11:00.
“That gives me more sack time.”
“We might pick you up earlier. Say 6:00 AM. Just be ready,” I laugh.
I photographed the Blue Angels as they practiced over the house this afternoon, ‘I think they clipped our trees a couple times.’

Saturday
I brought along my sister, nephews, and my friend Bob Nelson. We were still waiting in line when Skydive Fargo! broke the old North Dakota record as 16 jumped out of Robert Odegaard’s DC–3. We missed the “Happy Hooligan” F–16 fly-b. All the good spots on the flight-line were taken. The sky cleared and it warmed up into the 70s. The sun was hot. I photographed the Marine AV–8A ‘Harrier II’ as it hovered over the flight line. I love that it’s from the “Black Sheep Squadron” (The famous ‘Pappy’ Boyington squadron of WW-II, and Robert Conrad’s TV series)

During a break I left to photograph the airplanes on display. There were almost 30,000 people at the air show, so getting decent photos of the aircraft was impossible.

We were too far back to see Scott Hammack’s jet powered dragster: “Smoke-N-Thunder”. The WW-II Warbirds took to the sky. Pyro was detonated to simulate bombing runs. The fire, smoke and explosions scared my nephews. Fire engines extinguished the pyro display.

‘Fat Albert’ takes off at a 45 degree angle with RATO assisted thrust. We couldn’t see the Blue Angels until they were in the air. I shot a full roll of film as they flew around the sky. Bob had a better angle through the crowd. Bob and I pointed out the Diamond formations and solo pilots as they appeared on the horizon. I had less luck timing crossovers and reflections. I tried to frame the Blue Angel ‘Hornets’ with ground displays. I managed some flags.
The family left right away, which is a mistake. Go early, go solo, or go with Bob.

Sunday
My aunt and uncle attended today’s airshow. Bob was going. My energy level was so close to zero, I decided against. It was announced the air show wouldn’t start until 1:00 pm due to this morning’s storm. Bob was planning to shoot the Blue Angels from the Ellig Sports Complex at NDSU. He likes the view from the top of the stands. 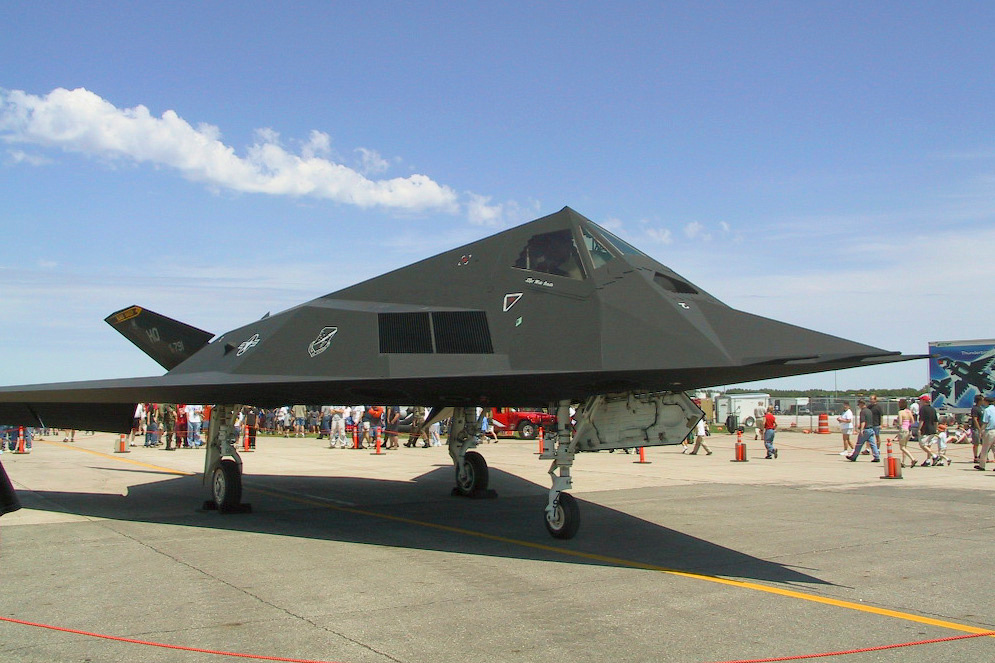 Each aircraft link goes to its first photo in the gallery. The numbered links go to addition aircraft information, usually Wikipedia. I also used the extensive coverage from The Forum newspaper and the NDANG Jet Letter newspaper. 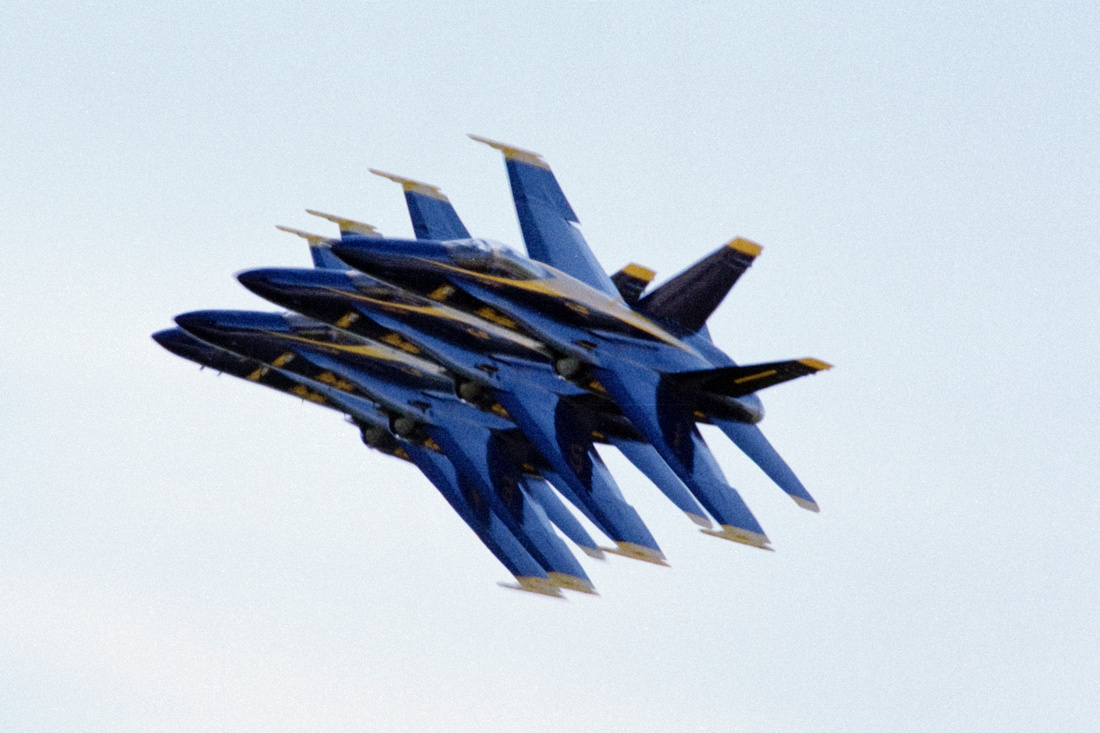 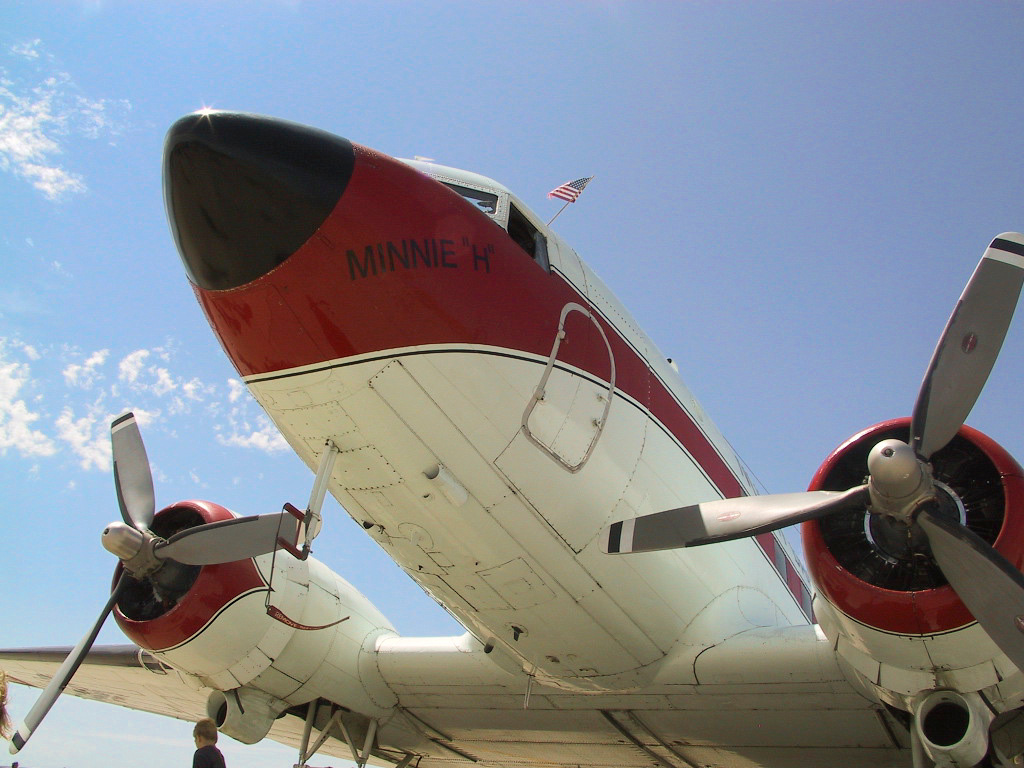 The original “Minnie H” was a side-wheel steamboat that carried passengers and mail on Devils Lake from July 4, 1883, to the fall of 1909. The name was transferred to a C–47 which flew for the North Dakota Air National Guard for another twenty years. Officially stock number VC–47A–25DK; serial number 4293800, this C–47 was build in 1943 by Douglas Aircraft (Oklahoma). It was accepted by the US Army Air Corps in January 1944. She served in the China-Burma-India Theatre (WW-II) flying The Hump: the famous aerial supply route from India to China through the Himalayas. She also served in Europe before being assigned to the NDANG on July 7, 1947. It’s estimates the guard flew ‘Minnie H’ 12,000 hours (22,000 hours total) before she was retired. She served four N.D. governors as the state’s official flagship: Fred G. Aandahl, Norman Brunsdale, John Davis and William Guy. But her finest hours were spent helping those in need.

Probably best remembered by many will be the mercy flights the ‘Minnie H’ flew, transporting polio patients, rushing rare blood or needed serum to hospital patients or transporting key pieces of heavy bulky equipment to help in battles against natural disasters. -The Forum, 7/31/1972

Four of the most dramatic mercy errands were:

In 1988 “Minnie H” was moved for a final time from Bismarck to her new home in West Fargo. On July 14 a CH–54 ‘Skycrane’ helicopter from Meridian (Mississippi Air National Guard), made the delivery. The engine and wings made the trip by Army Guard flatbed truck. N.D. Adjutant General, Major General MacDonald, a former pilot of this C–47 was on hand to watch.
As of 2019 “Minnie H” is still at Bonanzaville, on display in the Eagles Air Museum. She is showcased as “The Governor’s Plane.”

An older C–47 (built in September 1942) served in the Pacific Wing of the Air Transport Command (Australia) during WW-II. She was sold as war surplus. She spent almost 50 years working for the Canadian Department of Transportation (CF-DOT.)
Harry Thompson and Robert Odegaard purchased the aircraft and restored it to the original colors of a NDANG C–47: “Minnie H”, in 1998.

In 2004, it was reconditioned, painted a bright yellow, and given a smiley face by SkyHarbour in Canada. Named “Duggy”, for its character on the kid’s cartoon “Duggy And His Flying Friends”. (Duggy is a project created from Mitch Carley’s cartoon characters.)

But today this C–47 pays tribute to “Minnie H” as she takes on the Fighting Sioux. “..the UND football team, was part of the airplane pull. The football team actually pulled a C–47 aircraft in a test of strength against other muscular types.”