Created 22-Sep-11
Modified 15-Jun-20
Visitors 99
298 photos
2011 Fargo Airsho
Sunday August 14th
Sean and I arrived at 9 AM. Nathan and family were already here; right where I predicted: on the south end of the flight line, just back from the fence. We dropped off our chairs; said hello to my aunt, uncle, cousins, and kids. At 9:30 I led Sean, Nathan and Cody into the static displays. Sean wanted a photo holding an Army assault rifle. I had a long chat with the F/A-18E Super Hornet pilot. David joined us at "Miss Mitchell". Crowds were building so I didn't spend any time at the twin F-15E Strike Eagles, instead Nathan and I checked out the live Navy band. We got back to our seats in time for the 11:14 parachute jump. Today's show was similar to yesterday's. Instead of a B-52 fly-by they had a KC-135 tanker fly over. Bob Nelson joined our party around 1 PM. I was working light today with my 18-70mm and 70-300mm Sony zooms. I managed to cram everything I needed into my fanny pack. It was hot today but still nice. I had a great time with my family. A CJ-5 landed without its gear down delaying the F-16 and Blue Angels by an hour. The P-51s, B-25, and 'Fang' flew to fill the gap. The delay meant we had to leave right away as the displays were torn down.
Note: some descriptions and text are from wikipedia.com, the FargoAirsho.com, and other websites regarding the performers and military aircraft.
Categories & Keywords
Category:Transportation
Subcategory:Airplanes
Subcategory Detail:Military
Keywords:
© Craig Maas 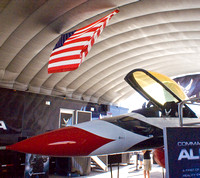 Don't Wear A Jumpsuit With A Beer Belly