Friends And Neighbors Day, at the Grand Forks AFB

Bob Nelson called me on Thursday, "There's an air show in Grand Forks on Saturday." Friday I stopped at The Image Place for ten rolls of Kodachrome and rented a 500mm CAT lens. They only had a Nikon mount but Bob said I could borrow his Nikkormat and monopod. I had no need for other amusements as we talked about aviation and photography the whole way. We even sang "Old McDonald had a MIRV, EIEIO." Bob followed the crowd on Highway 2. At the base entrance a guard saluted everyone coming in. Bob asks the airman, "Is that your German Shepherd?" pointing at a large jack rabbit? The guy laughs and says, "Yah, they're specially trained."

We were too late to catch the F-16 'Falcons' flying around. This would be our first airshow at the Grand Forks Air Force Base, and our first chance to see the B-1B 'Lancer' supersonic bomber.  As we near the flight line, I notice the B-1B, that's cool. Bob says, "Is that what I think it is?" I assume he meant the 'Lancer' but he was looking behind it to the C-5A 'Galaxy'. Bob was really excited to see the largest flying U.S. aircraft, but it didn't do anything for me. The GFAFB also is home to a squadron of KC-135R tankers. Based on the Boeing 707- the 'R's have new engines. To demonstrate, one of their KC-135R took off and almost went into a vertical climb. The new Turbofan engines have almost twice the thrust. This was follow by a B-1B 'Lancer'. Both planes did a series of passes with the B-1 making a bomb pass on the last run. They simulated the bomb blasts with pyro behind the Blue Angels. Bob and I were too surprised to photograph it.

The Blue Angels were now flying the F/A-18A 'Hornet'. Another first for us. Commander Gil Rud from Portland, ND was still leading the 'Blues'. He got a rare third year because of the transition from the A-4K Skyhawk. The Blue Angels flew a similar routine as two years ago including the sneak fly by. The only difference was with the F-18A they could pull some snappy turns. I thought the planes were smoky. I had smoke, dust, sun and sunscreen in my eyes.

I didn't spend much film on the static displays. I was more interested in aircraft I hadn't seen yet, so I have quite a few photos of the B-1B. It was guarded and roped off with a sign that said, Use of deadly force authorized." The good news is it kept other guests out of my photos. Bob and I, along with a group of photographers moved a ladder to the front of the F-16C 'Fighting Falcon' to get some nice top nose shots. I didn't notice at the time but this was the first 'C' version of the F-16 that I had seen. It was from the 314th Tactical Fighter Training Squadron, activated in 1986, and was only the second F-16C squadron in the Air Force.

"It's 5:00. 'Friends And Neighbor's Day' is over, everyone out!" was announced in a curt voice. On the way back to the car, a fire truck rounds the corner with a manned water gun. Bob raised his arms in a mock surrender, they honk their horn in reply. Bob told me about a premonition he had regarding a crash at the airshow thankfully he was wrong. The premonition was correct, it was the wrong airshow.

If I was underprepared for the 1987 airshow I was was over-prepared for this show. Ten rolls of slide film was over kill. I would have been better off with three rolls of print film, especially as I underexposed two rolls, which required a crazy amount of time with my Minolta F2900 film scanner and Adobe Photoshop. I worked hard to get some decent images from these underexposed slides. I scanned them three times! In 2003, 2010 (ScanCafe.com), and 2015. Four rolls of color photos are mine (1988.06.25.xx, 1988.06.25axx, 1988.06.25bxx, 1988.06.25cxx). Bob has shared three rolls of Black and White film (1086.xx,1086.xx, 1088.xx). Occasionally you'll see some people as silhouettes- I find people milling around the aircraft to be distracting so I mask them out in Adobe Photoshop. 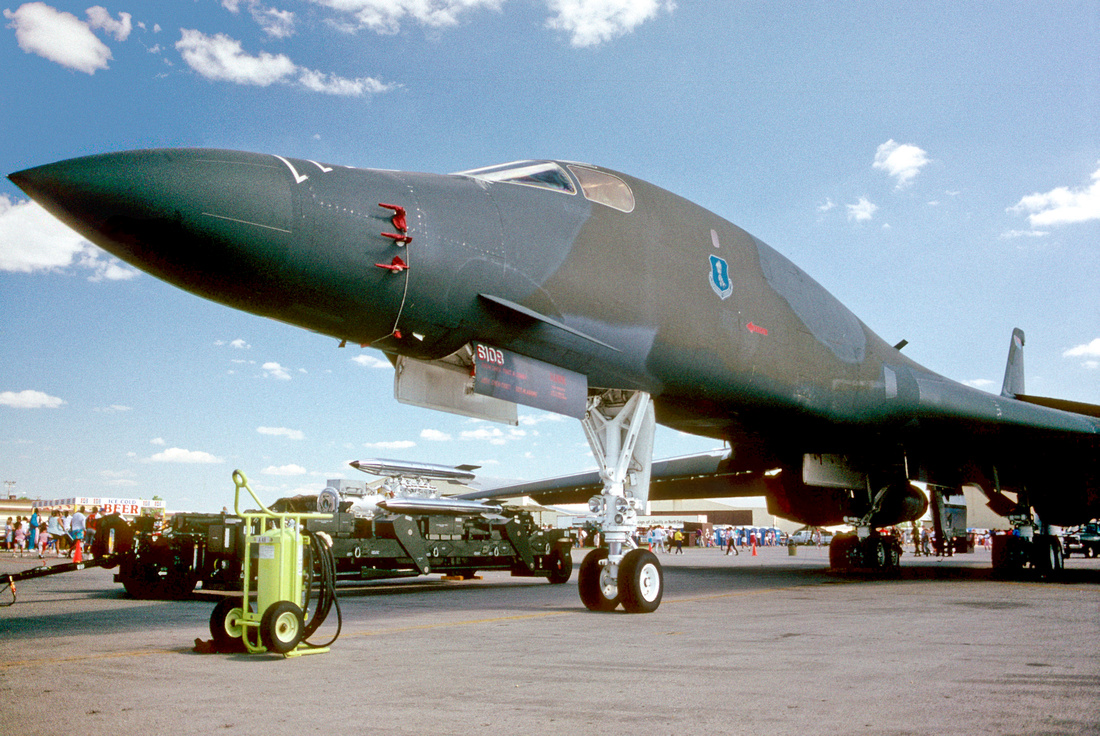 See the full Gallery or the Gallery slideshow for more photos from the air show: 105 total including my detailed photo/airplane descriptions. All the Black & White photos are © Bob Nelson.

I have scanned and made available additional Historic Information from the Fargo Forum, and a history of the Blue Angels that I think was in the 1988 GFAFB Program. 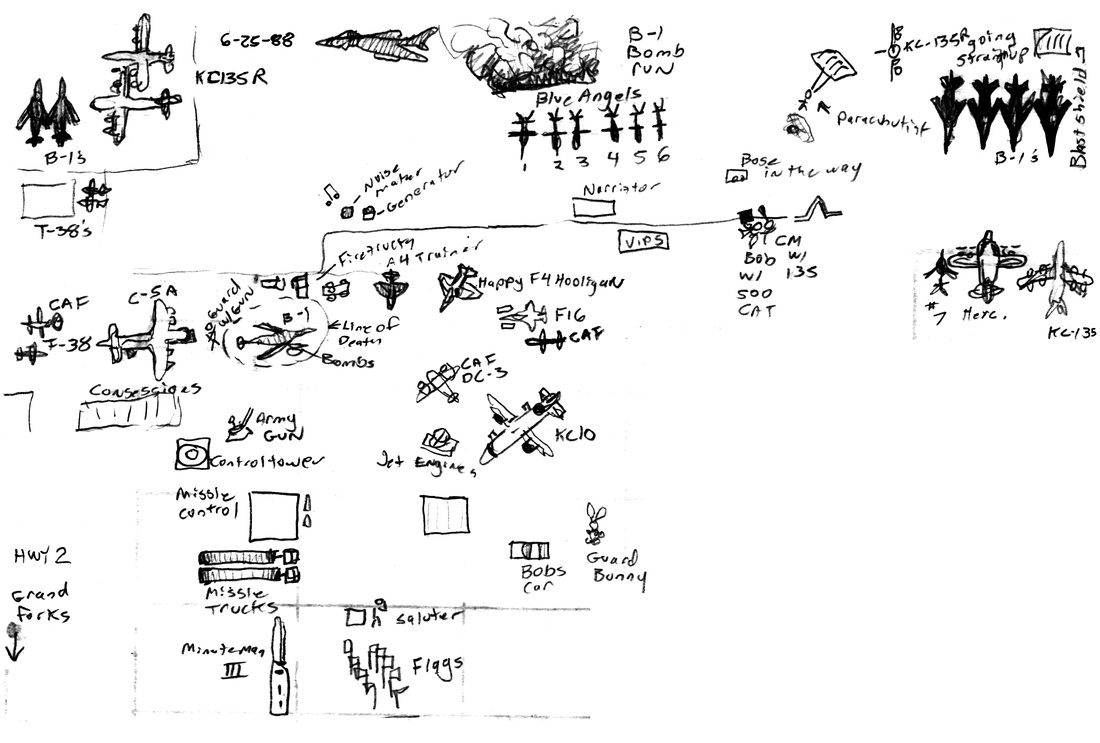 1988 GFAFB FlightlineMy 1988 sketch of the GFAFB 'Friends and Neighbors Day' flight line. Saturday, June 25, 1988. Not only does it show the layout (obviously not to scale) but it also illustrates some events of the afternoon.
See my blog post for more information about the show and references for the images.