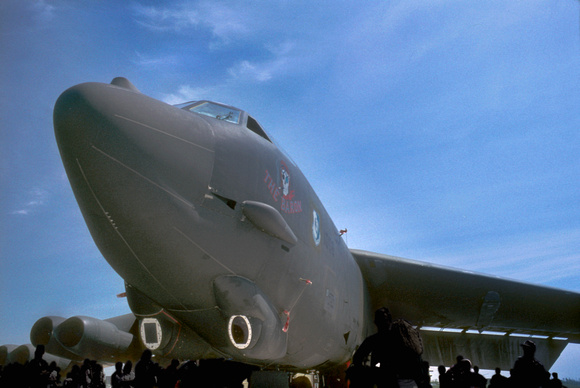 The Minot Air Force Base put one of their B-52H 'Stratofortress' on display at the Grand Forks Air Force Base (GFAFB) 'Friends And Neighbors Day' on May 27th 1989.
The 5th Bomb Wing is a United States Air Force unit assigned to Air Force Global Strike Command's Eighth Air Force. It is stationed at Minot Air Force Base, North Dakota. The 5th BW is one of only two B-52H Stratofortress wings in the USAF. In September 1991, the wing pulled its aircraft from continuous alert status Ð a job it performed for 35 years. The 5th Wing became the 5th Bomb Wing following the activation of Air Combat Command.
1989 & 2010 Craig Maas
Powered by ZENFOLIO User Agreement
Cancel
Continue