The last Fargo Airsho was 1989 and the next would be 1995, so if I wanted to attend an airshow I would have to travel. My friend Bob was game to drive up to Minot for this one. The highlight were two Ukrainian MIG–29 ‘Fulcrums’ a F–117A ‘Nighthawk’. This was one of the all-time classic airshow, no so much because of the show itself, but the adventures Bob and I had on the way there and back. But that’s another story.

Today we’re at the Minot Airport to attend the North Dakota Air Expo in conjunction with the ND State Fair. We arrived when the gates opened at 11:00 am. The Ukrainian MiG–29 ‘Fulcrum’ was up in the air for a practice flight.
Bob and I split up to photograph the static displays on the taxiway. There were military aircraft from around the region including Canada. [see Aircraft On Display below for a list.] I hurried in case it started to rain, but it soon the low clouds cleared off.
By 2:00 pm., Bob and I found as spot at the fence for the aerial portion of the show. There were three national anthems: the Ukrainian National Anthem “The Glory and the Freedom of Ukraine Has Not Yet Perished”, “Oh Canada”, and “The Star Spangled Banner”.

The announcer, Danny Clisham dropped hints about pyro. A B–52H ‘Stratofortress’ from the nearby Minot AFB flew over. I was able to catch the explosion as the pyro was timed the flyover.
The next demonstration was four T–38 ‘Talon’ trainers from Texas. TOGO 01–04 made passed in the: Finger, In-line and the Diamond formation.
The F–117A ‘Nighthawk’ (Holloman AFB, NM) flew passes. This secret stealth fighter didn’t land. Security concerns kept it under wraps at the Minot AFB. Major Jeff ‘Jammer’ Moore was at the controls, fresh off a tour over the night skies in Baghdad as Bandit 292.
The ultra-modern was F–117A was followed by a 1943 T–33 ‘Shooting Star’ trainer painted in USAF Thunderbird livery. This particular model was a Canadair CT–133 Silver Star 3 (CL–30) with a Rolls Royce Nene engine; flown by Ray Mabrey. Unfortunately, Mabrey would die in this plane on June 11, 1994, but today he was in his element.
The T–33 was followed by a Chinese MiG–15 ‘Fagot’ in Russian livery. Another Korean War era jet, the MiG–15 saw over 17,000 aircraft built and is still being flown by the North Korean air force.

A North Dakota native, Danny Clisham flew by in a A–10 ’ Thunderbolt II’. It was a great excuse to set off more pyro, as he made a bomb run over the runaway. I was impressed by its quiet GE TF34-GE–100 turbofan engines. Where most jets shake the ground, the A–10 was but a whisper until it’s “too late.”

The show was delayed for commercial traffic. Bob and I took portraits with the F–16C ‘Falcon’ and MiG–29 ‘Fulcrum’. We moved to a better location by the hangers at the end of the taxiway.

Team America flew three F–260 SIAI ‘Marchetti’ monoplanes. They were named Team of the Year in 1988, 1989 and 1991. The pilots are: #1 Chuck Lischer, #2 Barney Register, and #3 Brian Sanders. The F–260 is used as a light attack plane in over 20 countries. Their show featured many maneuvers including: the Hammerhead Stall and skywriting.

Two MIG–29 ‘Fulcrums’ headline airshows across the US and Canada this summer. The “Dawn of Freedom” tour celebrates a newly independent Ukraine. The tour was overseen by Major General Yarosrav Skalko, Deputy Commander of the Ukrainian Air Force with 16 member Ukrainian crew. The aircraft are piloted by: Col. Volodymayr Kandaurov and Col. Nykolay Koval, with Lt. Col. Valeriy Soloshenko in reserve. The tour team became known as the Ukrainian Tridents due to the Ukrainian Air Force trident insignia on the aircraft. A MiG–29A and one MiG–29UB (2-seat trainer) demonstrated the performance of their twin Tumanski turbofan engines. The MiG–29 is rated at Mach 2.28 and can climb 50,000 feet per minute. Clisham said, “The Ukrainians are performing maneuvers never before shown in North American: the daring Tail Slide and Cobra maneuvers.” The Tail Slide has the Migs: climbing until they runs out momentum, and then slide backwards tail first. The Cobra has the ‘Fulcrum’ climb; then nose over like a hooded cobra. After the MiGs deployed their braking parachutes and taxied to the flight line, Bob and I left. Photos and YouTube Video from Armed Forces Airshow 7/11/92 in Scranton, PA.

On the way to Minot, we drove past the Grand Forks Air Force Base. They’re having an airshow on August 30th, so we made plans to attend! 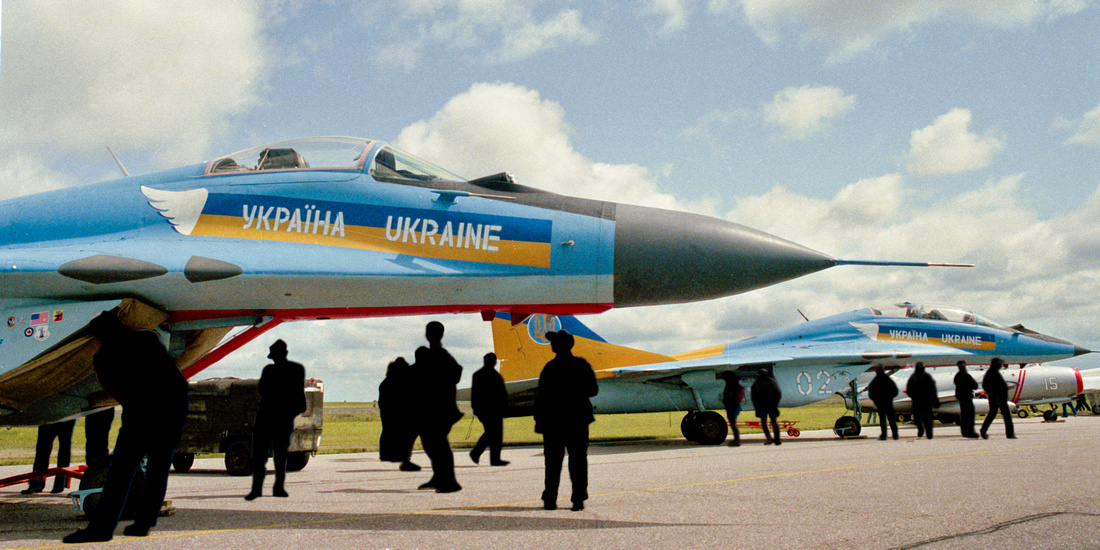 See the Full Gallery or the Gallery Slideshow for more photos from the North Dakota Air Expo: 100 in total including detailed photo/airplane descriptions. Bob Nelson shot with his Nikon N–8000 (wide), Nikon (F–4) with 300mm telephoto lens, and Leica body (only?). I shot with a Minolta SRT–102 and XG–7. 28mm, 50mm, and 135mm Minolta lenses.

Each aircraft link goes to its first photo in the gallery. The Ref Links/organization Links are where I found information for the photo descriptions. Usually Wikipedia if missing.
I also saw some helicopter blades and a flight line of five aircraft (Piper and Cessna).

OCR copies from the Minot Daily News. I also used information from the program, The Fargo Forum, and the Pantagraph (Bloomington, IL). 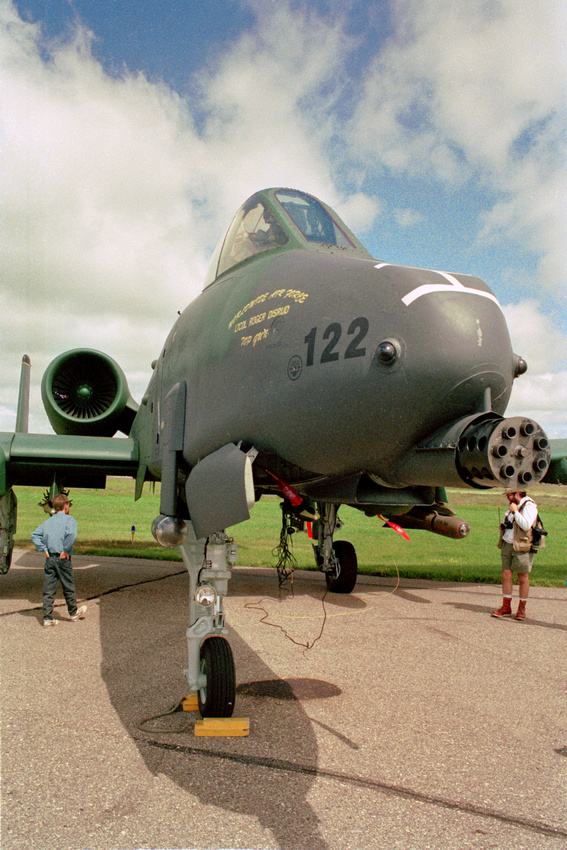