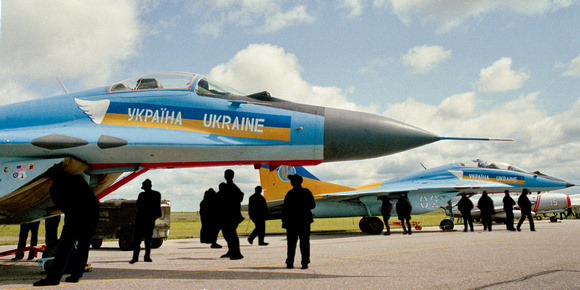 Ukraine Air Force MiG-29A and one MiG-29UB (2-seat trainer) 'Fulcrum' on display.
In the summer of 1992 following independence of Ukraine from the Soviet Union in December 1991 the Ukrainian Air Force embarked on a two ship Mig 29 Fulcrum tour of air shows in Europe and North America. The tour team became known as the Ukrainian Tridents due to the Ukrainian Air Force trident insignia on the aircraft. The tour was very successful but the Ukrainian Air Force did not reform a demonstration team until 1996 when the Ukrainian Falcons equipped with Mig 29 fighters was established and their debut made at RIAT RAF Fairford in 1997 displaying until disbanded in 2002.
The two MIG-29's appearing at Airshow '92 were painted in the blue and yellow colors of the independent Ukraine and displayed the Ukrainian Trident emblem. They had been participating in the "Dawn of Freedom" tour under the authority of the CIS' Ukraine.
Travelling with the aircraft were Maj.Gen. Yarosrav Skalko, Deputy Commander of the Ukrainian Air Force and a 16 member Ukrainian crew. Leading the staff of crack pilots were: Col. Volodymayr Kandaurov and Col. Nykolay Koval. Alternate Pilots in the group were Lt. Col. Valeriy Soloshenko. All had extensive experience in aerial maneuvers.
Photographed on July 25, 1992
1992 and 2018 Craig Maas
Powered by ZENFOLIO User Agreement
Cancel
Continue