Fargo-Moorhead celebrated their 100th Anniversary in June of 1975. There were events held all year, but the big celebration was held on June 21st and 22nd. The entire town got into the spirit of the Centennial. All the men grew beards- or a mustache in the case of my father. My mom wore an old fashion dress on the Soroptimist float in Saturday's parade. Our next-door-neighbor drove the KQWB 'Boogie Buggy' around town and in the parade. I was most excited about the Centennial All-Military Air Show: "featuring three of the nation's four military aerial teams." (Fargo Forum)
I was plastic aircraft model hobbyist, The NDANG was only a mile away, and I had spent a couple years in Civil Air Patrol, but I had never seen the Blue Angels. In April of 1975 I bought a Minolta SRT-102 camera with a 28mm, 50mm, and 135mm lenses to go with it. (The negatives were scanned with a Minolta F2900 Dimage film scanner at 2810 dpi in April of 2013.)

The excitement built quickly as the US Navy Blue Angels arrived in Fargo on Thursday, circling the city. On Friday, they flew through-out the day as the practiced their routine. On Saturday, our entire family was in Moorhead for the 10 am Centennial Parade. By the time we returned home the Blue Angels were flying over our backyard. Sunday, I was concerned about the weather. It had rained heavily all week. It was clouding up again and the wind was strong. The Fargo's Chamber of Commerce aviation committee were expecting 20,000 visitors. Attendance was free, and the farmers were unable to get into their flooded fields.

Dad and I arrived when it opened at noon. I photographed the static aircraft displays. Including a line of 'Century-Series' jet fighters: The F-100, F-101, F-102, F-104. F-105, and F-106. The Navy had their brand new F-14 Tomcat on display. Each branch of the military had their own aircraft with 5 from the Navy, 10 from the Air National Guard, 5 from the Air Force, and 4 from the Army (Helicopters). Nothing from the USMC, except Fat Albert the Blue Angel's support C-130.

The first aerial display of the day was a free-fall parachute demonstration by a single member of the Valley Sky Divers. It was very windy out. Winds of 22 mph with 26 mph caused the Army's Golden Knight team to cancel their parachute jump. Team captain Gene Dal Paggetto said, "It's just too much of a chance of our going into the crowd. We possibly could land on some people. They might be young children, and we never would forgive ourselves just to put on a show. It isn't worth it." (Fargo Forum)
Before the decision was made their C-130 circled the city for an hour waiting for a lull in the ND wind that never came.

The U.S. Army's helicopter demonstration team 'The Silver Eagles' flew next. They flew seven OH-6A Cayuse helicopters, trailing red and white smoke to show how maneuverable they are. The Silver Eagles team flew from 1972 until 1976. They were based at Fort Rucker, Alabama.
"The Silver Eagles flew seven aircraft during each demonstration: Lead, Left Wing, Right Wing, Slot, Lead Solo, Opposing Solo and Bozo the Clown.  Bozo wore the face of a clown and performed antics to entertain the audience while the other aircraft were positioning for the next maneuver.  Speeds and altitudes of precision maneuvers ranged from zero miles per hour at ground level to 140 miles per hour at one thousand feet.  The most unique thing about the performance was that there was at least one helicopter performing in front of the crowd at all times during the 35 minute presentation. " (eaglelead.com)

The four hour show finished with the Blue Angels. Lt. Al Cisneros narrated the show from the ground. The Blue Angels have three shows depending on the cloud ceiling height (8000, 3500, or 1500 ft.) It was cloudy but not too low, so they probably ran the 3500 foot show. The Blue Angels demonstrated their 'Close Canopy Separation' formation flying including the four aircraft Diamond and the six aircraft Delta; all at speeds of 500 mph or more. The two Solo aircraft did opposing passes that were very dramatic. I don't believe 'Fat Albert' the C-130 performed.

I had one photo left on my roll after the Blue Angels landed. I used it on this F-14A Tomcat. Considering it was a new camera, my first real air show, and an overcast day with slow Black & White film- the photos came out pretty well. I did spent quite some time this year (2013) rescanning the negatives with a Minolta F2900 Dimage Film Scanning and editing them in Adobe Photoshop. In addition to cleaning up images I also cropped some images, silhouetted out some distracting individuals, and hand coloring some Black and White images of the Blue Angels. 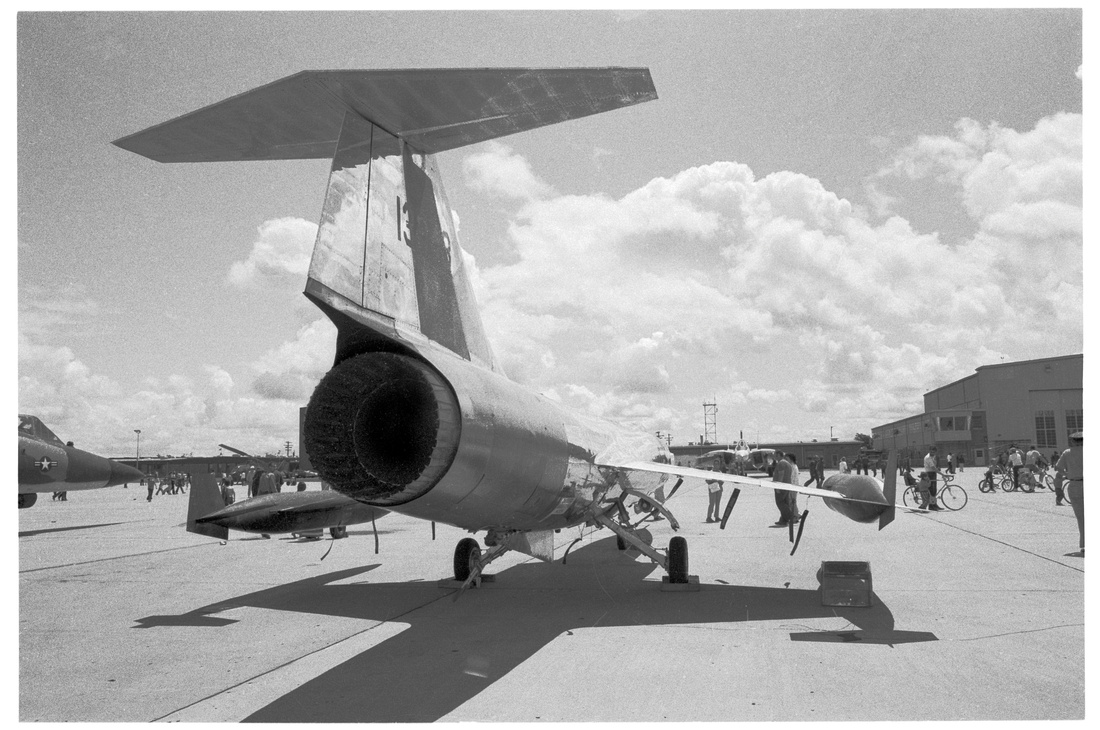 F-104 Starfighter TailThe F104 'Starfighter' was one of many Century Series aircraft. Fitting for the Fargo Centennial.

See the Gallery or Gallery Slideshow for more photos from the 1975 air show. 71 total including my detailed photo/plane descriptions.

Facing West toward the Flightline and runaway L-R: C-130 Hercules of the Golden Knights, the OH-6A Cayuse of the Silver Eagles, The A-6 Skyhawks of the Blue Angels, and the C-130 'Fat Albert' of the Blue Angels.