This was a low key air show. I may not known it was in town until I dropped off company at the airport that morning. I certainly wasn't prepared for it. My friend and fellow aviation/photography enthusiast, Bob Nelson, picked me up and off to the airport we went. Bob shot two rolls of B&W film (#1091,1092) All I had was my old Hanimex compact-A with a bad 40mm lens and a half roll of color print film, and my Minolta SLR, a 50mm lens and half a roll of slide film.

A Civil Air Patrol cadet is handing out food coupons on the way in. It was fun to see the CAP busy at the air show. It had been 12 years since I was a CAP cadet. It was an eclectic collection of aircraft as you can see from the list below. I spent most of my time around the Minot AFB F-15A 'Eagle' and Montana ANG F-16A 'Falcon'. Good thing Bob was along and shares his photos, or I wouldn't have much to show here. At the time I was only interested in current military aviation. I did get some photos of the Commemorative Air Force/Arizona Wing B-17G 'Flying Fortress' - It was the first WW-II bomber I had ever seen. Funny I wasn't more interested at the time. I had done a lot of reading on WW-II: bombers and fighters. Later I would recover my enthusiasm. Thankfully "Sentimental Journey" would be back in Fargo a number of times.

From my 1987 Journal, "It was announced the Falcon and Eagle would be leaving shortly, so we decided to wait. Shortly, turned out to be two hours. The F-15 'Eagle' went up first. It pulled up in front of us at a 60 degree angle and was gone. Bob and I  bought aircraft pins for $3. I got a F-16 'Falcon' while Bob got a P-51 'Mustang'. The F-16A 'Falcon' went up but at a 70 degree angle with a roll. It was so cool: the sun and mist rolling off the wing. I had used up all my film by this time. The aircraft displays were packing up. The B-17G crew had struck down their displays and concession stand. They boxed it up and wrenched it up into the bomb-bay of the B-17G. After the Falcon took off, so did everyone else. Bob and I celebrated at Godfathers Pizza."

It took hours of work: adjusting exposures, color balance, and cropping to get the Hanimex photos to look half decent. I could do nothing about the out-of-focus images. I find large crowds of people milling around the aircraft to be distracting so occasionally you'll see these people as silhouettes- even more hours in Adobe Photoshop. 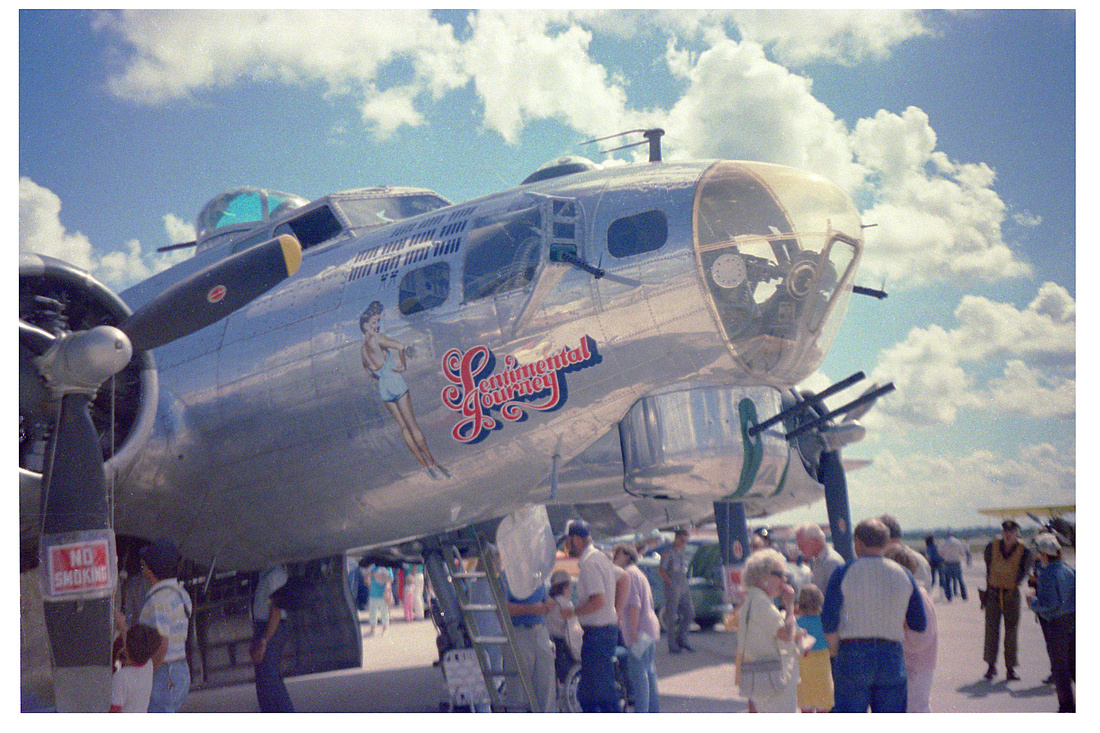 See the full Gallery or the Gallery slideshow for more photos from the air show: 51 total including my detailed photo/airplane descriptions. All the Black & White photos are © Bob Nelson.

I have scanned and made available additional Historic Information from the Fargo Forum, and the Confederate Air Force Air Display '87 Program.

Scheduled but not there. It is possible some of these were on the south end, where I had no photos

The F-15A 'Eagle' from the Minot AFB flew off before the show was over.
The F-16A 'Fighting Falcon'  from the Montana ANG did a pass before leaving.