This was the second part of a multi-week air show to celebrate the opening of the new Hector Airport Terminal. Friday, I watch the 'Blue Angels' practice from work. They would be performing on Saturday and Sunday. I was attending both performances. On Saturday I was going with my cousins and Sunday I was going with my friend and fellow aviation & photographer enthusiast: Bob Nelson.

Saturday, I was running late and missed the A-7 demonstration. By noon all the parking lots were full all the way back to Fargo North High. The F-15 was in the air as we walked to the old terminal. This was followed by two Huey 'Cobra' helicopters. The North Dakota Air National Guard took to the air with a four plane F-4D 'Phantom II' flight. They did some passes in formation. It suddenly clouded up. The Blue Angels jumped the schedule, hoping to finish before it rained. They made a couple passes but lightning and rain suspended the show. My parents and grandparents left at that point. I stayed and talked with my cousins in the aircraft hanger. Like many summer rain storms it was over quickly and soon the sun was out. I took some photos of the static displays. The F-16A 'Falcon' and FA-18B 'Hornet' were first time visitors and I was excited to see them. I find crowds of people distracting in my photos. I try to work around them, but when I can't I will silhouette them out of my photos using Adobe Photoshop. The 'Blue Angels' returned to a clear blue sky.

Sunday, I woke up with a pretty good sunburn. Bob wanted to get there early while the sun was low in the sky and no crowds.  I spent most of my time photographing my pet aircraft: A-10, F-14, F-15, F-16, and F-18, which was a shame. There were some really interesting aircraft that I would never see again. But that's the problem with shooting film. I shot five rolls of color film (a-e) and feel like I missed half the air show. Bob shot one roll of color film (f) and three rolls of black and white film. (g,h,i) Bob was shooting with a Leica M2 and 21mm ultra wide lens on the ground. And a Nikon FM, auto-winder, and a 300mm ƒ4.5 lens for the aerial demonstrations. I had two Minolta SLR bodies, a 28mm, a 50mm, and 135mm lens. I've arranged the photos geographically rather than chronologically as there was a lot of overlap between these four cameras. The Blue Angel photos are of two performances from two locations; a mile apart.
Mom and dad were working at the YMCA lunch booth. I ran into my grandfather- another set of photographs I wish I had taken. I talked with some of the pilots by the static displays and bought a Hill AFB hat from the F-16A pilot. Bob and I stayed for the F-14 'Tomcat' and F-15 'Eagle' aerial demonstration. We both wanted to photograph the 'Blue Angels' from a different location. Bob suggested the 12th Avenue Bridge- a raised platform overlooking the airport. I didn't have much success, my shutter speed was far too slow. I blame my sunburn, I was roasting up there. From 12th avenue it was a short drive to our favorite pizza place. 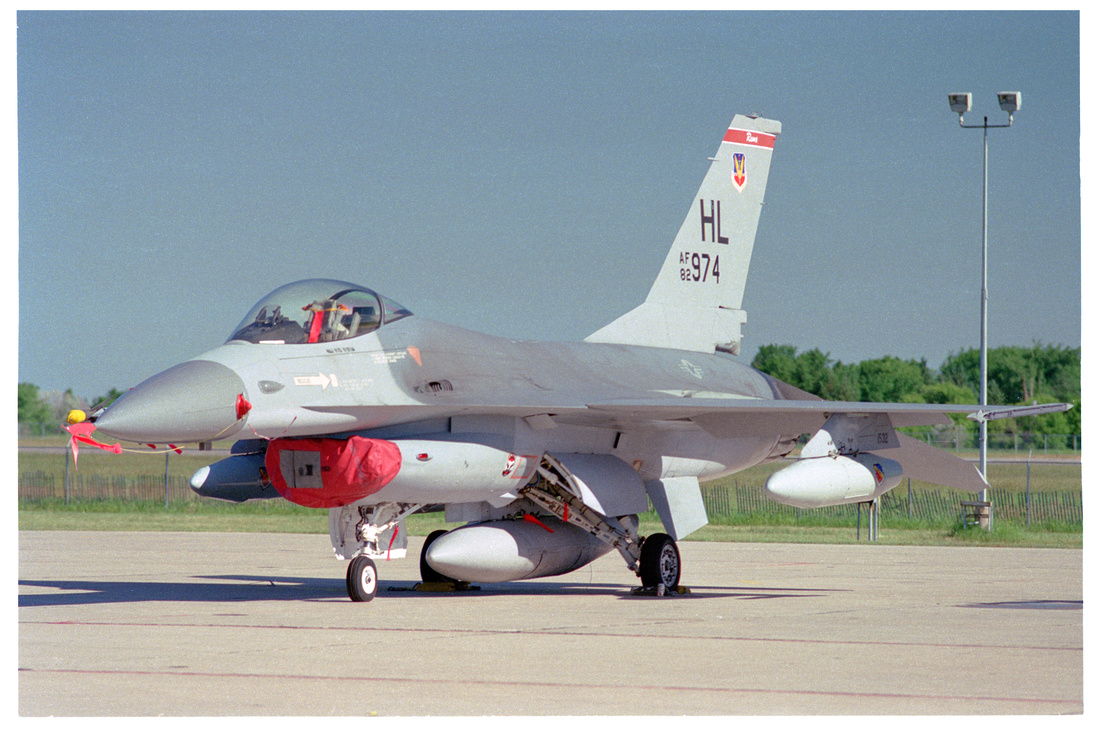 F-16A Falcon by Bob NelsonSunday morning, June 22nd 1986. The first time I got to photograph and touch my all time favorite aircraft: the General Dynamics F-16A 'Fighting Falcon' This was Col. John Boyd's dream and it became mine as well.

See the full Gallery or the Gallery slideshow for more photos from the air show: 166 total including my detailed photo/airplane descriptions.

I have scanned and made available additional Historic Information from the Fargo Forum, The Blue Angels, and the Fargo Airsho Program.

North side of Flightline (west to east)

South side of Flightline (east to west)