The Red River Valley Wing of the Confederate Air Force sponsors the Fargo Airsho '86 as a fund raiser to build a museum although at the time this didn't really register. Instead I woke up feeling kind of sick. I wasn't sure I wanted to go at all. Odd, as I had not seen an air show since 1977. I pick up my friend and fellow aviation/photography enthusiast, Bob Nelson and we head over to the old airport terminal. This is a CAF show; the aircraft are primarily World War II vintage. The North Dakota Air National Guard have parked a couple of their jets on the taxiway for us to see. There are some aerial demonstrations including the Red Baron Pizza Squadron flying PT-23 Stearman bi-planes. In 1986 many of the most interesting aircraft did not appeal to me at the time and I left somewhat bored. I shot less than one roll of color film. Bob shot three rolls of B&W film (#1069, 1071, 1072)- it should be easy to figure out who shot what. I find large crowds of people milling around the aircraft to be distracting so I silhouette these people in some photos using Adobe Photoshop. I also adjust exposures, color balance, and crop a few images.
If I could go back in time, I would photograph this show in depth: site photos.. how all the aircraft were arranged; the Red Baron Squadron- if only for all the Red Baron Pizza I eat; the Warbirds in the air; more details (Bob covered a lot of that); the beautiful P-51D that I only photographed once (double exposure); and the F4U fuselage, that I assume would become the Corsair on display in the Fargo Air Museum 20 years later. It was an excellent show, if only I had paid more attention. 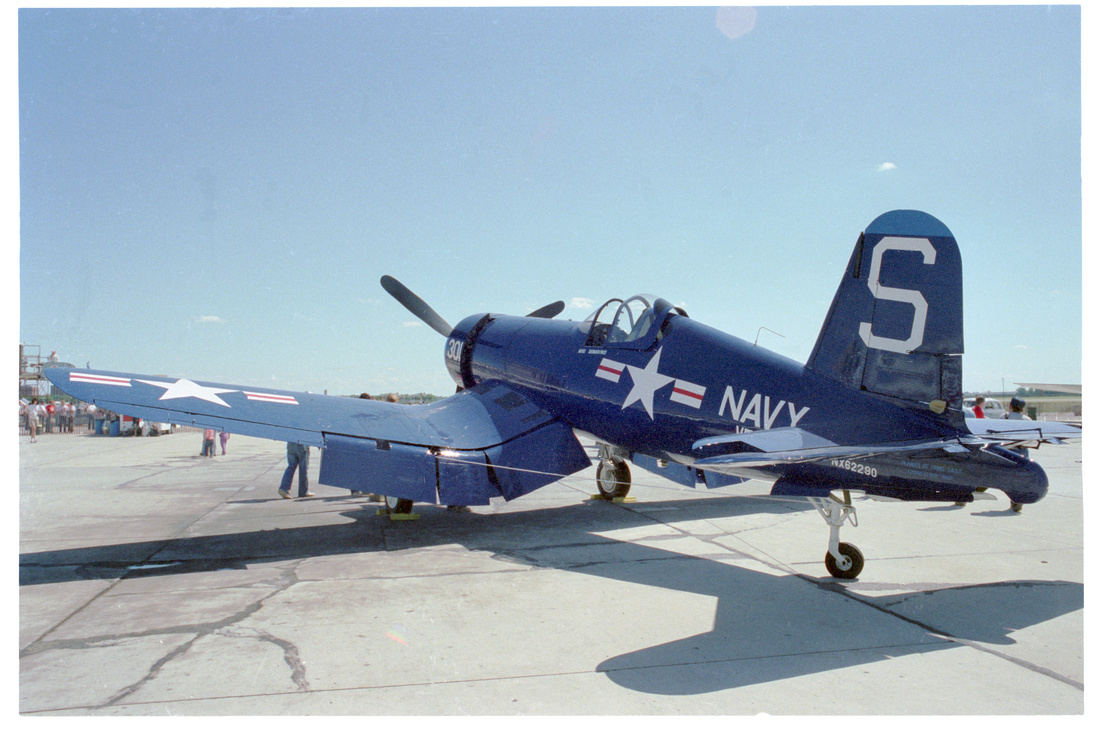 Corsair TailFG-1D (F4U) Corsair sitting in the sun at Airshow '86, a fund raiser for the Red River Valley Wing of the Confederate Air Force.

See the full Gallery or the Gallery slideshow, for more photos from the CAF air show: 42 total including my detailed photo/airplane descriptions.

Note: colored links in the ID column lead to photos of the aircraft in the Gallery.