The 1997 Fargo AirSho was also a celebration of the North Dakota Air National Guard’s 50th Anniversary. The show headliner was the US Navy Blue Angels, but the NDANG also performed a four-flight demonstration. To honor their current and past members they flew a couple passes over Hector Field in their current F–16A ‘Falcons’ and original F–51D ‘Mustang’. I believe Robert Odergaard flew the Mustang. My co-pilot, Bob Nelson was content to photograph the performances this weekend. I was looking to do something different. Learning from my mistakes recording the 1996 GFAFB airshow, I would videotape this show with mixed results.

Thursday
The USN Blue Angels arrived in Fargo and although it was raining they practiced that afternoon. I stood under the eaves and watch them fly overhead. They scared the neighbor’s dogs.

Friday
I watched the Blue Angels practice while I mowed the backyard and trimmed our apple tree. The foliage was in the way but I captured a couple photographs.

Saturday
I borrowed my bother-in-law’s camcorder. Once at the show, I couldn’t find Bob on the flight-line. While walking back and forth, I documented aircraft data with the camcorder. The NDANG “Happy Hooligans” launched four F–16A ‘Falcons’. The sky turned cloudy, the wind picked up, and it started to sprinkle. I shot some film, but was most comfortable running the camcorder. Rod Gier, the “Mad Bomber” set off his pyro as the Falcons flew past on a simulated bomb run. I rubbed my hands in the warmth of the blast.
I found Bob; then he went off to find lunch at Red Baron Pizza. I watched the Sierra Aces Acrobatic team through his 300 mm ƒ2.8 lens. Bob brought his Norman flash units. He photographed the PT–13D ‘Kaydet’ and F–51D ‘Mustang’ using colored gels. After the Blue Angels landed, we wandered around flight-line.

Sunday
I returned to the airshow with Mom, Dad, Paul, Suzanne, and Sean. This would be Sean’s first airshow at age 6-months. I found a spot close to the center flight-line. [The lawn chair made the video steadier today.]
It only took two minutes to find Bob today.
I asked the F/A–18 pilot questions about his ‘Hornet’. (The F–14 pilot was busy.)
Wayne Handley and his Oracle “Raven” went into a long flat spin counting out the revolutions. (24)
The “Cool Cuts” performed in three Robinson 22 helicopters.
I recorded the Sierra Aces. Suzanne returned with a Red Baron Pizza. I had her deliver a slice to Bob.
Jim Franklin and his son Kyle were cooking in the Waco. The wing walking routine is just crazy.
“Fat Albert” went airborne via RATO. So cool to see the rockets throw that big aircraft into the sky.
The Blue Angels followed. Their routine was expanded because there are fewer clouds today.
I caught the surprise pass but forgot to tell mom there were two planes. Sean was scared and started crying his head off.

Sunday evening, Mom was in the backyard mowing, when the Blue Angels took off for their next show. July 12 in Pensacola Beach, Florida. 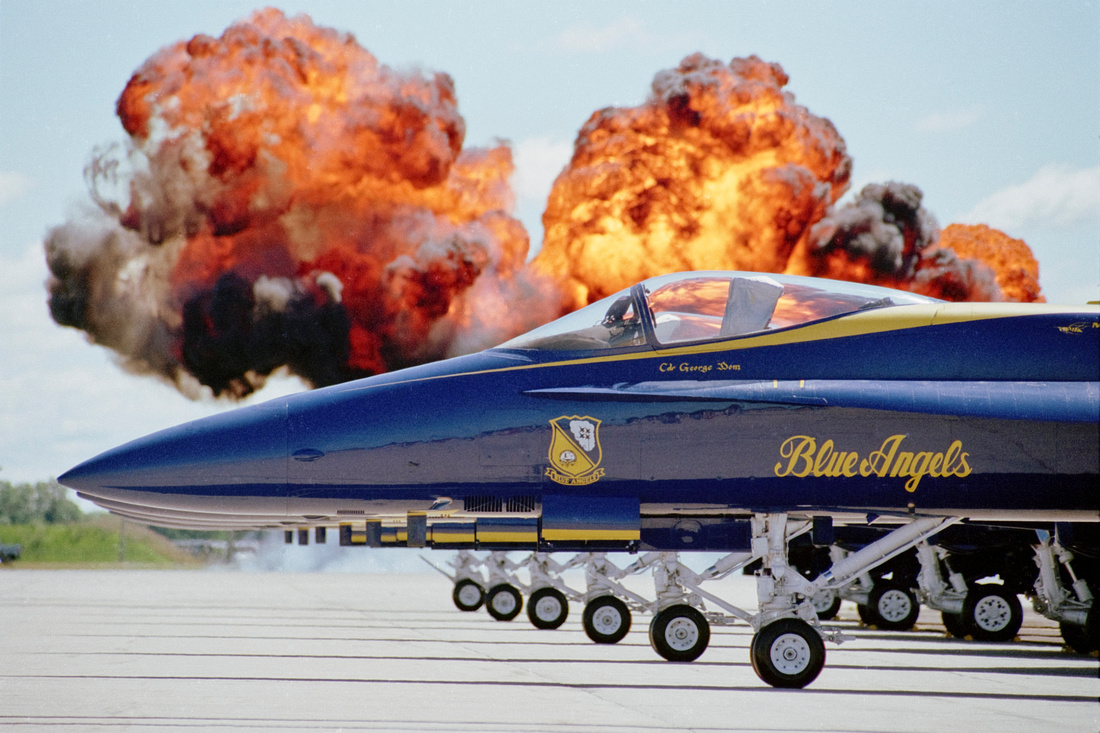 See the Full Gallery or the Gallery Slideshow for more photos from the Fargo Airsho: 98 in total with detailed photo/airplane descriptions. Bob Nelson’s photos (color print CN181–185) are ©1997, 2018, 2019; used with permission. My photos are color print film. ©1997, 2019.
Although the video clips were interesting, the quality wasn’t great. I posted Sunday’s Blue Angel performance as the best example. It was assembled in iMovie this year: 2019. 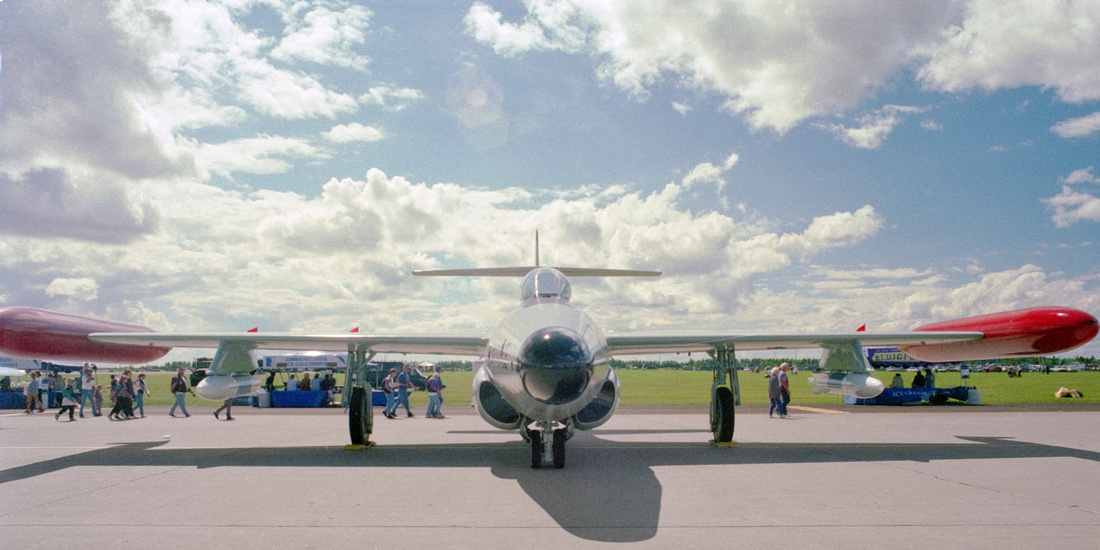 F-89 ScorpionA Northrop F-89 'Scorpion' fighter interceptor on display by the NDANG "Happy Hooligans." They flew this jet from 1960-1966. (Paul Steffes) Photo by Craig on Saturday, July 5, 1997 at the Fargo AirSho.