One of the better airshows I’ve attended. No Blue Angels, no USAF Thunderbirds, but a nice collection of static displays and aerial demonstations from WW-II and modern military aircraft. It was one of the few Fargo airshows that was on the west side of the runaway, which meant the sun was in front of the performers rather than behind. Much better for photography especially on Saturday. The show was also meaningful because Doug Nelson, Bob’s father, joined us. Doug was an Engineer on the B–25J during WW-II. My parents and their cousins also attended, which was fun.

Saturday
It was sprinkling when we arrived, but soon cleared and the sun came out. There was a A–37 ‘Dragonfly’ on the end of the flight line. I left Bob and Doug to play tour guide for the Maas clan. When I came back, Doug Nelson talked about his duties and missions flying the B–25 during World War II. We watched the aerial demonstrations from under the shade of a KC–10 ‘Extender’ wing. (See schedule below) After the FA–18 ‘Hornet’ landed the show was over.

Sunday
Bob and I arrived at the Fargo Airsho as it opened. Unfortunately it was windy and the skies were overcast. We split up to photograph the static displays. Soon crowds arrived and photographing each aircraft without distract was impossible. Bob and I met up at the F–117 ‘Nighthawk’ stealth fighter. We stopped at the CAF booth to do some shopping. The aerial demonstrations were limited due to the low clouds. We watched the CAF ground crew refuel the B–25 ‘Mitchell’. I had Bob photograph me with the B–1 ‘Lancer’. We watched the morning run of ‘Shockwave.’ I did not photograph the M2 ‘Bradley’ fighting machine demonstration, I did photograph Bob driving the M977 refueling truck. We stopped to looked at the helicopters before leaving. 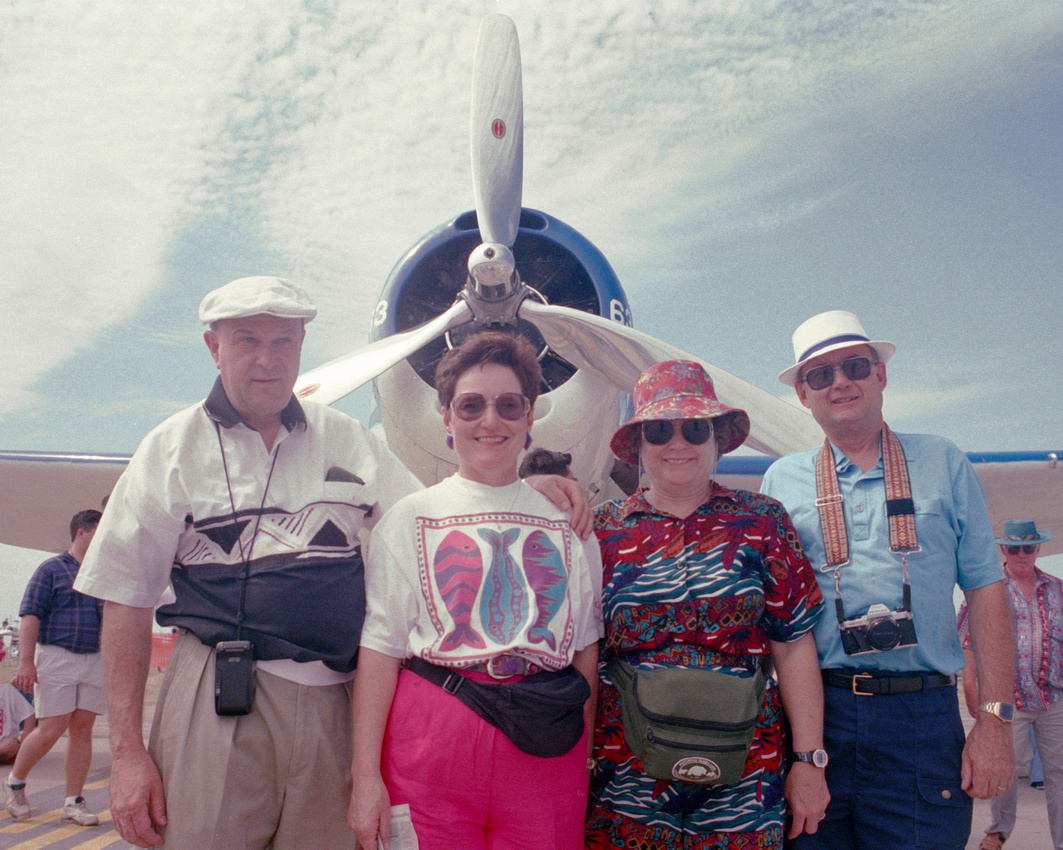 See the Full Gallery or the Gallery Slideshow for more photos from this airshow: 161 in total with detailed photo/airplane descriptions. Bob Nelson’s photos (Color Print CN140–146) are copyright 1995, 2018; used with permission. My photos are color print film. ©1995, 2019. I shot one roll with my father’s Olympus 35-SP Rangefinder. A camera that was noted for it’s fine optics. I wanted to use a fill-flash, and its leaf shutter allows high-sync-speeds. I’m not sure it worked. I don’t see any photos with obvious fill-flash. Photos with an ‘a1’ suffix have major changes in Adobe Photoshop, usually to minimize distracting elements. I also struggled with color balance.
Each aircraft link goes to its first photo in the gallery. The numbered links are where I found information for the photo descriptions. Usually Wikipedia if missing. 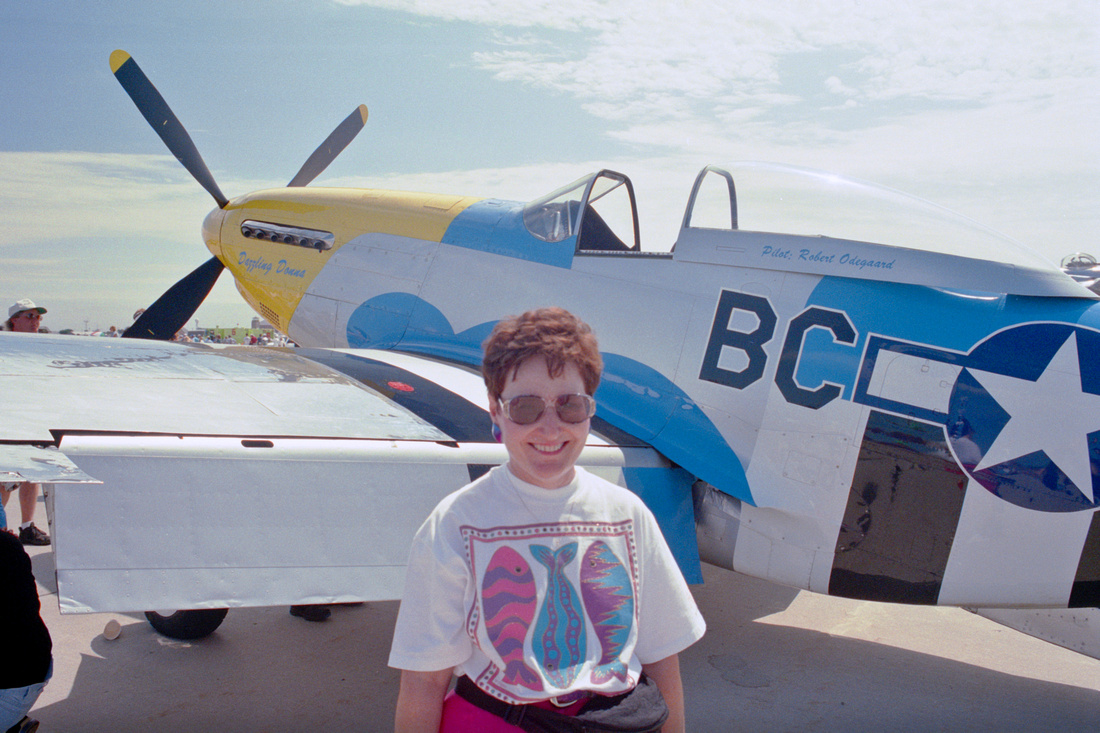 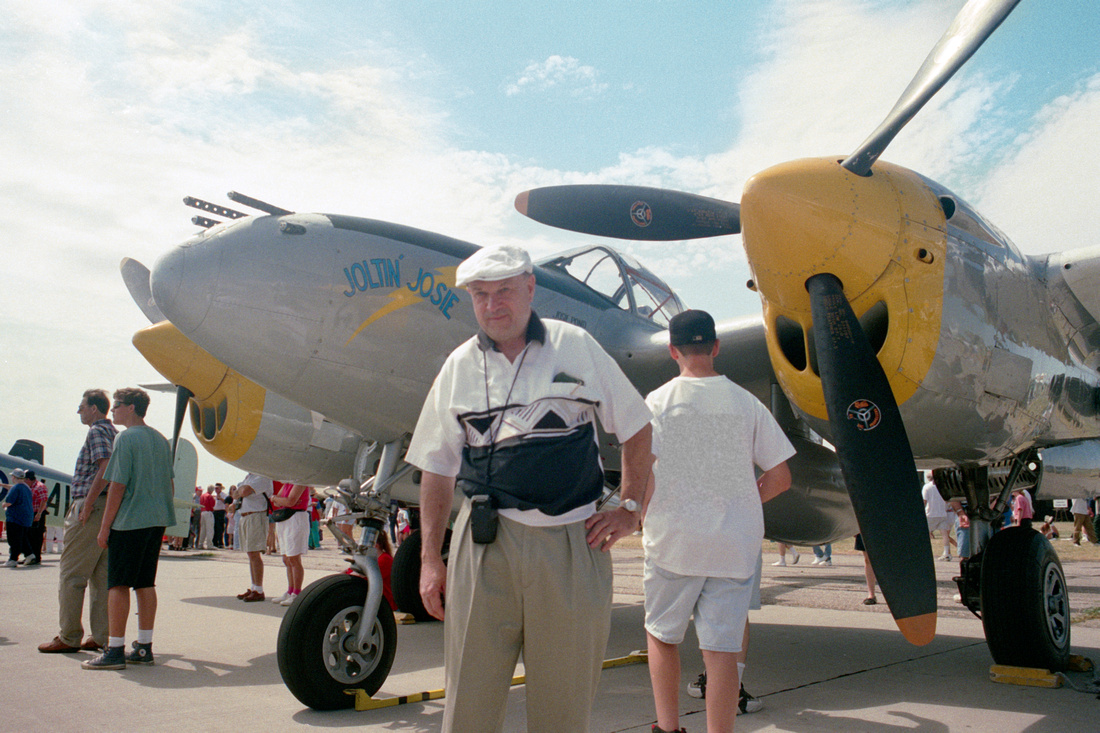 Ray Maas with LightningRay Maas with the Lockheed P-38J-20-LO 'Lightning' "Joltin' Josie" This was Ray's favorite WW-II aircraft as a child. Photo by Craig on Saturday, August 12, 1995 at the Fargo Airsho.