I attended the 1995 Friends and Neighbors Day at the GFAFB. My sister tagged along with Bob and I. All three of us shot photos. The show started with aerial demonstration by the Commemorative Air Force B–25J “Miss Mitchell”. We watched a fire-fight demonstration. Bob was talking with a member of the 319th Security Forces Squadron who gave us a play by play.

Men in desert-camo rush the US flag lobbing colored smoke grenades, shooting blanks, ‘killing and torturing’ the men in the green-camo. The Canadians in a CF–18 ‘Hornet’ zooms in and provides cover. Explosions filled the sky with black smoke and orange flames past the runaway. The cavalry cames in shooting. The bad guys refused to die, even after a couple hundred rounds. Our guide said 3rd world armies don’t use the armored trucks, they prefer using Toyota pick-up trucks, “Armored trucks are sitting ducks: they’re slow, get stuck and are easy to disable.”

We wait at the fence-line for the Thunderbirds to go up. It was hot and partly cloudy (about 50%). Lt. Colonel Stephen Andersen (Thunderbird Leader #1), called out on the radio, “Thunderbirds let’s run ’em up”. The Pratt and Whitney FW101 engines were at full throttle. This year’s Thunderbird team is made up of former F–15E flight instructors. More clouds rolled in from the north, so they finished with a ‘Horizontal Bomb Burst’.

My sister went back to the van. Bob and I photographed the flight line: the Holloman F–117A, the SDANG F–16C, the Minot AFB B–52H, and the B–25J. The crowd thinned out. We watched as the crew prepped the F–117A for flight. When it left, we left. 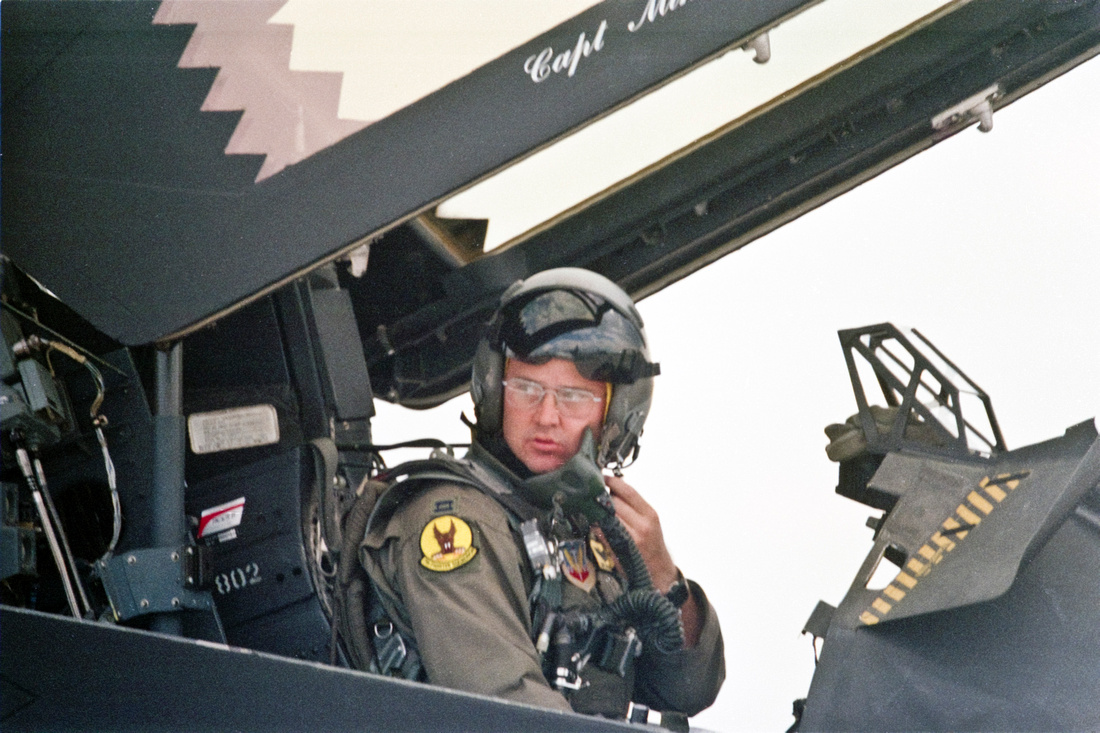 See the Full Gallery or the Gallery Slideshow for more photos from the Grand Forks Air Force Base: 124 in total with detailed photo/airplane descriptions. Bob Nelson’s photos (Color Print CN133–139) are copyright 1995, 2018; used with permission. My photos are color print film. ©1995, 2019. Suzanne’s are the same.
Each aircraft link goes to its first photo in the gallery. The numbered footnote links go to where I found information for the photo descriptions.. usually Wikipedia if missing.