Galleries 6
Collections 0
Groups 0
Created 8-Feb-13
Modified 15-Jun-20
Our parents, Ray and Char Maas, celebrated their 50th wedding anniversary on August 31, 2008. Mom and dad love to travel together and they especially enjoy traveling aboard a cruise ship, so I suggested that for this special occasion, we send them on a cruise. Craig was immediately on board. I queried mom one day about where she would most like to travel. She answered instantly “Europe!” When I asked dad the same question, he told me he had always dreamed of journeying to the Holy Land. After a little research, we found a cruise that seemed to fit their dream vacation: A Princess Cruise traveling around the Mediterranean Sea.

On their 49th wedding anniversary, we surprised them. Slowly they opened several packages indicating that they might be traveling: miscellaneous take-along travel items, Euro coins, and finally the Cruise brochure indicating the trip we had planned for them. They were both so excited! Mom was eager to learn about every little detail planned for this trip, so a few months later, I presented her with a binder giving her a day-b-day itinerary of the trip, beginning with five days in Tuscany. I don’t think there is a co-worker, neighbor or relative that hasn’t seen the “Anniversary Trip” binder! A visit to the Maas house always included the excitement of sharing their “trip of a lifetime!”

The year went by very quickly and before we knew it, Craig was taking them to the airport. First, they stopped by Vision Bank for their travel cash. Upon arrival, they were presented with a $50 check-card from the bank to enjoy on their trip. Next stop was the airport and they carefully brought up their two large bags, each one carefully packed and weighed beforehand so as not to exceed the 50 pound limit. Three flights later they were in the romantic city of Florence, Italy. Fifty years ago that day, Ray and Char Maas began a romantic journey of their own, beginning with their marriage in a small Presbyterian Church in Jamestown, ND. Fifty years later, the romance continued as they held hands in a charming Italian restaurant overlooking the dreamy river Arno.
- Suzanne Dobbins 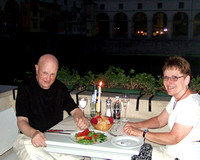 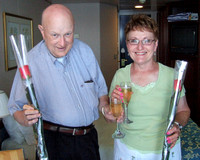 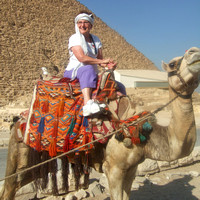 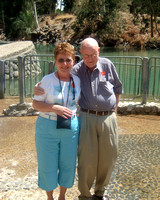 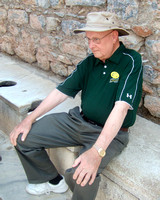 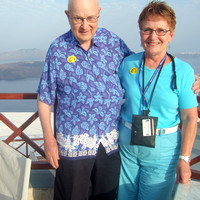