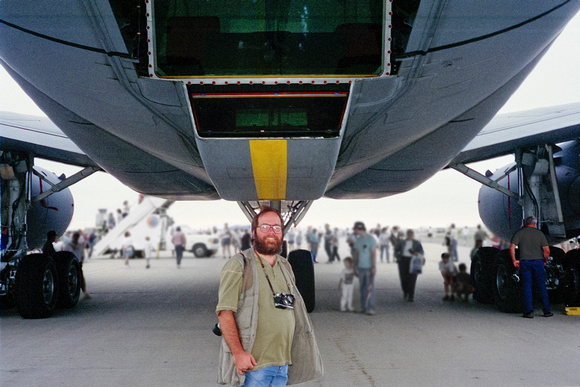 The KC-10 Extender first flew on 12 July 1980, but it was not until October the same year that the first aerial refuel sortie was performed. The design for the KC-10 involved modifications from the DC-10-30CF design. Unnecessary airline features were replaced by an improved cargo-handling system and military avionics. Meanwhile, the KC-10 retains 88% commonality with its commercial counterparts, giving it greater access to the worldwide commercial support system.[4] Other changes from the DC-10-30CF include the removal of most windows and lower cargo doors. Early aircraft featured a distinctive light gray, white and blue paint scheme, but a gray-green camouflage scheme was used on later tankers. The paint scheme was switched to a medium gray color by the late 1990s.
A jet aircraft refuels from a gray three-engine tanker via a long boom located under the tanker's aft fuselage.
The KC-10's mixed refueling system of hose-and-drogue and flying-boom allow it to refuel the aircraft of the U.S. Air Force, U.S. Navy, U.S. Marine Corps and allied forces.

The most notable changes were the addition of the McDonnell Douglas Advanced Aerial Refueling Boom (AARB) and additional fuel tanks located in the baggage compartments below the main deck. The extra tanks increase the KC-10's fuel capacity to 356,000 lb (161,478 kg), nearly doubling the KC-135's capacity. The KC-10 has both a centerline refueling boomÑunique in that it sports a control surface system at its aft end that differs from the V-tail design used on previous tankersÑand a drogue-and-hose system on the starboard side of the rear fuselage. The KC-10 boom operator is located in the rear of the aircraft with a wide window for monitoring refueling. The operator controls refueling operations through a digital fly-by wire system. Unlike the KC-135, the KC-10's hose-and-drogue system allows refuel
1995, 2019 by Craig Maas.
Powered by ZENFOLIO User Agreement
Cancel
Continue