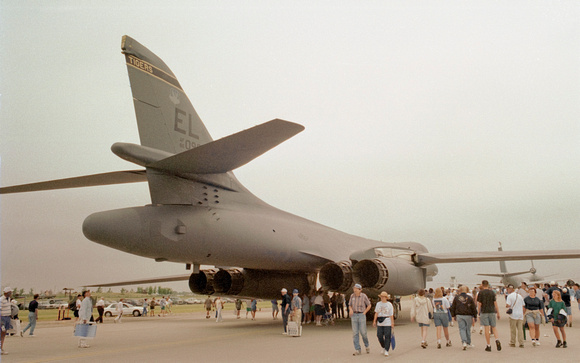 The B-1B 'Lancer' has a blended wing body configuration, with variable-sweep wing, four turbofan engines, triangular fin control surfaces and cruciform tail. The B-1's defensive electronics include the Eaton AN/ALQ-161A radar warning and defensive jamming equipment, which has three sets of antennas; one at the front base of each wing and the third rear-facing in the tail radome. Also in the tail radome is the AN/ALQ-153 missile approach warning system (pulse-Doppler radar). The ALQ-161 is linked to a total of eight AN/ALE-49 flare dispensers located on top behind the canopy, which are handled by the AN/ASQ-184 avionics management system.[88] Each AN/ALE-49 dispenser has a capacity of 12 MJU-23A/B flares. The MJU-23A/B flare is one of the world's largest infrared countermeasure flares at a weight of over 3.3 pounds. The B-1 has also been equipped to carry the ALE-50 towed decoy system. -[wiki]