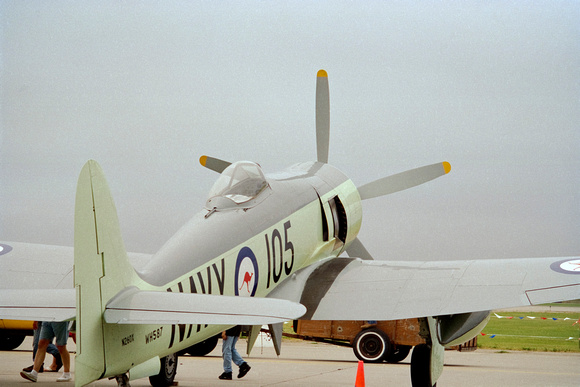 The Sea Fury is a navalised aircraft, capable of operating from the aircraft carriers of the Royal Navy. It was heavily based on preceding Hawker fighter aircraft, particularly the Tempest; features such as the semi-elliptical wing and fuselage were derived directly from the Tempest but featured significant refinements, including significant strengthening to withstand the stresses of carrier landings. While the Sea Fury was lighter and smaller than the Tempest, advanced aspects of the Sea Fury's design such as its Centaurus engine meant it was also considerably more powerful and faster; the Sea Fury has the distinction of being the final and fastest of Hawker's reciprocating engine aircraft, as well as being one of the fastest production reciprocating engine fighters ever produced. -[wiki]