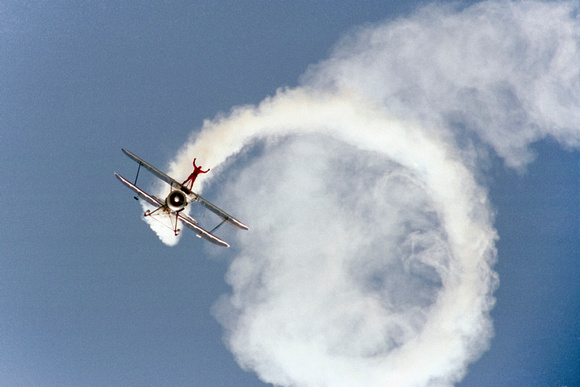 Waco UPF-7] "Jolly Roger" flown by Jim Franklin, Kyle Franklin: wing walker.
Franklin is the only airshow pilot to be "red flared" at EAA AirVenture OshkoshÑa signal from the airshow controllers that an unsafe act has been seen, commanding the pilot to immediately land. At the show in 1975, his debut there, he had been flying inverted for his ribbon-grab when the aircraft's tail made contact with the grass, resulting in the flare. The penalty meant he was barred from participating in airshows for nearly 3 years.
On July 10, 2005, Jim Franklin and Bobby Younkin collided in mid-air while performing their Masters of Disaster routine. Both pilots were killed. Franklin's son Kyle married Younkin's daughter Amanda in 2005. The two would continue in aerobatics with Kyle flying and Amanda wing-walking. On March 12, 2011, Kyle's Waco lost engine power and crashed during an airshow. Both were injured in the crash and subsequent fire, and Amanda died of her injuries on May 27. -[wiki]