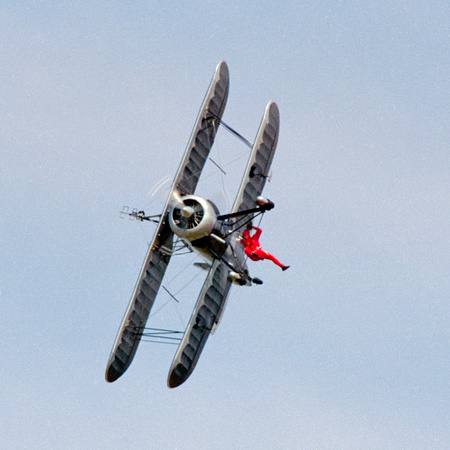 Waco UPF-7] "Jolly Roger" flown by Jim Franklin, Kyle Franklin: wing walker.
Jimmy Marshall Franklin (May 16, 1948 Ð July 10, 2005) was an American aerobatic pilot. He performed at airshows, both solo and as part of teams, for over 38 years until his death at an airshow in Moose Jaw. Born and raised in Lovington, New Mexico, Franklin learned to fly at age 8 and bought his first airplane (a UPF 7 Waco) at 19 and flew his first airshow the same year.. In the 1990s, he and Les Shockley, the inventor of the Shockwave Jet Truck, modified his Waco, attaching a General Electric J85 jet engine to the underside. It was in this aircraft that Franklin's son Kyle became the first person to wing-walk on a jet powered aircraft.-[wiki]