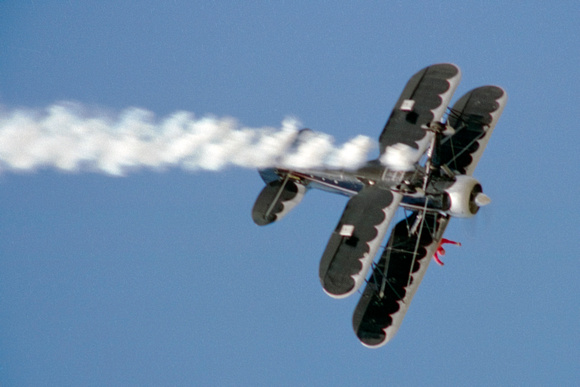 Waco UPF-7] "Jolly Roger" flown by Jim Franklin, Kyle Franklin: wing walker.
The Waco N2369Q was the original Waco Jimmy bought in 1967. It was flown with the original 220 Continental engine for several years, then upgraded to a 330 Jacobs engine, then to a 450 Pratt & Whitney when it became the "Jolly Roger." After the "Jolly Roger" was damaged, Jimmy was already in the process of building another Waco. In the mid 80's, Jimmy rebuilt the "Jolly Roger" with a monster 600 horsepower 1340 Pratt & Whitney engine. It had three possible cockpits, symmetrical wings, re-enforced fuselage, extra flying and landing wires, and lots of other little additions to make this one mean airplane. In the mid 90's the "Jolly Roger" a 450 P&W was put on in it's place. -[franklinairshow.com]