Galleries 5
Collections 0
Groups 0
Created 21-Aug-13
Modified 15-Jun-20
AirPower History Tour
The Sequester killed the Fargo Airho and the airshow in St. Cloud. Grounding the Blue Angels and The Thunderbirds killed all the big airshows across the country. But the Fargo Air Museum did not leave us air enthusiasts in the lurch. The booked in the Commemorative Air Force's AirPower History Tour. They arrived with four WW-II Bombers, two of which I've never seen: The B-29A Superfortress and B-24 Liberator. The Texas Flying Legends Museum brought up a B-25J Mitchell and a FM-2P (F4F) Wildcat. Along with the Fargo Air Museum's collection we had plenty of World War II aircraft to view. They also offered tours of the interior, which I took advantage of and rides on the Heavy Bombers, which I didn't- too rich for my blood. I also photographed the aircraft take off and land. I had a week's worth of fun. Additional aircraft: B-17G Flying Fortress, T-28A Trojan, P-51D Mustang (2), F4U Corsair, TBM, F-4D Phantom, and Cirrus Vision Jet SR22T mock up. 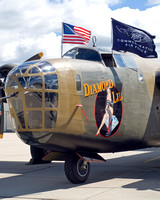 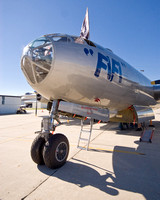