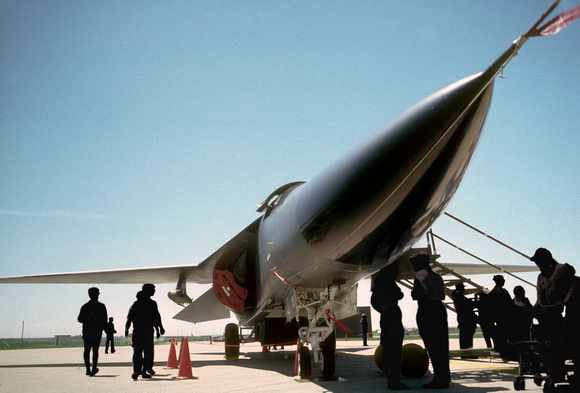 The General Dynamics F-111F 'Aardvark' was a supersonic, medium-range interdictor and tactical attack aircraft. Developed in the 1960s by General Dynamics, it first entered service in 1967 with the United States Air Force. The F-111 pioneered several technologies for production aircraft, including variable-sweep wings, afterburning turbofan engines, and automated terrain-following radar for low-level, high-speed flight. The USAF F-111F was retired in the 1996, its supersonic bomber role has been assumed by the B-1B Lancer. (Wikipedia)
At the Grand Forks Air Force Base (GFAFB) 'Friends And Neighbors Day' on May 27th 1989.
Note: I found the crowd in this photo distracting so I masked them out in Adobe Photoshop.
1989 & 2010 Craig Maas
Powered by ZENFOLIO User Agreement
Cancel
Continue