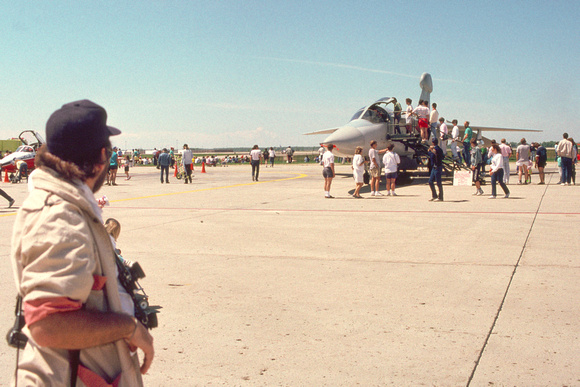 Bob Nelson eyes a EF-111 'Raven' at the Grand Forks Air Force Base (GFAFB) 'Friends And Neighbors Day' on May 27th 1989. A CT-114 'Tutor' of the Canadian Snowbirds can be seen behind him.
The General Dynamics/Grumman EF-111A Raven was an electronic warfare aircraft designed to replace the B-66 Destroyer in the United States Air Force. The USAF contracted with Grumman in 1974 to convert some existing General Dynamics F-111As into electronic warfare/electronic countermeasures (ECM) aircraft. The USAF had considered the EA-6B Prowler, but was reluctant to adopt a Navy aircraft. The EF-111 entered service in 1983 and served until it was retired in 1998. Its crews and maintainers often called it the 'Spark-Vark', a play on the F-111's 'Aardvark' nickname. (Wikipedia)
1989 & 2010 Craig Maas
Powered by ZENFOLIO User Agreement
Cancel
Continue