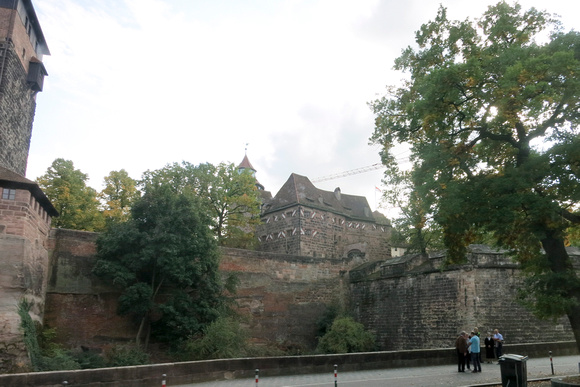 Imperial Castle, Nuremberg, Germany (DE).
The castle, together with the city walls, is considered to be one of Europe's most formidable medieval fortifications. It represented the power and importance of the Holy Roman Empire and the outstanding role of the Imperial City of Nuremberg.
The first fortified buildings appear to have been erected around 1000. Thereafter, three major construction periods may be distinguished:
1. the castle built under the Salian kings respectively Holy Roman Emperors (1027Ð1125);
2. a new castle built under the Hohenstaufen emperors (1138Ð1254);
3. reconstruction of the Palas as well as various modifications and additions in the late medieval centuries.
The castle lost its importance after the Thirty Years' War (1618 to 1648). In the9th century with its general interest in the medieval period, some modifications were added. During the Nazi period, in preparation of the Nuremberg party rally in 1936, it was "returned to its original state." A few years later, during World War II and its air raids in 1944/1945, a large part of the castle was laid in ruins. It took some thirty years to complete the rebuilding and restoration to its present state. -wiki
2019 Craig Maas
Powered by ZENFOLIO User Agreement
Cancel
Continue