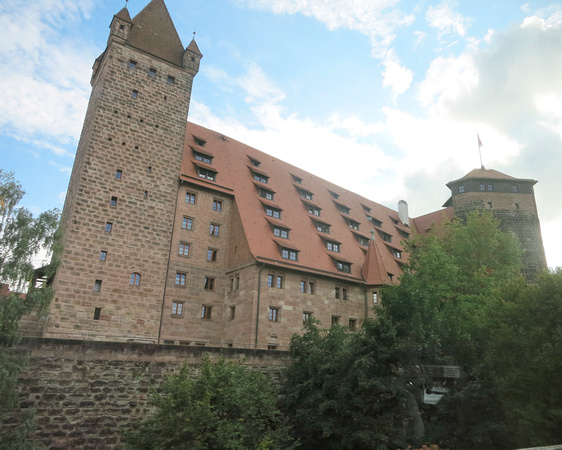 Luginsland Tower. In 1367, the city obstructed the Burgraves' access to the city by a wall in front of their castle, and in 1377, the city erected the Luginsland tower (literally look into the land) near the main gate of the Burgraves' castle, in order to control the activities inside the castle. In 1388/89, there was an armed conflict which was settled. Finally, the Burgraves' Castle was attacked in 1420 by Duke Louis VII of Bavaria and burned down, probably with the consent of the city. In 1422, Sigismund transferred the care of the Imperial Castle to the city, and in 1427, Frederick I, Elector of Brandenburg sold the remains of the Burgraves' Castle to the city. In World War II, the castle was damaged in 1944-45, with only the Imperial Chapel and the Sinwell Tower remaining entirely intact. After the war, the castle was restored under the direction of Rudolf Esterer and Julius Lincke to its historical form, including the Luginsland tower which had been completely destroyed. -wiki
DJH Youth Hostel, Nuremberg, Germany (DE).
2019 Craig Maas
Powered by ZENFOLIO User Agreement
Cancel
Continue