Additional Coverage
GoBison.com has coverage and a video. They also have the Box Score, Play-by-Play, Participation, etc.

Inforum.com has articles on the game by: Jeff Kolpack, Eric Peterson, Kevin Schnepf, Jeff Kolpack again, and Tu-Uyen Tran has an interesting article on Forum photographer David Samson.
They also have Stats, and Photos.
Kevin Schnepf on the SHSU preparing for the Fargodome.

Action In The South Endzone. 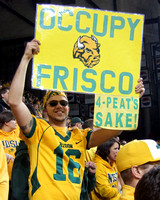