Galleries 15
Collections 1
Groups 1
Created 5-Sep-12
Modified 17-Nov-22
I've never lived on a farm but many in my family have. I grew up with stories of Walt's Farm and his brother-in-law Glenn Buckwalter. My only memories of farm equipment come from the Western Minnesota Steam Thresher's Reunion.


I've been to this annual Labor Day event at seven times. (2012) I have photos from each visit posted on this site.

Dad and mom took Suzanne and I to the WMSTR in 1970. Glenn Buckwalter was the engineer on a big Rumely Old Pull tractor. It was huge, noisy, smelly, and Glenn had me up in the cab for the parade. It had a chain hooked to the steering wheel. No power steering. I turned the wheel has hard as I could. Around and around it would go and yet the tractor would barely turn. As we approached a turn it was obvious we were about to leave the parade; so Glenn took over and turned the heavy wheel much faster than I could manage.

In 1976 I attended with my dad, Suzanne, and my best friend Bob Nelson. Glenn passed aways three years earlier. It was the Bicentennial year and Fargo celebrated its centennial last year so nostalgia was in the air. As teenage boys we were not too excited about attending, we were sporting new SLRs and photography was a new hobby for both of us.

In 1998 I was feeling nostalgic about Rollag and asked to go. Bob wanted to go as did mom. I wanted the full experience including the Thresher man's breakfast so we arrived early. I limited myself to one roll of film. I was most interested in seeing International pickup trucks. International Harvester was the featured name. My grandfather Bill Maas had International pickups for the Maas Store in Sydney, ND. The store name was painted by James Kirkpatrick.

2003 Dad and I invited Duane Maas (Walt's son, dad's cousin) to the 50th anniversary of the WMSTR. I had been reading up on early farming techniques and had scanned old family photos including threshing photos. We arrived early to take part of the Thresherman's breakfast at the Assumption Church building. During the parade Duane was a treasure trove of information about tractors. After the parade we toured the displays and looked at the old cars. I commented on the size of the fly wheels on the static steam engines. We took a bus to see the three Oil Pull tractors pull a 50-bottom plow. We finished the day with tractor displays and steam shovel.

2008 I attend with dad's cousin Gene Maas. We arrived in Rollag at 7:15 am, the site has gotten so big it is impossible to see it all in one day. This was the first time I made it out to the horse farm. Gene posed with all the tractors that were on his father's farm. (Walter Maas)

Gene Maas and I returned to Rollag in 2009. Bob Nelson expressed interest in photographing the event, so we took him along. We spent most of our time watching the working horse power demonstration, the 2:00 pm tractor parade, and then the tractors displays.

2012 was the year I got to visit with both Gene and Duane. We were joined by Jim Peterson and Wayne Tees- Walt's son-in-laws. We looked at some engines, caught the 10 am parade, visited the horse farm, had lunch, watched the Prony Brake test, watched some steam threshing, saw the big steam shovels in action, enjoyed the fashion show, walked the grounds, had supper, and talked with many exhibitors. My goal this year was to concentrate on the people of the WMSTR rather than the equipment. 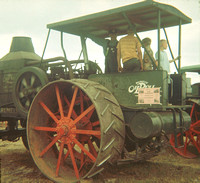 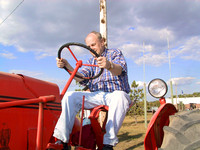 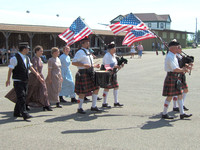