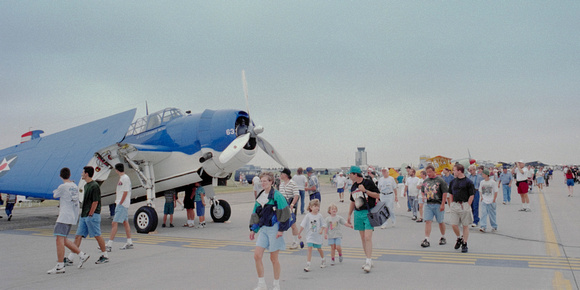 A Grumman TBM "Avenger" a WW-II Navy torpedo bomber on static display at Hector Field.
It is painted as #63, the aircraft flown by former president: Lt. (jg) George Bush.
A PT-17 Kaydet and Sea Fury are parked behind.

In June 1943, future-President George H. W. Bush was commissioned as the youngest naval aviator at the time. Later, while flying a TBM with VT-51 (from the USS San Jacinto), his Avenger was shot down on 2 September 1944 over the Pacific island of Chichi Jima. However, he released his payload and hit the radio tower target before being forced to bail out over water. Both of his crewmates died. He was rescued at sea by the American submarine USS Finback. He later received the Distinguished Flying Cross. -[Wiki]