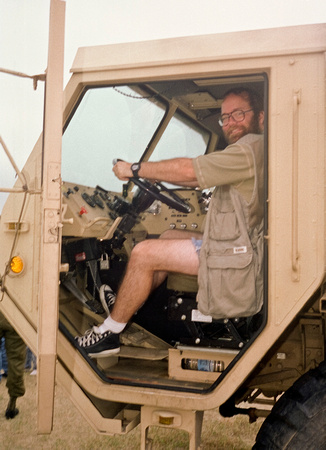 The Heavy Expanded Mobility Tactical Truck (HEMTT) is an eight-wheel drive, diesel-powered, 10-short-ton tactical truck used by the US military and others. In evolving configurations, it has been in continuous production since 1982. The M977 HEMTT entered service with the U.S. Army as a replacement for the M520 Goer. By early 2015, more than 27,000 HEMTTs in various configurations had been produced by Oshkosh Defense through either new-build or re-manufactured. The M977 is built by Oshkosh Corp. It's used as a Cargo Truck, Tanker, Tractor, Load Handling System, CBT, Missile Transporter Erector Launcher, Tactical Fire Fighting, Water Tender, and ProPulse.