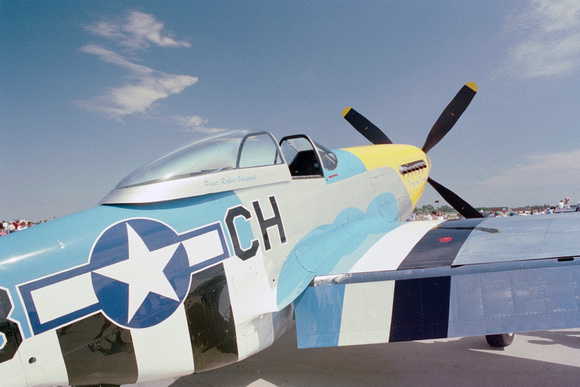 The North American Aviation P-51 Mustang is an American long-range, single-seat fighter and fighter-bomber used during World War II and the Korean War, among other conflicts. The Mustang was designed in 1940 by North American Aviation (NAA) in response to a requirement of the British Purchasing Commission. The Purchasing Commission approached NAA to build Curtiss P-40 fighters under license for the Royal Air Force (RAF). Rather than build an old design from another company, NAA proposed the design and production of a more modern fighter. -[wiki]

Photo by Craig on Saturday, August 12, 1995 at the Fargo Airsho.
1995, 2019 by Craig Maas.
Powered by ZENFOLIO User Agreement
Cancel
Continue