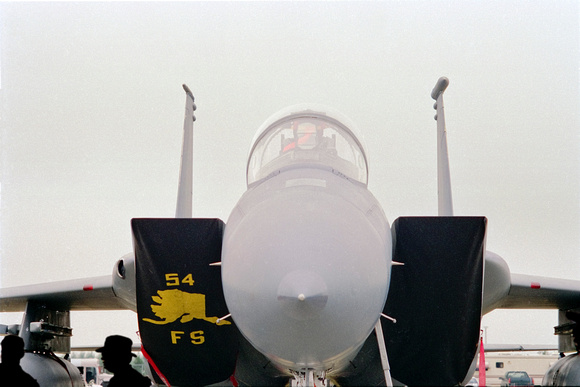 The McDonnell Douglas F-15C 'Eagle' entered production in 1978. These models were fitted with the Production Eagle Package (PEP 2000), which included 2,000 lbs of additional internal fuel, provisions for exterior conformal fuel tanks, and an increased maximum takeoff weight up to 68,000 lbs. The increased takeoff weight allows internal fuel, a full weapons load, conformal fuel tanks, and three external fuel tanks to be carried. The APG-63 radar uses a programmable signal processor (PSP), enabling the radar to be reprogrammable for additional purposes such as the addition of new armaments and equipment. The PSP was the first of its kind in the world, and the upgraded APG-63 radar was the first radar to use it. Other improvements included strengthened landing gear, a new digital central computer, and an overload warning system, which allows the pilot to fly up to 9-G's at all weights. -[wiki]