Created 26-Aug-13
Modified 15-Jun-20
Visitors 13
41 photos
The Commemorative Air Force (CAF) Airpower History Tour came to the Fargo Air Museum. Their B-17G arrived early. The most popular bomber in WW-II, I first saw it in Fargo on August 17, 1987 at an early CAF airshow, and have seen it many times since. It still inspires. The text below comes from Wikipedia and the CAF Airpower website.

Sentimental Journey (44-83514) is the nickname of a B-17G Flying Fortress bomber. It is based at the Commemorative Air Force Museum in Mesa, Arizona. The nose art features Betty Grable, the number one pinup girl of the World War II era. The aircraft's name takes after a song made very popular by Doris Day in 1945.

History
Boeing B-17G 44-83514 was built by Douglas Aircraft in late 1944, and was accepted by the U.S. Army Air Forces on 13 March 1945. Assigned to the Pacific theater for the duration of the war, it was subsequently placed in storage in Japan. In 1947, the B-17G was reconfigured as a RB-17B for a new role in photo-mapping and assigned to Clark Field in Manila. In 1950, the aircraft was transferred to Eglin Field, Florida and converted to a DB-17G for service as an air-sea rescue craft. On 27 January 1959, the aircraft was transferred to military storage at Davis Monthan Air Force Base in Tucson, Arizona. After a few months storage, 83514 was acquired by the Aero Union Corporation of Chico, California, receiving civilian aircraft registration: N-9323Z. For 18 years, the converted bomber flew as a forest fire fighter throughout the United States.

On 14 January 1978, at a membership banquet for the newly formed Arizona Wing of the Commemorative Air Force, Colonel Mike Clarke announced the donation of the aircraft to the CAF for assignment to the Arizona Wing. A contest was initiated by the local media to name the aircraft, which resulted in more than 800 entries, and the ultimate selection of the name "Sentimental Journey" with nose art featuring World War II pinup Betty Grable. Permission was secured from widower Harry James to add Betty Grable in her most tantalizing pose to complete the newly acquired bomber.

To many, the B-17 Flying Fortress is the most recognizable and famous bomber of World War II. Originally designed to meet a U.S. Army Air Corps specification issued in 1934, the prototype first flew on July 28, 1935 and quickly became known as the "Flying Fortress" due to its heavy defensive armament. After several years of evaluation, the B-17B was ordered into production with new turbo-supercharged engines and heavier armament. The first was delivered to the Army in June 1939. The RAF received their first B-17Cs in 1941, and were soon conducting daylight raids over Germany.

Throughout the war the B-17 variants were modified with larger engines, higher capacity self-sealing fuel tanks, more advanced armament such as power-driven gun turrets and under-wing bomb-racks. The B-17F was the first to serve with the United States 8th Air Force. After suffering significant losses in late 1943 due to head-on attacks from enemy fighters, the B-17G was introduced with a chin turret with dual machine-guns. This gave the final variant of the B-17 a defensive armament of 13 guns. 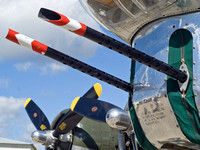 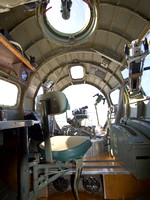