Created 15-Sep-15
Modified 15-Jun-20
Visitors 43
114 photos, 1 videos
The 2015 Klieman Project
After the loss to Montana, two weeks ago, coach Klieman had a number of problems to address. Foremost was his star Quarterback, #11 Carson Wentz. Carson had a high ankle sprain that he played through in the fourth quarter of the Montana game. The game might have gone the other way if Klieman had taken Carson out of the game. Two weeks later, is Carson in good health? Can he run when he needs to? When he wants to? At the 10:13 mark in the first quarter the question was answered: Carson ran 27 yards for a touchdown. Carson was making cuts with his unique style of running. (Think Frankenstein's monster, only faster.) Now that the question was answered, we saw less of Carson running around. I'm sure coach Klieman didn't want to push his luck. (Carson did run six more times for a total of 46 yards.)
The second issue for coach Klieman was his young defense. The defense is a big question mark. They were chewed up in the Montana game, especially in the second half. In this game our defense did not look promising, when Weber State's #1 Cam Livingston grabbed a pass from #10 Jadrian Clark and took it 68 yards for a score at the 4:02 mark of the first quarter. This touchdown came on a fumble by #22 King Fraiser. So by the time the first quarter was over, there was plenty of reason to be nervous in the South End Zone stands. This week saw the return of #6 C.J. Smith in the secondary. The defense found its stride and the Weber offense never scored another point.

This was the week Bison fans got the full measure of Running Back, and Moorhead native: #25 Chase Morlock. Chase took a pass from Carson, with 12:35 left in the half, 55 yards for a touchdown. He did it again at 9:57. This time for 47 yards, and the hometown fans were going crazy. Wide receiver and sixth year player, #82 Zach Vraa finished out the half with a 23 yard pass from Chase for the Bison's fourth touchdown. Zach had to made some moves on the defenders, juggling the ball as he crossed the goal line.

The third issue for coach Klieman was his kicking game. In the Montana game, #19 Ben LeCompte had to do it all: Kick offs, punts, extra points, and field goals. Ben has the skills but the work load is too much. Freshman #36 Cam Petersen was added to the lineup this week. Cam kicked all the extra points, and two field goals at 7:26 in the 3rd Quarter and 13:58 in the 4th Quarter.

Bandana Boy, who sits behind us, was taunting the Weber players. He was yelling at #13 Eric Wilkes, standing on our goal line. Eric took the kick off 100 yards for a touchdown. I turned to Bandana Boy, "Thanks a lot. You jinxed it. You did this last year too." He looked pretty sheepish.

At 6:34 in the fourth quarter, Carson Wentz put together a five play drive capped by a 3 yard touchdown run by #22 King Fraiser. Right in front of us. (See my video) 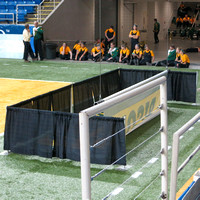 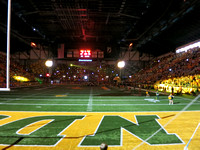 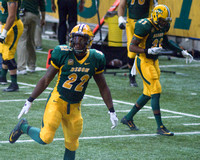 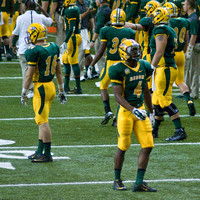 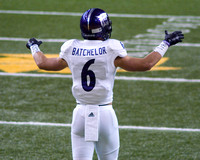 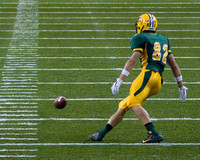 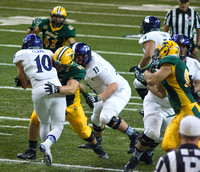 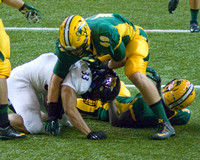 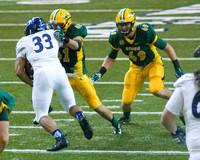