Created 14-Oct-15
Modified 15-Jun-20
Visitors 30
121 photos, 1 videos
Slugfest
Homecoming, isn't this when you schedule an easy team? The Bison host University of Northern Iowa, arguably the toughest conference team NDSU has played since going Division I football. The 'Panthers' were the only team to beat the 'Bison' last year. And they beat them badly.
First Quarter UNI scored first on a 67 yard pass from Sawyer Kollmorgen to Daurice Fountain. With the first 3 plays the Panthers took the lead 7-0 and it didn't look any better when the Bison went three an out. The Bison defense got a stop, as did the Panthers. A Panther three and out, before the Bison ran 7 plays, which allowed NDSU freshman Cam Pedersen to kick a 43 yard field goal. 7-3.
Second Quarter NDSU QB Carson Wentz throws an interception this puts UNI in the end zone six plays later on a one yard run. UNI leads 14 to 3. On the next set of downs the Bison answer with an 11 play drive that covers 70 yards and finishes with a two yard pass to Jeff Illies. The Bison go into the half down 14-10.
The third quarter was a defensive quarter. Neither team gave up any points. The Bison were chewing more of the clock trying to get a run game establish but the Panthers were stopping each drive. It didn't help that Carson threw another interception. This was offset by the interceptions that NDSU Tre Dempsey took off of Aaron Bailey. Yes, UNI lost their starting quarterback with a concussion. There were a lot of injuries in this game. The Bison got a drive started late in the third quarter that ended up in our (south) End Zone at the start of the fourth quarter. The UNI defense bit on the right line motion, so Carson was able to roll out to his left and hit a wide open Jedre Cyr for a touchdown. A fullback, Jedre Cyr, doesn't see the ball much. But he was featured on ESPN Sports Center this morning. The Bison take there first lead of the game 17 to 14. UNI's QB Aaron Baily keeps running, and keeps finding holes in the Bison defense. 5 plays and 75 yards later, Darrian Miller runs in for a touchdown. UNI takes their lead back. Relying mostly on an aerial attach, Carson Wentz moves the Bison 69 years on ten plays to find Darrius Shepherd in the end zone. Bison lead 24 to 21. Just when it looks like the Bison have this game in hand UNI QB Aaron Bailey runs 83 yards for a touchdown. UNI 28, NDSU 24. By now the Fargodome crowd is going crazy. It's loud as hell and even my mom is yelling at the players. Carson fumbles the ball to UNI. The Bison defense holds the Panthers to a field goal which they miss. There is 2:30 left in the game, but our confidence in Carson is boundless. He moves the team 79 yards in ten plays and hits Darrius Shepherd in the end zone one more time. The Bison defense practice against the Hail Mary every week. This week it come in handy as they bat the ball down in the end zone as time expires. The Bison win their Homecoming against the Panthers 31 to 28.
Both teams were very happy to get off the field.
The Bison were hoping to rush against the Panthers, but the stats show they came up short. UNI had 300 yards on 38 carries to NDSU 151 on 40. The reverse was true in the air. UNI was 8 of 17 for 158 yards. NDSU was 26 of 40 for 355 yards. NDSU dominated time of possession 39:08 to 20:52, and fourth down conversions 4 of 4. (UNI was 1 of 2) The game boiled down to Cam Pedersen hitting that field goal in the first quarter.
I'm missing some photos from the fourth quarter as I was shooting some video (Here). There are also better photos when the action too place on the other end of the field. Check the links below for game photos from the Fargo Forum and WCF Courier.

Links:
GoBison.com has an excellent Video along with a full boxscore, that I used extensively to write my photo descriptions. They have participation rosters, play-by-play guides, team stats, and individual stats.
WCF Courier coverage and photos by Matthew Putney
The NDSU Spectrum has coverage of the game with photos.
The Fargo Forum has complete coverage of the game by sports writers:
Video
Bison Media Blog: Post Game Show
Bison Football Show With Chris Klieman
Categories & Keywords
Category:Sports
Subcategory:Football
Subcategory Detail:College
Keywords:
© Craig Maas 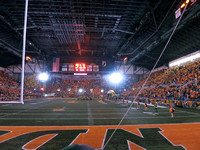 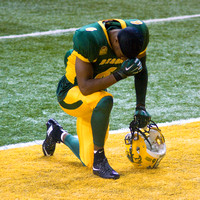 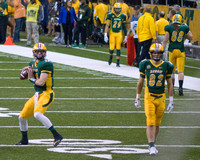 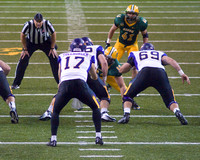 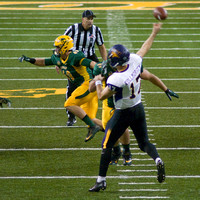 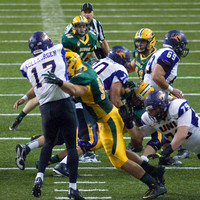 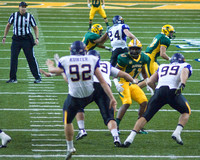 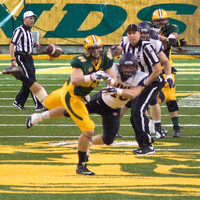